Extinction Rebellion (XR), a non-violent global climate-crisis movement, kicked off a series of protests earlier this month in cities all over the world. They were particularly active in London, where they glued themselves to buildings, left trees for MPs in front of Parliament, and targeted giant asset manager BlackRock, “demanding that major financial institutions starve fossil fuel companies of the money they need to build new mines, wells, and pipelines.”

.@Ed_Miliband's reason to be cheerful this week is that he got a tree from #ExtinctionRebellion & he describes the #ReforestEarth action as a sign that XR is a smartly thought out operation: https://t.co/XmCpiVm6tX So proud to have led this action together with @MatthewShribman! pic.twitter.com/GXSo3cd2k9

(Disclosure: Lisa Rose aka @ecotist is a former work colleague. And even Prime Minister Boris Johnson accepted his tree.)

On Monday, London’s Metropolitan Police banned all Extinction Rebellion protests and started to clear campers out of Trafalgar Square. As of October 16, there had been 1,711 arrests. But that hasn’t stopped XR; they’re still holding protests on the Underground and at other locations, including on top of Big Ben.

Activist and writer George Monbiot, who made a short film with Greta Thunberg about the climate crisis, was arrested on Thursday, and reported on his own arrest:

A climate change protester dressed in a broccoli costume shouts, "Give peas a chance!" as he's arrested in London https://t.co/TFnFTeNOsM pic.twitter.com/qHFw1RnzNl

Mr. Broccoli then appeared on Good Morning Britain, where Piers Morgan and Susanna Reid grilled him about the science of climate change, but he decided to take a call on his “banana phone” instead with the explanation, “I’m just a broccoli at the end of the day.”

Mr Broccoli says he wants people to join the Animal Rebellion movement and is calling on people to eat more plant-based foods.#GMB pic.twitter.com/dVIBcMZRyl

Sometimes a little light humor is welcome relief when it comes to the climate crisis. Thank you, Mr. Broccoli — especially for annoying Piers Morgan.

Everyone knows fish is a staple of the Mediterranean diet. For example, anchovies and sardines make up 30% of all Italian catch and 80% of the Croatian catch in the Adriatic Sea, reports La Stampa [via WorldCrunch]. But the Adriatic is now overfished due to increased fishing — another negative impact of human action on the environment. “Only six out of 47 economically significant species are 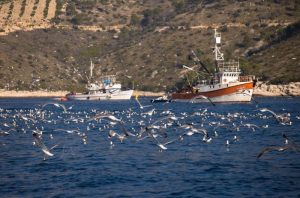 So to reverse this crisis, countries on the Adriatic have come up with the European FAIRSEA Project. It creates a protected 1,500-km zone in the middle of the Adriatic where fishing is forbidden or only allowed in buffer zones two times a week. It’s already working; the hake population, for example, seems to be recovering since the safe zone was created in 2016.

The proposed solution, then, is a mix of measures, regulating fishing intensity and periodically closing some areas in order to allow fish to repopulate. The fishermen, however, must also be taken care of. Simply maintaining vessels has a cost, and each fishing ban is a serious blow to their incomes… But the payoff will eventually be reaped in more fish, healthier fish, larger fish.

Andrew Winston, who advises companies on how they can navigate and profit from environmental and social challenges, published an op-ed on Tuesday for the Harvard Business Review titled, “Corporate Action on Climate Change Has to Include Lobbying.” You can read the entire op-ed here, but his excellent argument is basically this, which I’ve excerpted:

Companies have long allowed a chasm to open up between their own statements and actions on climate and what their government relations and lobbying teams are doing in the halls of power. Most of these companies have also conveniently ignored that their own industry and trade associations have generally been fighting climate policy every step of the way.

With increasing transparency, it’s much harder to hide the disconnect between what companies are saying they’re doing and what they’re actually advocating for behind the scenes. A just-released analysis of corporate lobbying shows that major auto companies, while talking up their efforts on electric vehicles, have lobbied aggressively to fight any real climate policy.

I’d love to see companies also think about their communication and efforts with other key stakeholders beyond government. They can engage customers and employees to change their behaviors and encourage them to use their political voices as well. They can talk to investors more bluntly about what climate change means for their business and why they need policy that helps move things along.

In my book The Big Pivot, published in 2014, I laid out 10 strategies to shift business fundamentally toward sustainability. One was about setting science-based goals. Another chapter asked companies to “Become a Climate Lobbyist.” Over the last five years, science-based goals have become common, but climate lobbying didn’t happen.

I hope the time has finally come.

Ever dream of living on the beach, with a beautiful sea view? Yeah, you might want to rethink that.

A recent National Bureau of Economic Research paper, “Mortgage Finance in the Face of Rising Climate Risk,” rightly points out that risk due to climate change becomes financial risk. And John D. Macomber, a senior lecturer in the finance unit at Harvard Business School, says that there are five choices in resilience. He lists and explains them in the Harvard Business Review:

Reinforce: Houston’s Texas Medical Center invested millions in flood bulkheads, sky bridges, elevation of electrical equipment, and more after Hurricane Allison in 2001. So when Harvey hit, it was resilient. It made economic sense for the hospital.

Retreat: Small-business owners in the flood-hit Ellicott City, Maryland, had to abandon the historic downtown for higher ground. It’s sad for Ellicott City as a whole, but it was the best financial decision for those businesses.

Rebound: Learn to live with water. This means building extra-high first-floor elevations and having basements that can be quickly pumped out. (Personal example: My brother’s house flooded four times on the Delaware River flood plain. So all the houses in his neighborhood built up, with an extra story, and the ground floor became a “basement” that could withstand flooding and be quickly renovated. But he might fall under “retreat,” as in the end, he sold.)

Rebuild: Your house is wiped out, FEMA helps rebuild. Will this money always be in place? There are still families in Florida’s Panhandle who haven’t yet received help from last year’s Hurricane Michael, much less Puerto Rico’s Hurricane Maria in 2017. And what happens if you get hit again?

Restrict: Mortgage and insurance companies are simply going to refuse to cover houses in high-risk areas, or the costs become prohibitive. In the case of insurance, they already do refuse.

Activist and actress Jane Fonda got arrested last Friday for protesting the climate crisis at the US Capitol. She explains to CNN’s Christiane Amanpour why she feels so strongly about the issue that she’s moved to Washington, and she intends to “get arrested every Friday.”

It’s the US’s turn in 2020 to host the G7 summit, and acting White House chief of staff Mick Mulvaney said on Thursday that the climate crisis will not be on the agenda. Mulvaney also announced that the summit would take place at Trump National Doral near Miami from June 10-12.

Electrek reported on August 31 that at this year’s G7 summit in Saint-Jean-de-Luz, France: 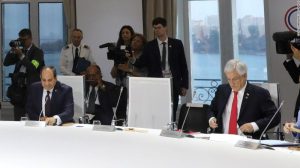 The crucial climate change, biodiversity, and oceans meeting was held on Monday, and world leaders discussed how to reduce carbon emissions and the Amazon rain forest fires, among other issues.

Trump said he couldn’t go because he had meetings scheduled with Angela Merkel and Narendra Modi, but the German and Indian leaders were both at the climate change meeting. (That’s Trump’s empty chair, and that’s Merkel’s hand on the far right.) Trump’s aides went to the meeting without him.

Has Trump already scheduled meetings that make it impossible to discuss the climate crisis this far out?

Democratic presidential candidate Bernie Sanders had this to say about the announcement:

Not only is Trump using the powers of the presidency to enrich himself, which is blatantly unconstitutional.

He is ignoring a massive international crisis that threatens humanity.