Climate Crisis Weekly: Jane Fonda arrested for protesting, how to talk to your kids about the climate crisis, more

Jane Fonda was arrested by the US Capitol Police during a climate change protest on Friday. Fonda was one of 16 people who were arrested for “‘unlawfully demonstrating on the East Front of the U.S. Capitol,’ Capitol Police communications director Eva Malecki said in a statement to Variety.”

Fonda’s website states that she has moved to Washington, DC, and implemented Fire Drill Fridays, “to be closer to the epicenter of the fight for our climate. Every Friday through January, I will be leading weekly demonstrations on Capitol Hill to demand that action by our political leaders be taken to address the climate emergency we are in. We can’t afford to wait.”

Fonda says that she was inspired by Greta Thunberg and the youth climate strikes. She is calling for a Green New Deal, among other demands.

Lily Tomlin’s protest-loving character, Frankie, who pairs with Jane Fonda in Grace and Frankie, would be ever so proud of her buddy’s protest arrest.

CIVIL DISOBEDIENCE: New video shows actress Jane Fonda being arrested on the steps of the U.S. Capitol during a climate change protest, with Fonda demanding urgent action on a Green New Deal and fellow protesters cheering as she was led away. https://t.co/OFdgEGuLb9 pic.twitter.com/K8bVWbbYgq

Kids and teens aren’t just talking about climate change and observing it in the news. They’re marching, and writing letters, and striking. They’re watching Greta Thunberg and groups like Extinction Rebellion take action. 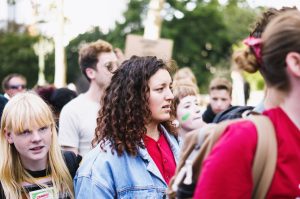 “More than 7 in 10 teenagers and young adults say climate change will cause a moderate or great deal of harm to people in their generation,” reports the Washington Post. They’re frightened. (I know the feeling.)

So what’s the best way to talk to your kids about climate change? The New York Times spells it out very clearly in logical steps.

On October 8, the Verge ran a story about how cocaine is causing climate change and deforestation, as well as migration, according to reports that focus on Honduras, Costa Rica, and Guatemala. Those areas are suffering some of the highest rates of deforestation in the world. They explain:

To move cocaine to its North American consumers, South American drug traffickers cut through Central America. To avoid law enforcement, the traffickers are using increasingly remote routes, including protected national forests. To launder their money, they invest in ranching and agriculture, two businesses notorious for bulldozing and burning forests to make way for livestock and crops.

So what can be done? Researchers say to protect the people who live in the forests. Or as the article puts it, “Protecting the local people protects the local forest — and in turn, protects the entire planet.”

Japan hasn’t even had a chance to catch its breath after Typhoon Faxai, and now Typhoon Hagibis — which might cause the country’s heaviest rain and winds for 60 years — is bearing down on the country. Climate change is causing stronger, more intense storms.

Faxai was one of the strongest storms to hit Tokyo in a decade, with record-breaking winds, and Hagibis might be worse. Faxai damaged 30,000 homes.

The BBC says: “It could be the strongest storm the country has faced since Kanogawa Typhoon in 1958, which left more than 1,200 people dead or missing.”

Some depressing statistics from Unilever (and yes, they themselves use a lot of plastic):

Just 14% of the plastic packaging used globally makes its way to recycling plants, and only 9% is actually recycled. Meanwhile, a third is left in fragile ecosystems, and 40% ends up in landfill.

Now the good news, which can also be found on the link above. Unilever is committing to use less plastic, better plastic, or no plastic by moving to what they call a “circular economy”:

This means that materials constantly flow around a ‘closed loop’ system, rather than being used once and then discarded. As a result, the value of materials, including plastics, is not lost by being thrown away.

The consumer goods giant, co-headquartered in London and Rotterdam,  announced this month that it will work to achieve the following by 2025:

This includes refills and reusable packaging. They are also looking at glass, aluminum, and paper, as well as package design. Here are just two examples:

In France, we are piloting a laundry detergent dispensing machine in supermarkets for our Skip and Persil laundry brands to eliminate single-use plastic.

These are encouraging steps being taken by an enormous fast-moving consumer goods company — because it has to come from manufacturing companies like Unilever, who are encouraging other companies to get on board. (Maybe they could have a stern chat with Nestlé and Tim Hortons in Canada.)

Now, this is definitely good information to share with your kids (see above).

On Wednesday, a 91-year-old man named John was arrested for protesting the climate crisis in London. (John, you forgot your nose ring.)

John is 91 years old and has just been arrested for protesting outside the Cabinet Office.#ExtinctionRebelion @LBC pic.twitter.com/FBQqxAsu13

#FridaysForFuture is still at it across the globe (just search the hashtag on Twitter), and Greta Thunberg, who didn’t win the Nobel Peace Prize yesterday, didn’t let that stop her as she led a climate crisis strike in Denver — where a record-breaking temperature swing of 70 degrees Fahrenheit occurred this week.

But here’s something to make you smile as you start your weekend from the Natural Resources Defense Council — the optimism of youth.

Need a little boost of hope and inspiration today? We asked the next generation of climate activists what they're hopeful for. Their answers reaffirmed what we already knew: our future is in good hands. 🌎❤️🙌 pic.twitter.com/2kVWQGgCVC