Extinction Rebellion: who they are, and what they want 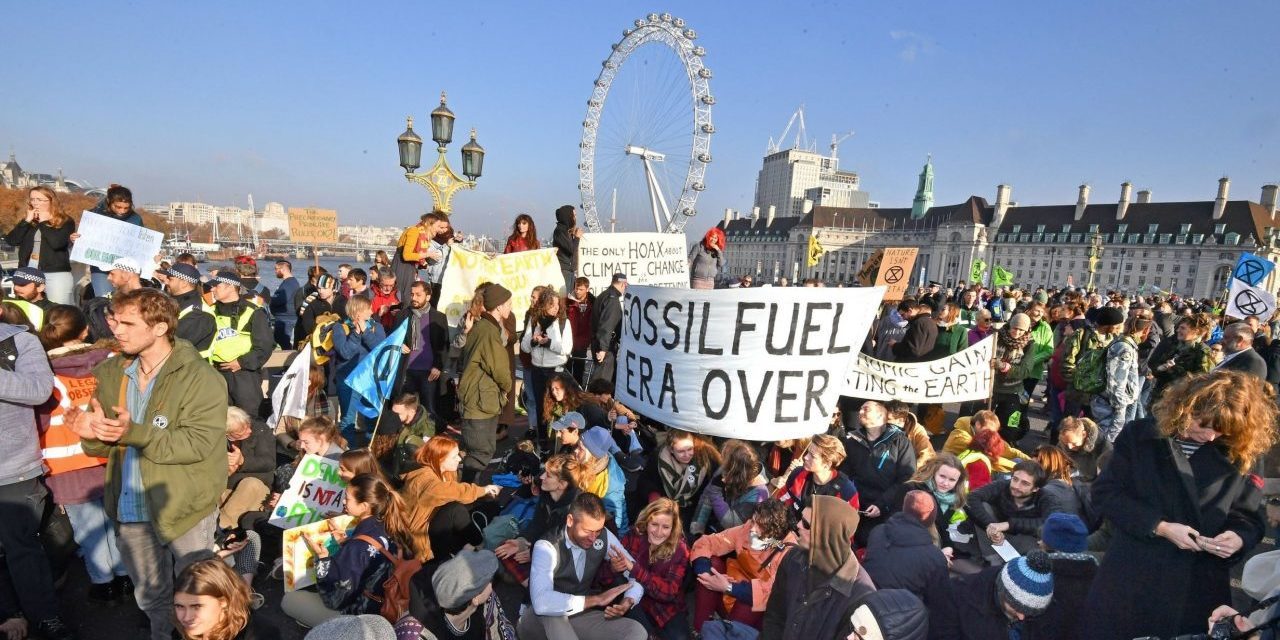 Extinction Rebellion (XR) is busy making headlines today with global protests. So what do they have to do with green energy? In short, a lot. Here’s an explainer.

In Extinction Rebellion’s own words, it’s “an international movement that uses non-violent civil disobedience in an attempt to halt mass extinction and minimize the risk of social collapse.” XR launched in 2018 and it has active groups in dozens of countries. They have 298,000 followers on Facebook.

In the UK, a YouGov poll that surveyed 3,000 people suggested that the majority of their support comes from 18- to 24-year-olds, with 47% “strongly supported” or “somewhat supported” the disruption of traffic and public transport to highlight Extinction Rebellion’s aims. Support drops as ages climb. But images of the protests show people of all ages and backgrounds.

I was there yesterday. I met farmers, I met teachers, I met scientists, I met lawyers, I met grandparents, I met mothers and fathers, and I met children. These are the concerned people of the world.

“Leave me alone, you’re hurting me, I’m 75 years old for god’s sake,” he said as officers lifted him by the arms'#ExtinctionRebellion pic.twitter.com/8od19XkeLN

Click here to watch a video of farmers in the UK who explain why they have joined the movement.

Yesterday, XR began the International Rebellion: “Together, we will peacefully occupy the centers of power and shut them down until governments act on the Climate and Ecological Emergency.”

“We’re here for ourselves, we’re here for those yet to be born”@GeorgeMonbiot reports from #ExtinctionRebellion protest pic.twitter.com/sbue5QgDsY

Ongoing protests are expected in around 60 cities. Protests have taken place in the US, the UK, Germany, Spain, Austria, France, and New Zealand.

A group of protesters have poured fake blood on Wall Street’s famous “Charging Bull” during an “Extinction Rebellion” demonstration in New York. The event is to raise awareness of the climate crisis' potentially disastrous effects. 📷; Timothy A. Clary/ AFP pic.twitter.com/QAnnVA42My

Protesters put up a tent camp outside the Rijksmuseum in Amsterdam, and in Paris, around 1,000 activists occupied a shopping center.

Mumbai activists took part in a “die-in” — around 250 people lying down as if dead.

Today, in London, protesters glued themselves to the underside of a truck and the Department for Transport building. They also put 800 potted trees outside Parliament. The trees have been dedicated to MPs. There have also been many other demonstrations around London.

Protests are expected to last for 30 days and beyond, and Extinction Rebellion has previously staged other protests. Planned protest events across the globe are listed on their website — and it’s a really long list.

We're sorry… We don't want to disrupt you, your families and your loved ones but the inaction of our governments on the climate and ecological emergency is a death sentence. We are terrified, we are angry and we have to #ActNow. Join us in the streets – #InternationalRebellion. pic.twitter.com/fiTIDL4Ubn

In the words of Mikaela Loach, 21, from Edinburgh:

I’ve spoken to my local MP, I’ve taken part in protests, I just feel like I haven’t been listened to. I have been changing things in my lifestyle for a long time to try and be more eco-friendly, but I had a realization a few months ago that it doesn’t matter if I go vegan or zero waste if the government doesn’t do anything. There need to be big structural changes.

In other words, XR is taking the “squeaky wheel gets the oil” approach to pressuring governments and private organizations to make real, positive changes to urgently deal with the climate crisis. XR doesn’t feel that quiet protests like petitions and letters will make a difference.

XR wants zero carbon emissions by 2025, and they want governments to tell the truth about how bad the climate crisis is. This would require unprecedented political commitment and consensus. (British prime minister Boris Johnson called them “uncooperative crusties” and “importunate nose-ringed climate change protesters” today, so it’s probably safe to say that XR doesn’t have Johnson’s support.)

They also want a citizens’ assembly to oversee the changes — a serious grassroots involvement. This would require a massive ramp-up of green energy like solar and wind, higher carbon taxes, a reduction in the consumption of dairy and meat, and severe flight restrictions. Gail Bradbrook, an XR cofounder, said in April:

This is not about fiddling around the edges, and adding a few solar panels to a few roofs; we have left it so late that we have to step up in a semi-miraculous way to deal with this situation.

I want to see people sitting in a room and bringing the solutions and being real together and saying how do we get out of this? It’ll bring the best out of ourselves through that process.