Along with the announcement of the huge tax hike in the new republican tax bill, we have some other astounding ignorance coming out of the titular heads of government in the US today.  Rick Perry, who has received over $11.6 million from the fossil fuel industry in the course of his political career, soliloquizing about his recent experience in Africa, claimed that fossil fuels save lives and prevent sexual assault, at a discussion on energy policy sponsored by Axios and NBC news. Yes, really, he said that.  Full quote below.

“I just got back from Africa, I’m going to finish up with this, because I think I heard a lady say there are people dying. Let me tell you where people are dying, is in Africa, because of the lack of energy they have there. And it’s going to take fossil fuels to push power out into those villages in Africa, where a young girl told me to my face, ‘one of the reasons that electricity is so important to me is not only because I’m not going to have to try to read by the light of a fire and have those fumes literally killing people.’ But also from the standpoint of sexual assault. When the lights are on, when you have light that shines, the righteousness, if you will, on those types of acts. So from the standpoint of how you really affect people’s lives, fossil fuels is going to play a role in that. I happen to think it’s going to play a positive role.”

There is an important point here: people are dying.  In fact, the number of people dying per year due to pollution was recently pegged at 7 million by WHO and 9 million by the Lancet – who also point out that this number equals 15 times as many people who die from war and all forms of violence worldwide per year.  And it is true that a lot of these people, largely the global poor, are dying because of lack of electricity – most of the deaths accounted for in those studies were due to pollution from indoor heating, lighting and stoves.  These jobs could be done with electricity, so if people in poorer regions had electricity, then there would surely be less death, all other things being equal. It’s also possible that more public lighting could help to reduce sexual assault, though that statement seems more of a stretch.

But the primary problem with Perry’s statement is: these millions of global deaths come from fossil fuels.  The indoor air pollution deaths largely come from coal or wood fired stoves and kerosene lamps.  Coal is a fossil fuel.  Kerosene is a fossil fuel.  If Rick Perry is worried about fumes killing the young girl in his story, then he needs to be worried about the source of those fumes: fossil fuels. But since fossil fuels pay the bills, he’s got a blind spot – such a blind spot that apparently he doesn’t even remember that coal and kerosene are fossil fuels to begin with. As Upton Sinclair said, “it is difficult to get a man to understand something when his salary depends upon his not understanding it.”

Add that to an oil-backed EPA head who doesn’t know what the Paris Agreement says and appoints people who think the air is too clean, and it seems like there’s a bit of a problem with the stewards of our environment at the moment. 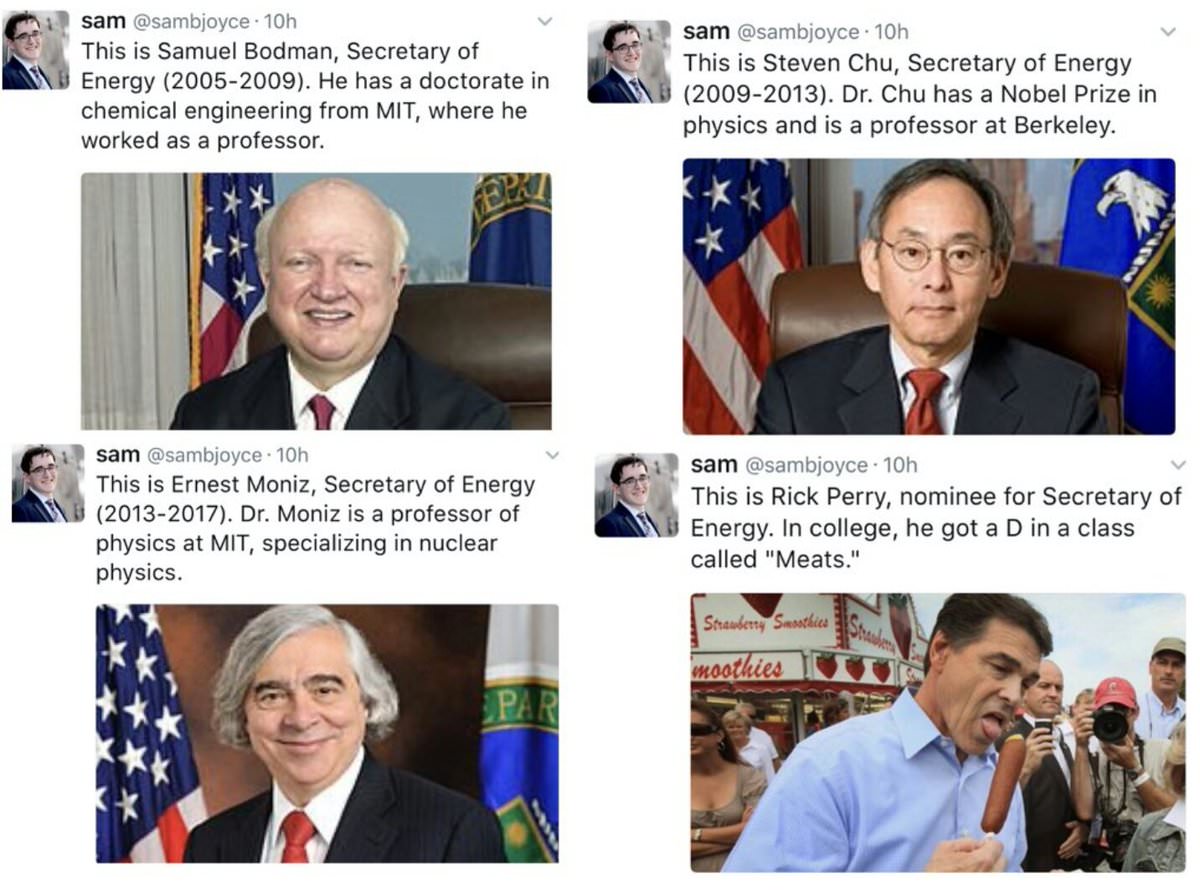 Not only does Perry not understand what a fossil fuel is or how they cause deaths, but he doesn’t seem to understand much about how rural poor areas work. Some ~90% of Africa is not served by an electric grid.  In order to deploy electricity to rural areas in Africa where the grid doesn’t exist, what needs to happen is either they all need to be connected to a national grid, with expensive infrastructure costs and transmission losses, or those rural areas need to set up their own microgrids.  The former option is suited to fossil fuel plants, the latter is not. It is unlikely that a rural African village of 100 people would be able to build a coal power plant.

However, it is much more likely that they could assemble a windmill from scrap or get a few repurposed solar panels to run lights and/or stoves around the village, and what’s better is that this is a much more permanent solution, which doesn’t require trips through the savannah to pick up more kerosene.  And we don’t need to just theorize about this, microgrids from Tesla are already helping islands get off fossil fuels or recover from disasters, with quick deployment times that require much less widespread infrastructure investment. There are other companies trying to serve the needs of Africa’s rural poor with electric solutions, like Off-Grid Electric, which installs small solar+battery installations in rural Africa, the Electric Bike Co. which we covered a few months ago and wants to deploy electric bikes to rural communities, and another startup with a solar-powered bike idea – notably, that bike is not coal powered.  There’s much more sun in Africa than coal.

But Rick Perry isn’t just pushing for the deployment of expensive, deadly fossil fuels in Africa, he’s pushing for them here at home too. Instead of working with energy storage technology we have available today, Perry has asked that the federal government require grid managers to overpay for “reliable” coal power (and nuclear) for baseload generation capacity, effectively subsidizing coal even further than it already is – already receiving its part a global $5.3 trillion in subsidy due to unpriced externalities which affect the health of everyone and everything on Earth.

It is clear that fossil fuels make no more sense for Africa than they do for anywhere else. They are dirty, they are deadly, and they are expensive, and we need to quit them, globally, as quickly as possible. And it’s troubling that the person in charge of the US’ energy policy, who once forgot about the department he is now acting as head of, seems to know so little about energy.