Constructing new wind and solar projects would be less expensive than continuing to run 74 percent of existing U.S. coal plants, according to a new study. That number jumps to 86 percent of coal plants by 2025.

The study from new energy and climate policy firm Energy Innovation and Vibrant Clean Energy says the U.S. has entered the “coal cost crossover,” a period in which existing coal is increasingly more expensive than cleaner alternatives.

For the study, a coal plant’s marginal cost of energy (MCOE) was compared to the lowest levelized cost of energy (LCOE) for wind or solar resources localized around that coal plant, within 35 miles. The researchers claim the methodology made the analysis “conservative, considering most coal, wind, and solar all travel from more remote locations to load centers via transmission.”

The study claims that in 2018, 211 gigawatts of existing U.S. coal capacity (74 percent of the fleet) “was at risk from local wind or solar that could provide the same amount of electricity more cheaply.” That number is estimated to increase to 246 GW by 2025 (86 percent). Energy Innovation notes,

“Due to the rapid recent cost decline of wind and solar, the combined fuel, maintenance, and other going-forward costs of coal-fired power from many existing coal plants is now more expensive than the all-in costs of new wind or solar projects. This cost crossover raises substantial questions for regulators and utilities as to why these coal plants should keep running instead of new renewable power plants.”

The report includes a number of maps illustrating the data. Below are two maps showing the cost of operating existing coal-fired power plants compared with building new wind or solar within a 35-mile radius, in 2018 and 2025, respectively. 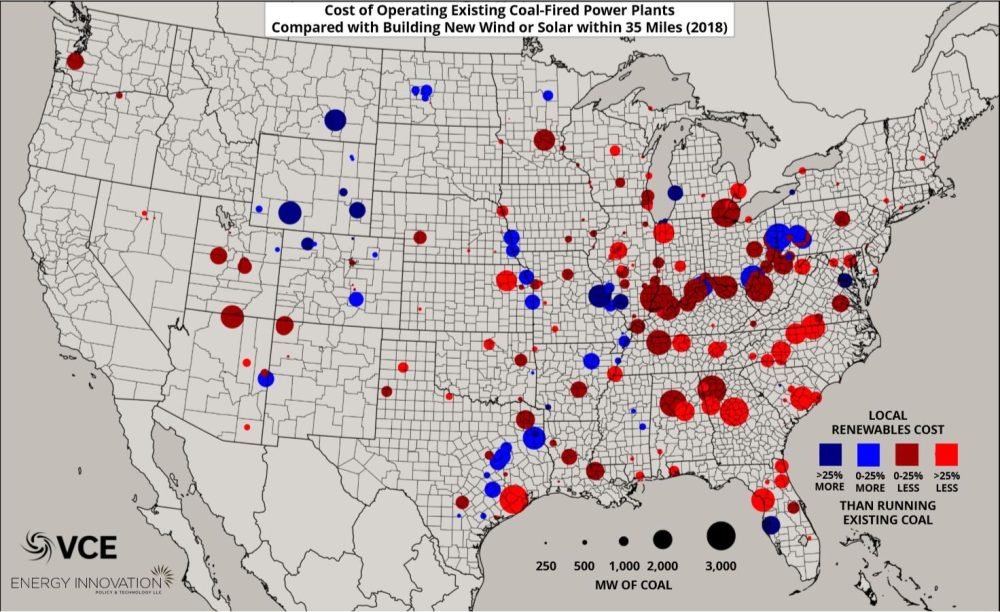 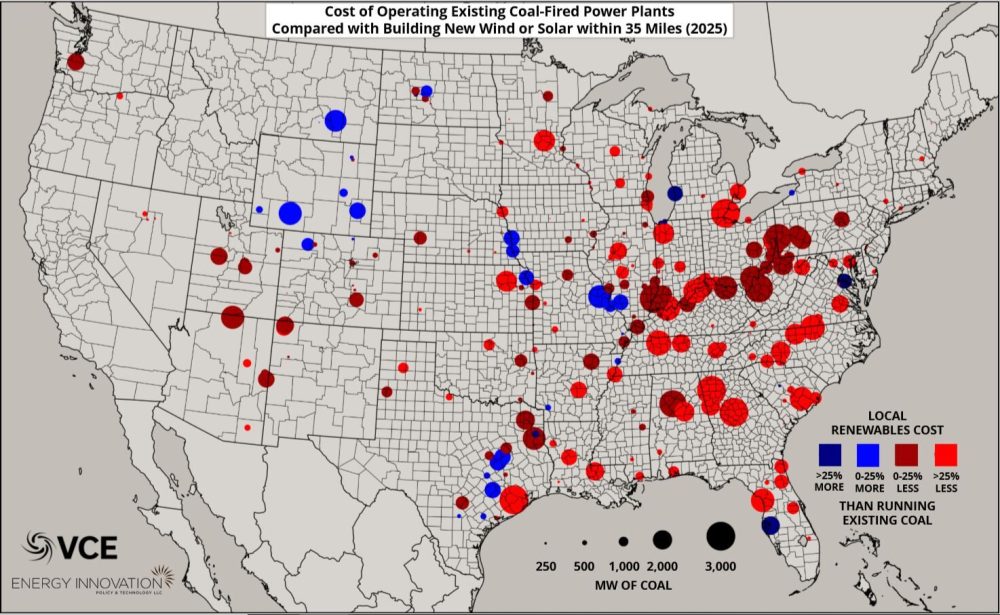 In the end, the study determines the U.S. has reached a “sunset scenario” for coal power. The researchers conclude,

“Coal’s remaining rationale was that it was cheap if externalities weren’t included, but even that rationale is vanishing. Our report shows that coal is increasingly uneconomic against new local wind and solar resources.”

The belief that building new wind and solar can be cheaper than running an existing coal plant certainly isn’t new, but this study summarizes and presents it on a large scale.