A Tesla Semi prototype made a rare appearance at Pixar’s headquarters – along with several other electric vehicles.

Last year, Tesla had two prototypes going through an extensive testing program and they were spotted around the country doing long-distance travel tests.

However, we haven’t seen much of the Tesla Semi prototype this year aside for a very interesting stop at a California Highway Patrol Inspection Center last month when the CHP reported that the electric truck prototype was “meeting or exceeding the range estimates.”

We haven’t seen any other Tesla Semi prototype until now.

Tesla brought an electric semi truck prototype to the Pixar headquarters in California (pictures via icon4x4 on Instagram): 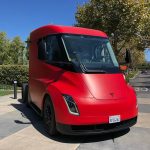 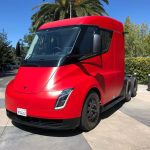 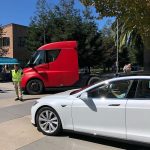 It’s the same red Tesla Semi prototype as the one spotted doing some range tests with an almost full load of 75,000 lbs last month.

It looks like Pixar was holding a showing of “alternative fuel” vehicles and they had quite a few electric vehicles there.

Some more common ones, like the Tesla Model S and the BMW i3, but Tesla Semi wasn’t the only special or rare electric vehicle there.

The brand new Drako GTE all-electric supercar was also at the event, along with some electric conversions and more (pictures via i_rekt_mi_vw on Instagram): 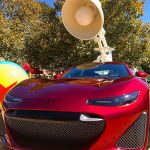 As for the Tesla Semi, it was supposed to be released in 2019, but it has been delayed.

The company is focusing on bringing the Model Y to market and it is forcing Tesla to delay the launch of the production version of the Tesla Semi until the end of next year.

Last year, CEO Elon Musk said that they found opportunities to extend that range during testing and he said that the Tesla Semi production version will have closer to 600 miles of range.