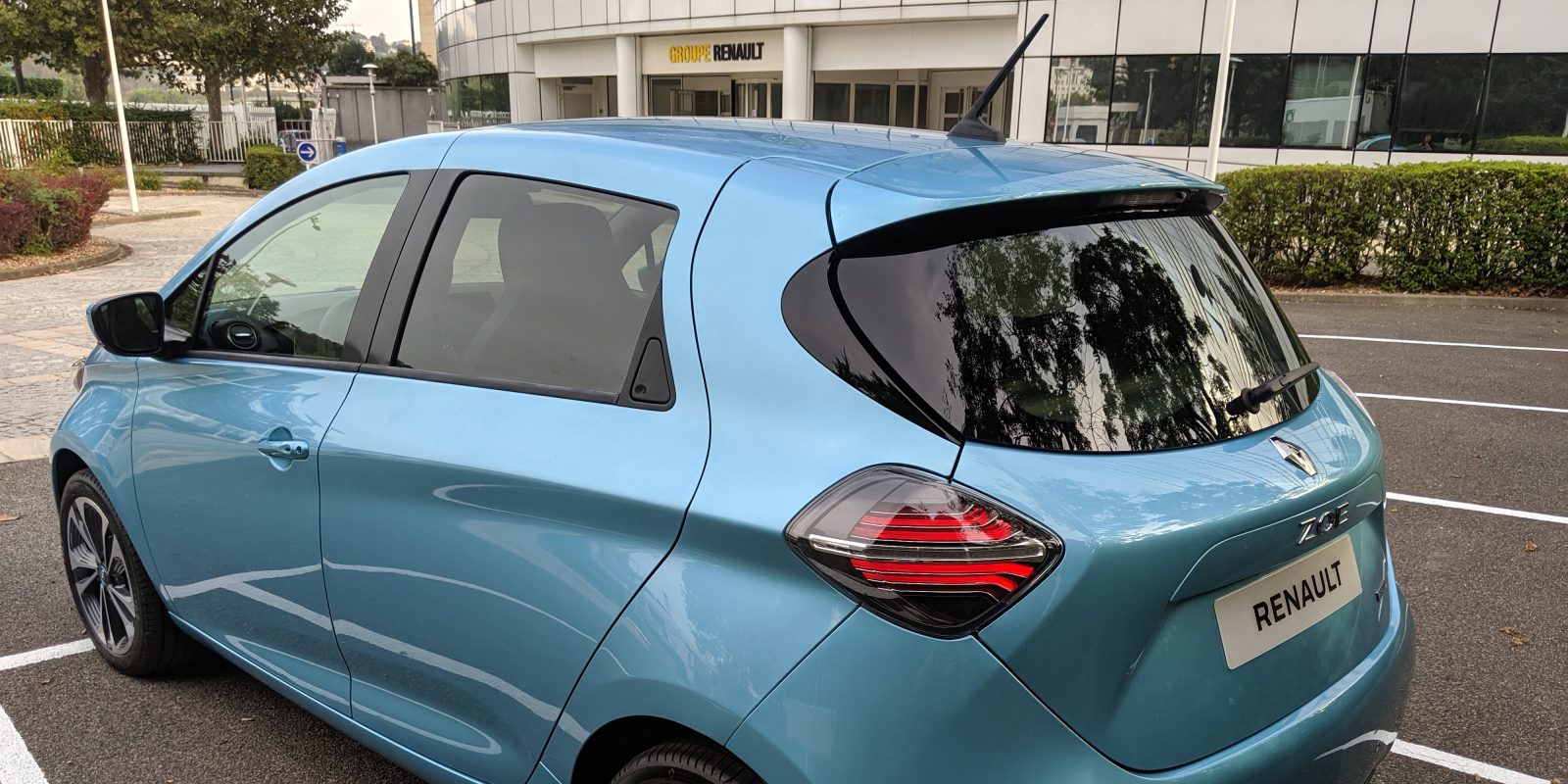 Renault’s new 52 kWh, 100 kW Zoe was announced in June with the additional 50 kW of DC charging, but we got the rare opportunity to check one out at Renault’s Paris HQ this week. What we saw was an impressive and important vehicle that will fit into many more Europeans’ lives.

Renault departed the US in the late ’80s after it sold its share of AMC to Chrysler. But in Europe, it is the top EV player with its lineup of electric vehicles including Kangoo and Twizy. Its best selling EV, the Zoe, dominated unit sales until the arrival of Tesla’s Model 3 and the 2nd generation model still won in July, even after the 3rd generation model was announced.

I got to drive the 2nd generation Zoe at last year’s FIA electric vehicle camp as part of the Paris Mondial motor show. I came away wanting a bit more, finding its performance and size somewhere between a Fiat 500e and a Nissan Leaf.

The biggest improvement is the 52 kWh battery pack which is up from 40 kWh using the same pack size. I’m told LG was able to improve its cell density by over 20% from the previous model. That compares to the extra 10% GM/LG got out of the 2020 Chevy Bolt (60-66 kW). It is a bit heavier but with the improved output and bigger motor it brings more speed to the table.

LG Chem is still making the battery packs for the 3rd generation Zoe. But LG will no longer be Renault’s exclusive as China’s CATL will also eventually ramp up battery packs in specific markets for other Renault electric vehicles.

Renault tells me that they’ve procured enough batteries so that it won’t have bottlenecks there (vs. producing cars) for the foreseeable future.

The higher output battery also let Renault up the power of the motor to 100 kW from 80 kW, a big 25% improvement.

Renault has always impressed me with its onboard 22 kW AC 3 phase charger. As far as consumers go, that’s about the biggest AC charger on an EV. Compare to a current Tesla 11 kW after discontinuing their 22 kW dual inverter option. But as DC fast-charging stations proliferate, consumers are demanding access to 50 kW or higher charging on the road. I think Renault could have stepped up this charging to at least 100+ kW here but 50 kW is much better than 22 kW AC only. The Zoe will get the typical 50 kW “most of the way to 80% in under an hour”.

The bigger CCS combo charge port with the additional DC plugs at the bottom required Renault to increase the size of its diamond logo charging door which results in the most striking difference between the current Zoe and the new Zoe.

Renault refreshed the interior of the Zoe and included a large 10-inch display. We can’t yet report on what it is like to use or how the Gen 3 Zoe drives. That will have to wait for Micah’s first test drive in two weeks. But all indications are that the more powerful motor and battery output should significantly improve its performance. We don’t expect a hot hatch to emerge but this car is no slouch either.

The seats and interior are partially made of recycled seat belts and water bottles so it definitely hits those green credential checkboxes. Size-wise, this is a small C-type European car which represents about a third of the market. That said, the front is very comfortable and Gilles Normand, SVP, Electric Vehicle Business Unit at Renault gave us a look at how his 6 foot plus (nearly 2 meter) frame fit both in front and back.

Speaking of Gilles, he’s got an interesting podcast episode up on his thoughts on the future of electric mobility.

Normand was also very optimistic about the prospects of the new Zoe, noting that they were up over 50% from last year in sales and expected growth again with this new Zoe leading the way.

Yes, the Model 3 took Europe by storm and it still leads the overall sales for 2019. But the Zoe is Europe’s own leading EV, made just a few kilometers away from Paris. The 2020 Zoe is a European car, falling into the B type platform that with the larger C platform, dominates EU sales with about 2/3rds of the market. Its 50% growth rate should be applauded.

As I said before, I think Renault dropped the ball with 50 kW DC charging. To get a more petrol-like filling experience, 100 kW is pretty much a baseline and that’s what new EV customers want. For city drivers, that pain is even more acute when they have to fill up for an hour on their way out of town.

But Renault said from the outset that they didn’t want to raise the starting price of the Zoe and with all of the other improvements, they had to cut somewhere.

Renault also has mostly had the European EV market to itself. However, Honda’s E and Mini E are adding more stylish options and VW’s ID.3 are taking the Zoe head-on. Also Renault’s Alliance partner Nissan has the bigger Leaf improvements as well.

Micah will have a lot more on the new Zoe 3.0 in a few weeks so stay tuned Europe!