Electric bicycles are often touted as the perfect “last mile” vehicle. Whether it’s driving from the suburbs to a spot just outside the city or taking public transportation to the stop closest to your home or office, electric bicycles are a convenient way to cover that first or last leg of the trip.

When it comes to last mile e-bikes, nothing beats a convenient folding electric bicycle to stash in your trunk or under the subway seat. Now Gocycle is introducing their newest model, the Gocycle GX electric folding bike. And this is one folding e-bike you won’t want to miss.

While folding electric bicycles are great in concept, many of them fail to deliver a convenient folding process.

Some of them require too many folding steps or have awkward latches that require gorilla hands to open. Others fold nicely but weigh a ton. And most don’t roll well when folded, making it feel like you’re carrying around a filing cabinet.

The Gocycle GX was designed to improve upon all of these common folding electric bicycle complaints. 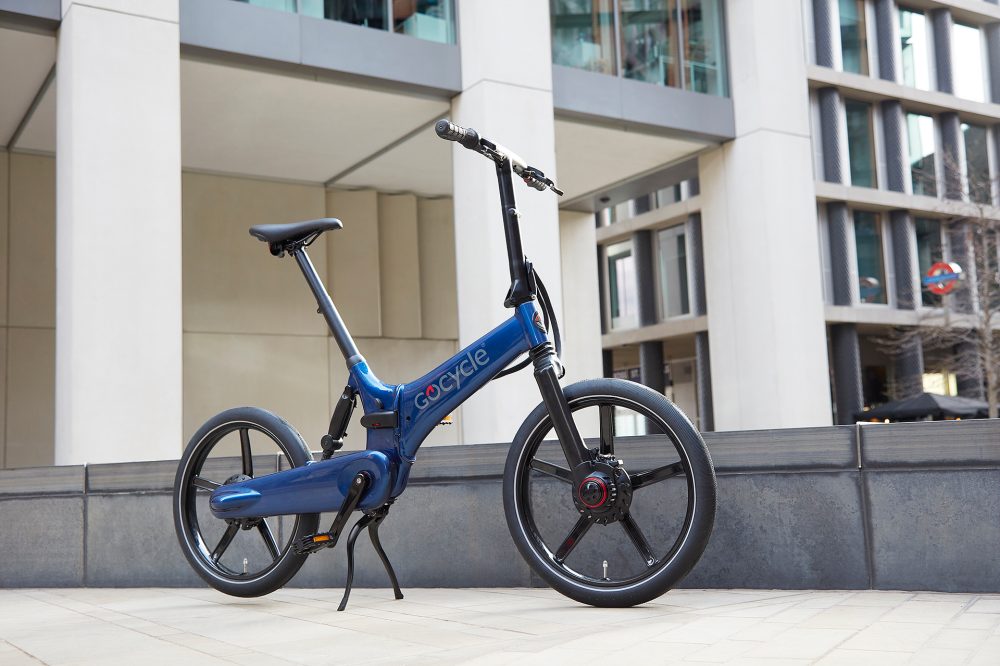 A quick folding procedure was a critical part of the design process.

The Gocycle GX can be folded and stowed in 10 seconds, collapsing down to just a fraction of its original size.

Once folded, the Gocycle GX rests on both wheels so that it can be easily rolled by its user. With two wheels on the ground, the user doesn’t need to balance the bike while it rolls.

The Gocycle GX can even still be rested on the center jack stand, preventing the bike from falling over when the user isn’t holding it.

The bike weighs 17.8 kg (39.2 lbs), meaning it can still be lifted if necessary, though it’s not the lightest electric bicycle out there.

A folding electric bicycle that folds well is nice, but to be a proper commuter bike then it better ride well too.

The Gocycle GX can reach speeds of up to 20 mph or 25 km/h, depending on the country of sale. Combined with a torque sensing pedal drive control, that should keep it street legal in just about any country. Speaking of which, the Gocycle GX will be available through resellers in the US, Canada, UK and EU.

The range is listed as up to 65 km (40 mi) from a 22 V and 13.7 Ah (300 Wh) battery, but the range will vary depending on the riding mode. With higher assist levels (selectable through a connected smartphone app), expect to see a reduction in range.

The battery is also hidden inside the frame and easily removable, meaning you could leave the bike parked outside while bringing your battery in to charge. However, with a bike this small, you could also easily stash it under your desk or in the corner of your office.

The Gocycle also features a proprietary front hub motor featuring traction control and is encased in a magnesium rim. The motor’s power is listed as “250/500 watt”. Many companies offer multiple motor options to meet street legal regulations in different countries, although in practice this often amounts to swapping a 500 W sticker for a 250 W sticker. So I wouldn’t be surprised if the EU model feels a bit peppier than a true 250 W.

Other nice touches include a Shimano Nexus 3 speed internal hub and hydraulic brakes in the front and rear.

The front single-sided fork and rear single-sided swingarm combine a fancy design with functional suspension to smooth out city bumps.

An LED light bar on the handlebars provides a rough gauge of battery, while the smartphone app can give riders a more exact reading. I’m a bit surprised Gocycle didn’t go with a full display, though the handlebar LEDs are definitely better for a small folder and leave one less thing to snag on the handlebars.

But for those who like the fast-folding design and enjoy the benefits of maintenance free components like the hydraulic brakes, internally geared hub and spoke-less magnesium wheels, then this could be the folding e-bike for you.

What do you think of the Gocycle GX? Let us know in the comments below.