Untitled Motorcycles, a custom motorcycle design shop, is showing off its custom redesigned Zero SR/F electric motorcycle. The bike takes a sharp turn from the standard SR/F streetfighter appearance, and yet is still recognizable as the SR/F that gave it life.

While Zero Motorcycles has made a lot of progress on the electric motorcycle design front, they have shied away from extreme designs.

When building a bike meant for wide market appeal, it’s hard to get too wild with the aesthetics. But fortunately for those that want to see a little more creativity in their electric motorcycle designs, Untitled Motorcycles stepped up to the plate and went to work on a new Zero SR/F.

Hugo Eccles from Untitled described his work on the Zero SR/F as trying to feature the powertrain prominently instead of hiding it, according to MCN:

This isn’t about novelty for novelty’s sake, or some nostalgic idea of the future. The goal is to celebrate this unique riding experience through an entirely new function-led aesthetic. If the Zero XP looks futuristic, it’s because electric motorcycles like the SR/F are the future. From the outset I knew that I didn’t want to hide the powertrain behind a fairing. I wanted to unapologetically celebrate the character of this motorcycle.

The body panels are CNC’d polymers with frosted polycarbonate edges, and the custom seat has been upgraded to suede upholstery. The seat shell, front end, and skid plate are all CNC’d aluminum components, as are the front suspension brackets. The display is an old-fashioned-looking dot matrix screen housed in the diminutive CNC aluminum instrument panel.

And to finish it all off, Untitled used aerospace “Ghost Grey” experimental aircraft paint, which gives it that muted yet eye-catching look.

Untitled gave the Zero XP new custom LED lighting, including extra LED lights on small winglets. The powertrain remains the same, offering around 80 kW (107 hp) from the ZForce 75-10 motor. That motor was recently developed by Zero specifically for the SR/F.  It helps the streetfighter put out 190 Nm (140 lb-ft) of torque, which is transferred via a Gates Carbon Belt Drive that was recently validated when a slightly modified Zero SR/F tackled the Pikes Peak hill climb race.

The ZForce 75-10 motor is coaxially mounted, meaning it shares the same axle as the rear swingarm. That helps reduce complexity and maintain proper belt tension. 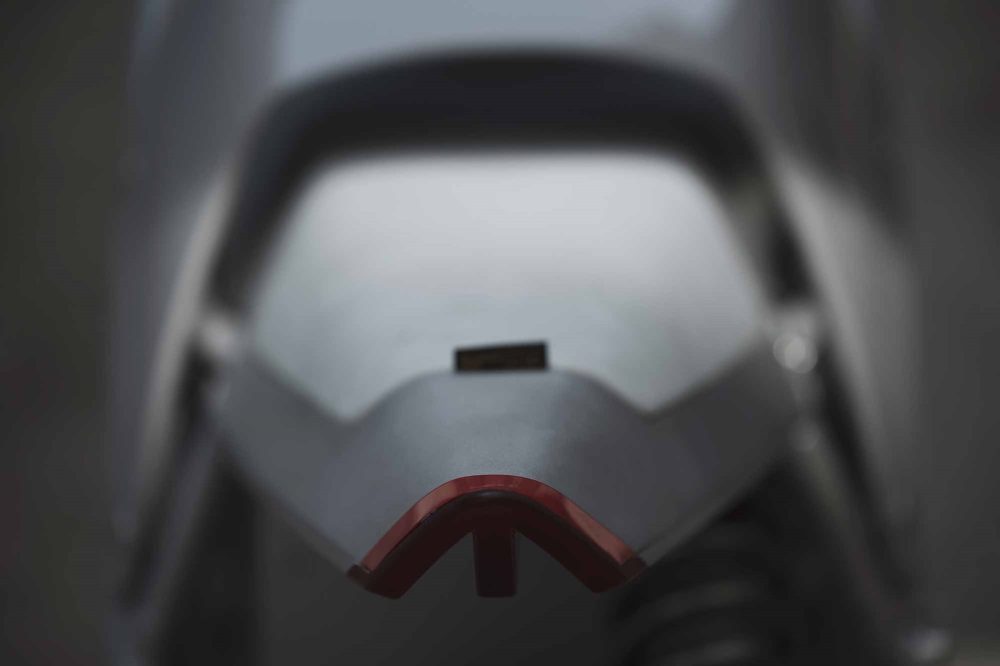 While the original Zero SR/F is a pretty impressive electric motorcycle in its own right, Untitled’s Zero XP certainly pushes the design even further into the future. What do you think of the end result? Let us know in the comments below!