Jaguar has been targeting Tesla owners with mailer adverts in which the automaker makes a bold comparison between the I-Pace and the Tesla Model X.

The vehicle has found some success in a few European markets, but sales have been extremely slow in the US despite offering 0% financing to boost sales.

Jaguar is delivering only about 200 I-Paces per month in the country.

Now several Tesla owners have reported receiving advertising brochures for the I-Pace in the mail.

In the brochure, Jaguar compares the I-Pace favorably to the Tesla Model X (Image by trinitesla on Reddit): 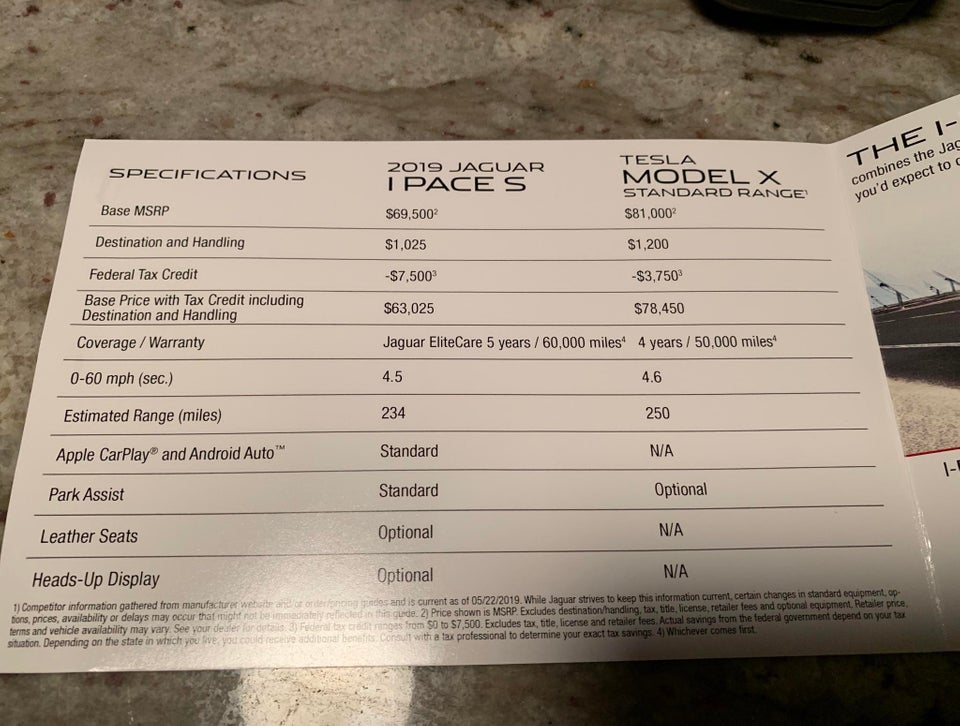 It’s not the first time that Jaguar has been trying to favorably compare its electric vehicle to the Model X.

When first launching the vehicle last year, Jaguar released a drag race video of the I-Pace with a now discontinued version of the Tesla Model X.

Let me start by saying that I like the I-Pace.

In my review of the Jaguar I-Pace earlier this year, I noted that it is a stunning electric vehicle and a good first entry in the electric space for the automaker despite several issues.

However, I have a problem with how Jaguar has been claiming that it is an SUV and it compares to the Model X.

Tesla’s Model X is a real full-size SUV that is much bigger than the I-Pace and holds a lot more cargo space, which is one of the most important features of an SUV versus a sedan.

I don’t know why Jaguar keeps insisting to compare it the Model X. I think they are doing themselves a disservice when doing that.

That comparison chart is simply misleading.

Forget that they shouldn’t compare them in the first place, Jaguar says that the Model X Standard Range gets 250 miles on a single charge.

It’s not clear where they took that number, but the Model X Standard Range has an EPA estimated range of 255 miles.

Also, they conveniently left out things like fast-charging capacity, driver assist features, and cargo space in their comparison points.

Jaguar has a stunning vehicle on its hands that happens to be electric. That doesn’t mean that they should pin it against any electric vehicle out there.

I think they should focus on making its own space in the EV market because if they are banking on stealing market shares from Tesla, they are going to have a tough time.