We got a Jaguar I-Pace for a few days last week and we were able to take the electric vehicle on a decent road trip in California. Last year we took it on a drive through Portugal but that was a heavily regulated and scripted ride by Jaguar. How does the I-Pace work in a real world, unscripted use case?

Here I give my thoughts on the I-Pace, which I think is a stunning electric vehicle and a first great EV for Jaguar, but it has some issues.

Let’s start with the design and form factor of the I-Pace, which is interesting for different reasons.

First of all, it’s a beautiful vehicle. Absolutely stunning. The design was growing on me over the few days I was driving the car and I never had so many strangers complimenting me for a car before.

When on our road trip, we even had someone flagging us down in traffic to tell us how beautiful it was.

Jaguar didn’t fall for the same traps that many established automakers have fallen into when making their first electric vehicles.

They didn’t make feel the need to include some “electric design accents” and instead focused on making a great looking car that just happens to be electric.

Here’s the full video review of the Jaguar I-Pace from our Youtube channel:

Why the Jaguar I-Pace is not really an SUV

As for the form factor, Jaguar is calling it an SUV, but I can’t really get on board with that. The only way this car looks and drove like an SUV is when you put the suspension on the “off-road” setting and that’s not something you should do most of the time: 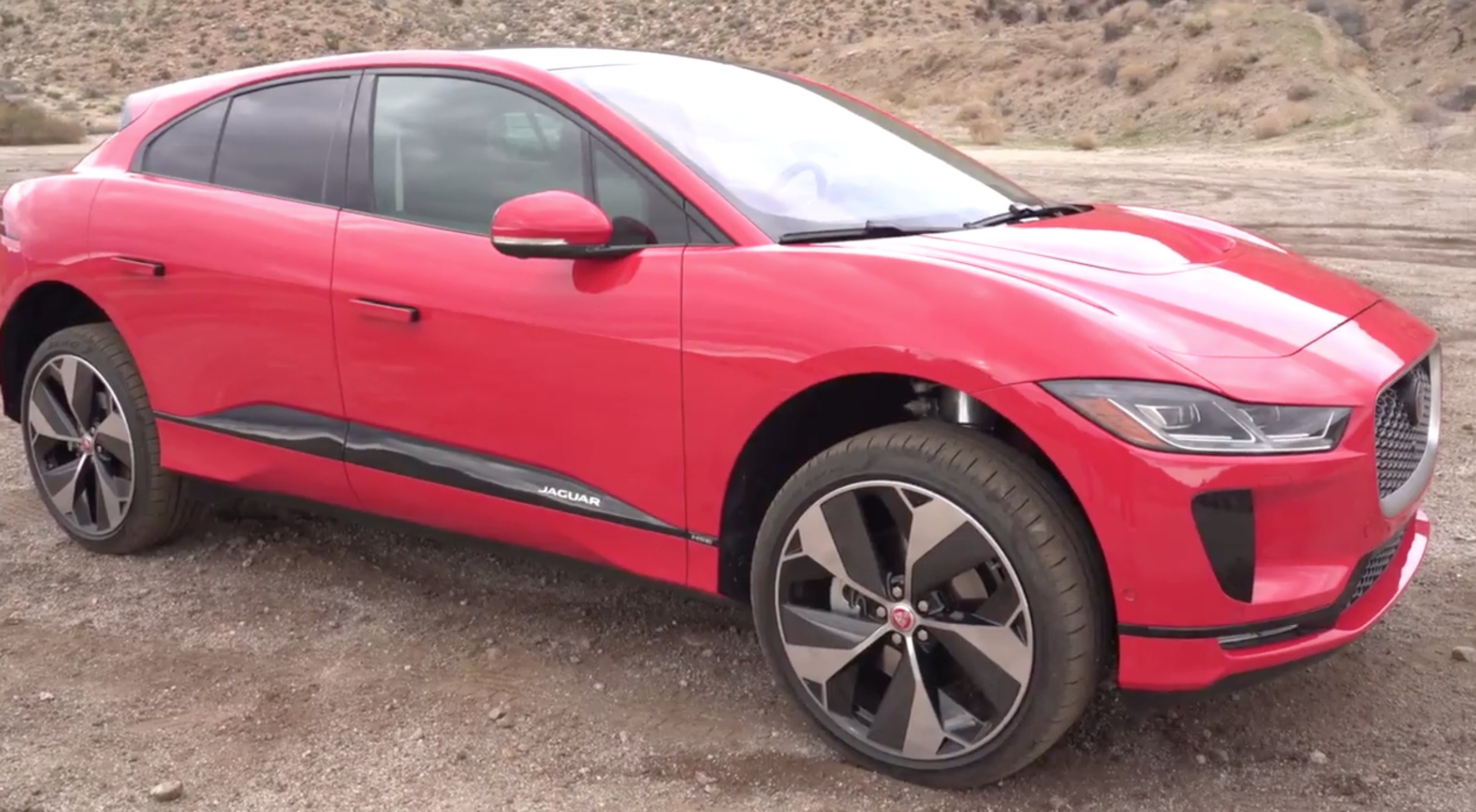 When the suspension is on “normal”, the car looks a lot more like a sedan or a wagon but not exactly. It makes for quite a unique crossover CUV in my opinion.

The design is not the only thing that differentiates the I-Pace from an SUV.

When you are driving, it certainly feels more like a sedan than an SUV since you don’t really have that height advantage over other cars on the road. But that’s not a bad thing at all.

Also, the cargo space, which is 25.3 cubic feet in the trunk and 51 cubic feet with the rear seat down, is only what you would expect in a compact SUV or even sedans. There are sedans, like the Tesla Model S, with more cargo space than that.

In short, it doesn’t have most of the things you would expect from an SUV today, but to be fair, it does have the “sports” aspect of an SUV…in spades.

That’s where the I-Pace shines the brightest. It’s a fun car to drive. So. much. fun.

With their first EV, Jaguar managed to take advantage of the instant torque of the electric powertrain and it delivers on an exciting pedal response.

The handling is strong and helped by the lower center of gravity thanks to the battery pack – the vehicle hugs the road.

I also liked the steering responsiveness.

On the highway, the driving is comfortable and … boring, as it should be in a luxury vehicle.

As for the driver assist features, I wasn’t impressed. I had to correct the steering system regularly and sometimes it would stop working without warning other than the wheel render going gray.

Jaguar has some work to do here.

Officially, the EPA is listing the range of the I-Pace at 234 miles on a single charge.

We took the car on a road trip to Anza-Borrego desert state park in order to test the range and the charging experience.

According to Google, it was a 170-mile trip one way, which makes it about 340 miles for the total trip.

Before leaving, the user interface of the I-Pace was showing between 275 and 280 miles of range depending on the driving mode: 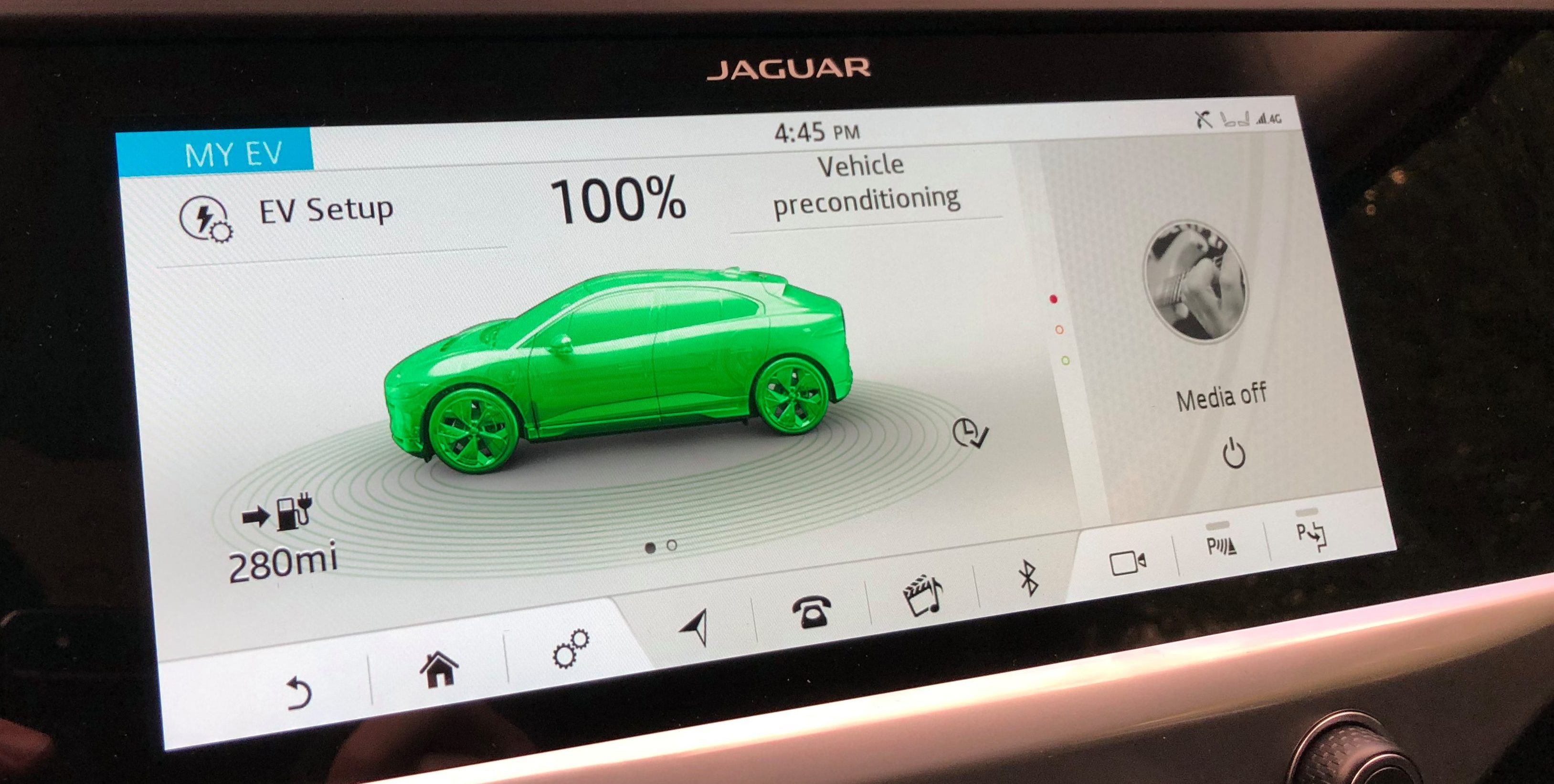 It seemed excessive to me and sure enough, we couldn’t get even close to that mark and I don’t think anyone could without using some hypermiling techniques.

The good news is that you can somewhat easily get over 200 miles of range out of the I-Pace with normal driving, which is going to be good enough for most people.

That said, energy consumption was high in my experience. That might have been a bunch of factors including the tires we had.

We were driving in perfect conditions and weather and we got about 400 Wh per mile, which would translate to 224 miles of range based on 90 kWh capacity of the battery pack: 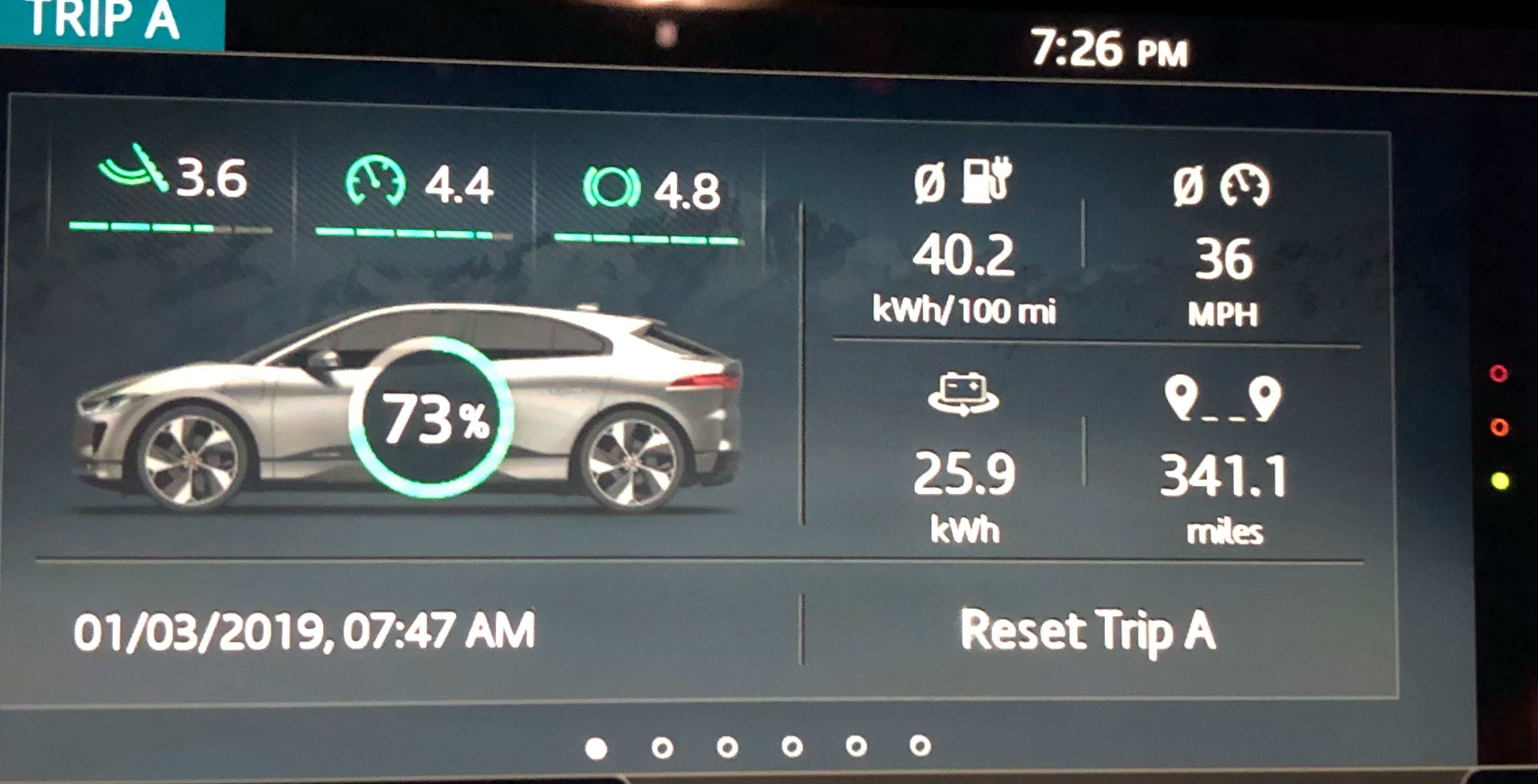 Jaguar’s system gave us some good scores on speed and climate, but it seemed to not like our acceleration even though we only did one full 0-60 mph launch and a few normal rapid accelerations in normal driving situations.

If you add some AC or heating, that would also affect the range.

On our way there and back, we ended up stopping at a EVgo station outside of Temecula, which is about half way: 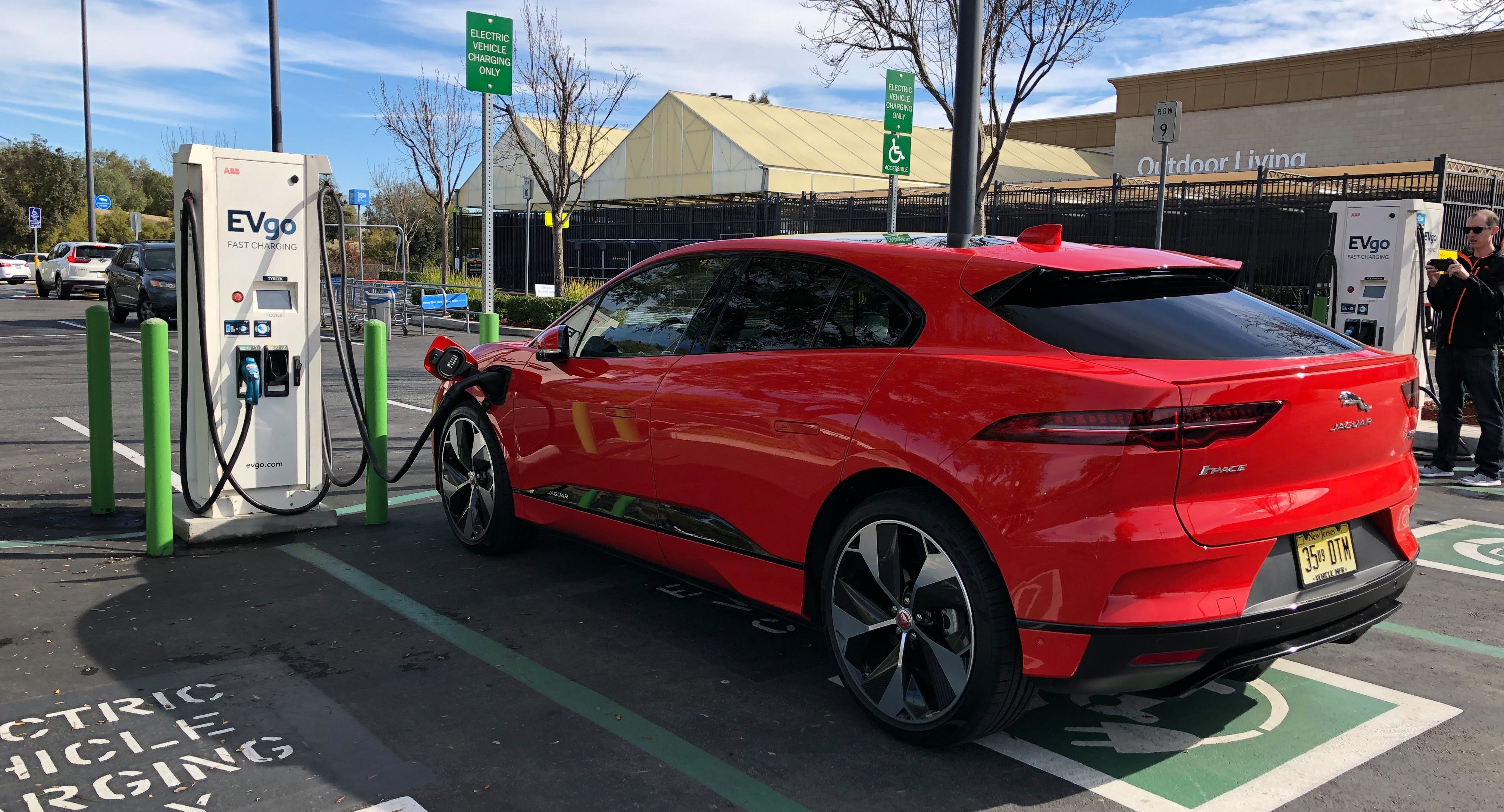 Jaguar claims that the I-Pace can take “up to a 100 kW DC charge rate”, but we couldn’t test that at the station.

The vast majority of EVgo station are currently limited to 50 kW. We tried to charge at an Electrify America station just to test it, but it turned out that it was also limited to 50 kW and none of the chargers would even work with the I-Pace.

First time using an @ElectrifyAm station. I thought I could use the full 100kW fast-charging capacity of the @Jaguar I-Pace, but all chargers were capped at 50kW. On top of it, nonE of the CCS chargers actually worked with the I-Pace, a CCS compatible car. pic.twitter.com/LCIfkaYjC4

At the EVgo charging station, the experience was fairly smooth and it worked well for our road trip.

Even though the charge rate is slow for a “fast-charging” station, we needed to stop to eat anyway and the charge state was where we wanted it to be by the time we were done.

We made it to Anza-Borrego without much range anxiety:

That said, it would have been hard to put many more miles on the car than that in a single day without much better charging architecture and we are talking about California, which has the most extensive charging infrastructure in the US.

Aside from the limited charge rate, the worst thing about the I-Pace charging experience is that it appears you can’t get in and out of the vehicle without stopping the charging session.

The car seems to go into some kind of charging mode and getting inside and starting it, which you would do to plan your route while charging for example, appears to stop that charging mode. It’s annoying.

As for home charging, the I-Pace is equipped with a 7.2kW single-phase AC on-board charger for overnight charging, which would be the main way most owners will charge the car.

That was the biggest downside of my entire experience with the I-Pace. The user interface is unintuitive and it had several bugs.

Jaguar’s navigation system wasn’t great so we wanted to use Apple Carplay, but it wouldn’t work.

Apple Carplay would stop working after 30 seconds or so and the iPhone wasn’t the problem because we tried two different ones and the problem persisted.

Some apps simply wouldn’t launch when we clicked on them and the center touchscreen would be very sluggish at times.

The climate control interface was well designed and worked fine, but everything else was difficult to use and that’s if it even worked.

There’s a lot to like about the I-Pace. I think it’s one of the best-looking vehicle out there period. It is super fast and responsive and handles like a dream.

The range is going to be good enough for most people, especially if you plan to use it to get around a city, but I think it would be hard to take the vehicle on a road trip that requires more than two full charges at least until the non-Tesla charging infrastructure with over 100 kW of capacity becomes more extensive.

It’s starting to be the case in Europe but less so in the US, and I think that will be reflected in the sales of the I-Pace – though the US could eventually catch up with a few new networks coming up.

I think the I-Pace would make a great family vehicle as long as you are not expecting the space of a full-size SUV.

But that’s all if Jaguar can fix its user interface, which was a real pain to deal with, and hopefully, they can use the vehicle’s over-the-air software capability to fix some of that.

The Jaguar I-Pace is an electric SUV produced by…