After success with $2,495 electric motorcycle, CSC is back with 43 mph electric scooter

Electric scooters for one or two passengers are part of the quickly growing personal electric vehicle market. While they’ve been a hit in Europe and Asia for years, they are only now beginning to come into their own in the US. There aren’t too many options for Americans to choose from yet though, but CSC Motorcycles in Azusa, California is working to change that. Their new electric scooter known as The Wiz is one of the fastest and longest range options available.

We initially reported on the City Slicker and then got a chance to try one for ourselves — ultimately giving it two thumbs up after its upgraded controller turned it into a sporty little crotch rocket.

The light electric motorcycle looks something like an electric Honda Grom. It hits a top speed of around 46 mph (74 km/h) and has a range of between 30-45 miles (48-72 km), depending how hard you ride it.

While some people consider the City Slicker to fit more into the scooter class due to its lower top speed, it definitely looks, rides and feels more like a motorcycle.

The City Slicker is a lot of fun to ride, but it doesn’t have quite the same utility as the classic step through scooter design – namely the comfort and storage options that such a design provides. That’s part of the reason CSC has decided to offer an electric scooter based on a similar design.

The Wiz electric scooter shares a similar battery to the City Slicker, though bumps the capacity up a tad from 1.8 kWh to 2.1 kWh. The battery can either be charged directly on the scooter or removed for charging indoors and should be good for somewhere between 33-48 miles (53-77 km). The scooter weighs just 201 lb (91 kg) but has a carrying capacity of 342 lb (155 kg). 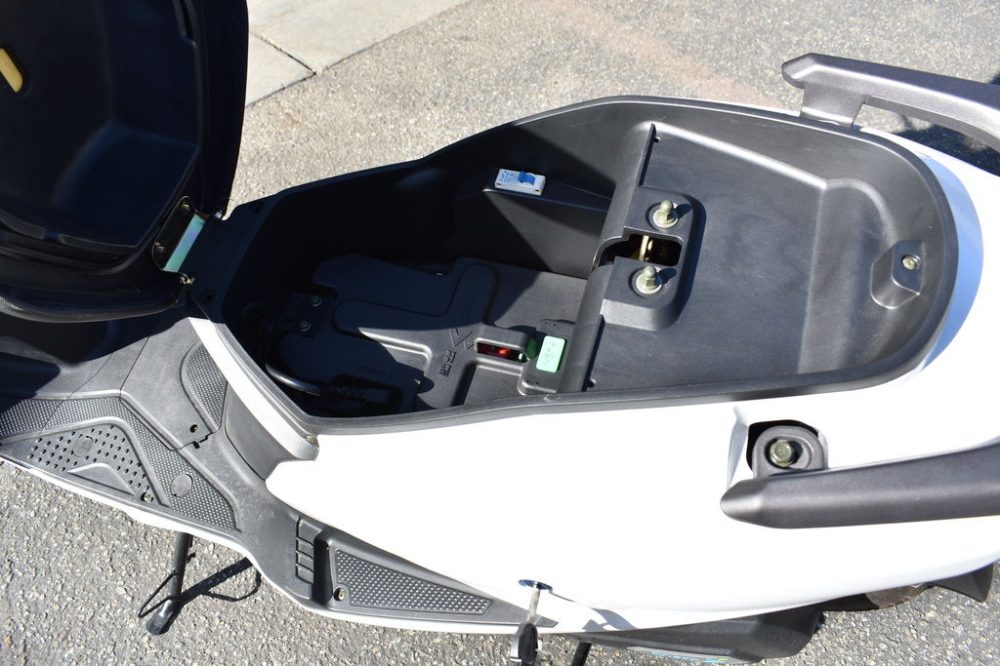 Both the City Slicker and The Wiz share a 3 kW motor, but The Wiz uses a rear hub motor instead of a mid drive. The Wiz also has underseat storage and a rear cargo trunk that is included for free, plus seating for two.

And while this isn’t recommended, another great cargo feature inherent to scooters is the ability to put large and bulky items on the floorboard. I’ve actually carried electric (kick) scooters and electric unicycles there are my own electric scooter before. Nothing like one EV being used to transport another!

That added utility is a big reason why many riders choose an electric scooter over a light electric motorcycle. As Steve Seidner, Owner of CSC Motorcycles, explained to Electrek:

“A lot of younger guys seem to prefer the City Slicker, while The Wiz is more popular with people that want to carry more things or want a more relaxed ride. It’s still quite peppy, especially for a scooter, but it’s just so easy to ride that it’s really appealing to people.”

At a price of just $2,495, it’s certainly affordable as well, at least for an electric scooter. While cheap 50cc gas scooters can be had for cheaper, The Wiz is silent and clean. And with no stop offs at gas stations, it is cheaper to ride as well.

I recently calculated how much I’ve spent on energy for my own electric scooter. I’ve got almost 700 miles on the odometer and that has cost me approximately $4.10 worth of electricity. That’s not bad in my opinion, 700 miles for less than the cost of a gallon and a half of gas.

And while CSC isn’t getting rid of their gas-powered motorcycles yet, the company seems pretty committed to integrating EVs into their lineup. After all, this is their second electric two-wheeler in as many years. As Steve tells it:

“Gas bikes are still the main part of our business but we have seen how much interest has grown in electric motorcycles and scooters over the last few years. It seems like most are so gosh darn expensive though, so we wanted to use our consumer direct business model to offer an electric scooter and motorcycle at an affordable price.”

Is The Wiz the fastest electric scooter in the US?

As I mentioned, the US doesn’t exactly have a huge crop of electric scooters to choose from. And those that exist aren’t speedsters either.

We recently reviewed the Bloom Scooter, whose 25 mph top speed definitely classified it as an urban scooter.

Electrek has been long term testing a GenZe 2.0 electric scooter, which works great. But with a top speed of 30 mph, it can leave you wishing for more when you hit larger urban roads.

Flux Mopeds in Wisconsin offers a 37 mph model, though the lead time on orders is somewhere around 2 months at best.

But at 43.5 mph, CSC’s The Wiz might just be the fastest electric scooter in the US. Or at least it will be when it is in stock in July. In the mean time, customers can put down a $500 deposit to have one of the first CSC electric scooters delivered.

Make sure to let us know what you think of the Wiz in the comments section below. And check out our review of CSC’s other EV, the City Slicker electric motorcycle, in the video below.