Electric mopeds use is booming around the world; here are the options available in the USA

Cruising down the road with the wind in your face, the throttle in your hand, and… a couple bags of groceries at your feet? Alright, electric mopeds and scooters aren’t sexy, but they sure are useful – especially in cities and suburbs.

Electric scooters are great for zipping around town and helping make the journey more exciting than most cars. If you only need to carry one or two people and a couple armful of stuff, an electric scooter could be a smart choice. They are zippy, can weave past traffic (where legally allowed, of course) and make finding parking a breeze. Plus they can often park for free in many cities!

In the US, electric mopeds and scooters that top out at 30 mph usually don’t require a motorcycle license, meaning you can ride them with just your normal driver’s license, and registration and insurance is much cheaper. Sure, 30 mph doesn’t sound very fast, and you won’t be taking any highways, but I’d rather be cruising at 30 mph on my scooter than sitting in stop and go traffic in a car. Plus, some scooters are “30 mph rated”, wink wink. When it comes to electric scooters, usually the rest of the world gets all the fun. India has the Ather 340 and 450 as well as the Flow electric scooter. Taiwan has their awesome new battery-swapping Gogoro electric scooters. Italy is still working on the electric Vespa, expected to be ready in the next 6 months if they stay on schedule. Heck, even Luxembourg is on board with their own domestic UJET electric scooter.

So what are we Americans supposed to do if we want to get in on the scooting action? Don’t worry, there are actually several local options to get your electric scooter fix.

The GenZe 2.0 scooter is probably one of the most polished electric scooters currently available in the US. It was designed by Mahindra, one of India’s largest automotive companies, and is manufactured in Detroit, Michigan.

The design is quite unique, and has been described as “the pickup truck of electric scooters”. The rear cargo bed is open, allowing you to carry larger items than would normally fit in the enclosed under-seat storage on most scooters.

GenZe also sells a number of accessories for the cargo bed that add more functionality, including a model that turns the cargo bed into a taller enclosed cargo box, which they market towards city couriers.

The GenZe 2.0 includes a laundry list of useful features as well, including a large touch screen, smartphone connectivity, and a removable 1.6 kWh battery – important for charging when you don’t have your own garage for charging. Plus, the GenZe 2.0 has a number of anti-theft features, including alerting you if your scooter is moved and allowing you to track it if the scooter is stolen, all thanks to its built-in GPS connectivity.

The GenZe 2.0 has two different models available, and starts at $3,699. It has proven to be popular enough that two separate electric scooter rental companies in the US, San Francisco based Scoot and Pittsburgh-based Scoobi, have chosen it for the fleets of electric scooters.

The Volta and Volta FRE are both Asian-imported models offered by Baltimore-based WeRide. They are Vespa-inspired scooters that have that 1960’s feel written all over them. What they lack in top speed, they make up for in charm.

These are definitely lower speed vehicles, with the Volta rated for 25 mph with its 2,000 watt motor. It has a range of 40 miles at 25 mph, but uses a 1.4 kWh lead acid battery setup, meaning you really shouldn’t ever discharge it more than 50% if you want to get decent life out of your battery pack.

The Volta FRE has an upgraded 960 Wh Li-ion battery pack which should last much longer, but has a slower top speed of just 20 mph with its 800 watt motor, and a more limited range of 25 miles.

Neither of these are a speed demon, but at least they’re affordable. Both models are priced at $1,799. 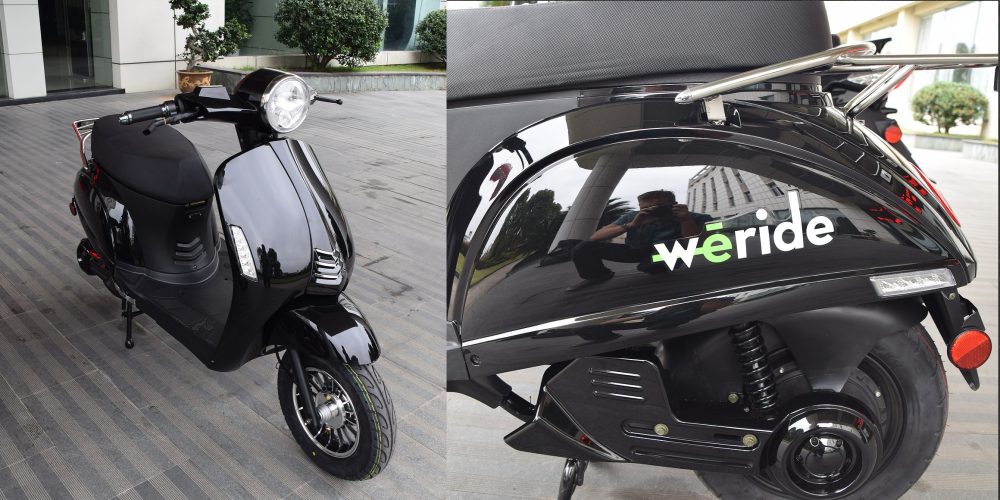 If you’re looking for an affordable electric scooter with a little more pep than the Volta, WeRide has another option for you. The Benjamin, named after Benjamin Franklin for some reason (I’m not kidding!), eschews the cute little retro European styling for a larger, Asian styled moped.

The Benjamin has a higher top speed of 30 mph and a better range of 30 miles.

The downside is that the Benjamin, just like the Volta, is packing a 1.4 kWh lead acid battery pack. It will definitely work and scoot you all over town, but lead acid batteries are notorious for quickly losing their capacity, especially if over-discharged. 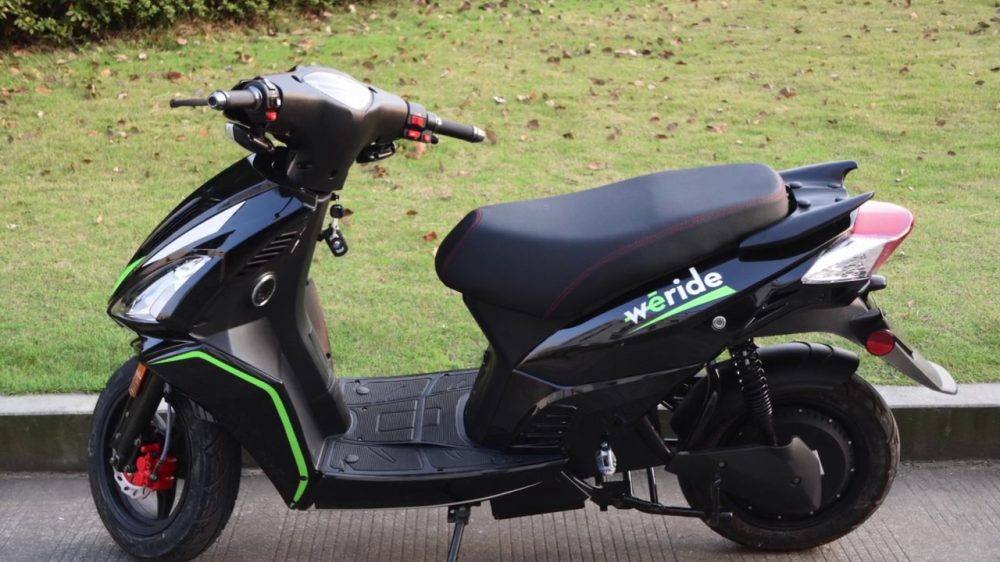 The Cirkit, offered with free shipping to the USA and Canada by Indiego Bikes, is a 1,000W electric scooter that has a design that feels like a mix between an Italian and a Chinese scooter.

The Cirkit has a top speed of 37 mph, so it might not fit into the lowest moped and scooter class laws depending on your state.

This electric scooter comes with a stated range of 43 miles, but its 72V battery is also a lead acid pack, so that range is somewhat relative.

The Cirkit is rather spartan when it comes to features, but it’s simplified design translates to the most affordable price on this list, just $1,210. For that price, you can swap out the lead acid battery for a 72V 20Ah lithium-ion battery ($650) and still keep the total price at under $2k. Actually, I’m really tempted to do that now… 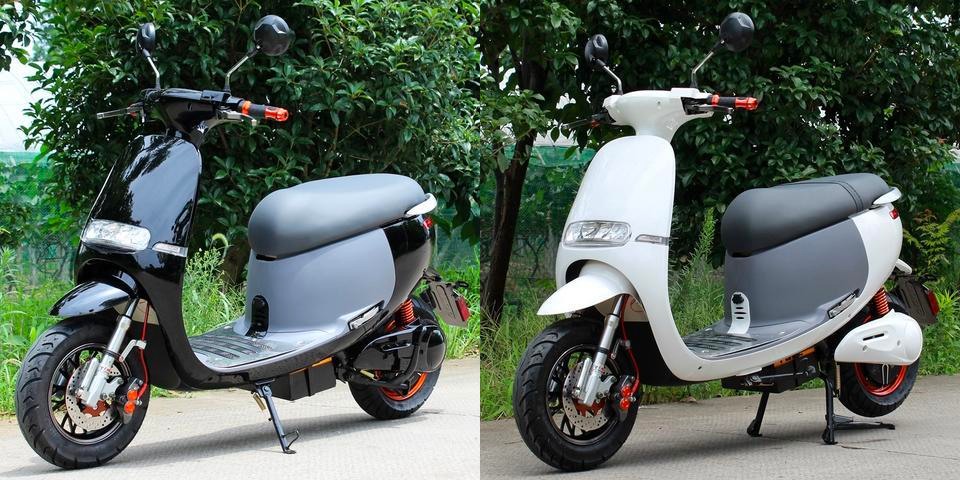 I saved the best for last. We covered San Francisco-based ONYX’s new CTY and RCR last week, and they both definitely belong on this list. Both models have a bold, industrial design that is reminiscent of mopeds from the 1970’s and 80’s.

The CTY is the tamer of the two, with a 2.5 kW motor rocketing it to 30 mph and a 48V, 768 Wh battery that can provide 25-40 miles of range depending on how hard you’re riding. Onyx also overs a second battery to double your range as well.

Interestingly, both models sport functional pedals so you can actually use them like a bicycle, but don’t expect to be able to keep up with the motor at 30-60 mph. 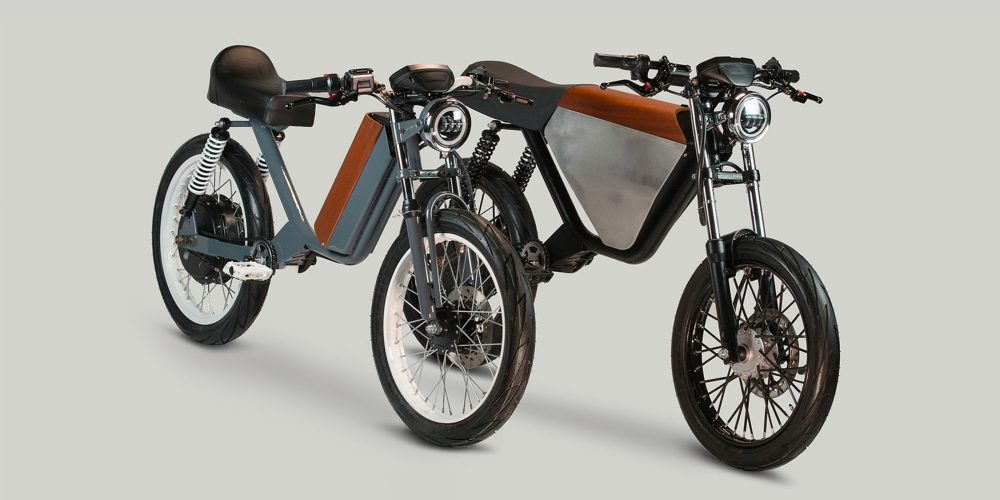 So what do you think? Could an electric moped or scooter be in your future? Let us know in the comments below.