Could these cute little electric quadricycles be the next big e-cargo bike solution?

Light electric vehicles are increasingly falling into favor for use in cargo and delivery applications. Now a new company from the UK has unveiled their own solution: electric quadricycles.

The new company, Electric Assisted Vehicles Limited (EAV), made the announcement today at the eBike Summit currently underway in Oxford.

EAV’s new vehicles are known as the Project 1 eCargo bicycle, or the “P1” for short.

The P1 is an electric quadricycle designed for carrying cargo. The designation “quadricycle” is an EU vehicle classification that includes microcars and other small four-wheeled vehicles.

The operator of a P1 rides and steers it like a conventional bicycle. The electric pedal assist helps multiply the rider’s pedal input to provide more propulsion power. There is also a thumb throttle that can power the P1 up to 10 km/h (6 mph) without any pedaling input. That mode is likely helpful in warehouses or narrow alleyways where the operator is more focused on maneuvering the vehicle than covering greater distances.

The P1 can carry up to 150 kg (330 lb) of cargo in its enclosed rear pod. The pod extends to cover the rider’s cabin as well, offering protection from rain and inclement weather. The sides are open, though flexible vinyl doors could presumably be added to make winter riding a bit more comfortable. 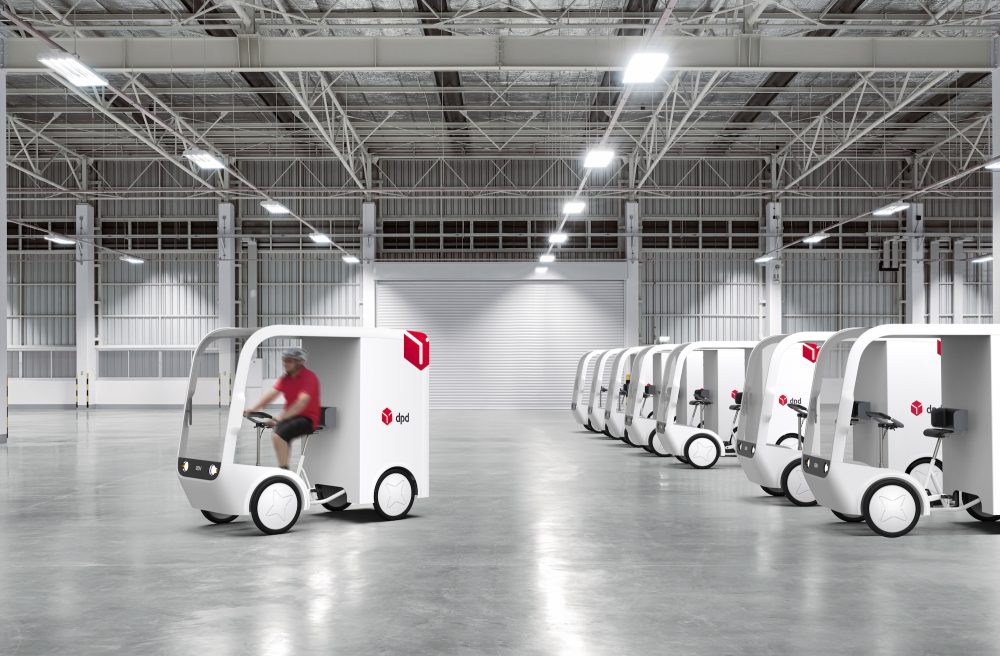 EAV’s team consists mostly of members from the automotive, motorsports and aerospace industries. Instead of trying engineer-up a standard bicycle into a light EV delivery machine, the team started with cargo truck designs that they could engineer-down into the resulting P1 quadricycle.

According to EAV, that has helped keep the P1 optimized for cargo and deliveries:

“In doing so, operators of the P1 will still find many of the elements of using a van they’re used to but with the immense efficiencies and zero emissions of the eCargo bike.”

The P1 is narrow enough to use in cycling paths, though the reaction of cyclists to seeing a mini box truck in their lane remains to be seen. 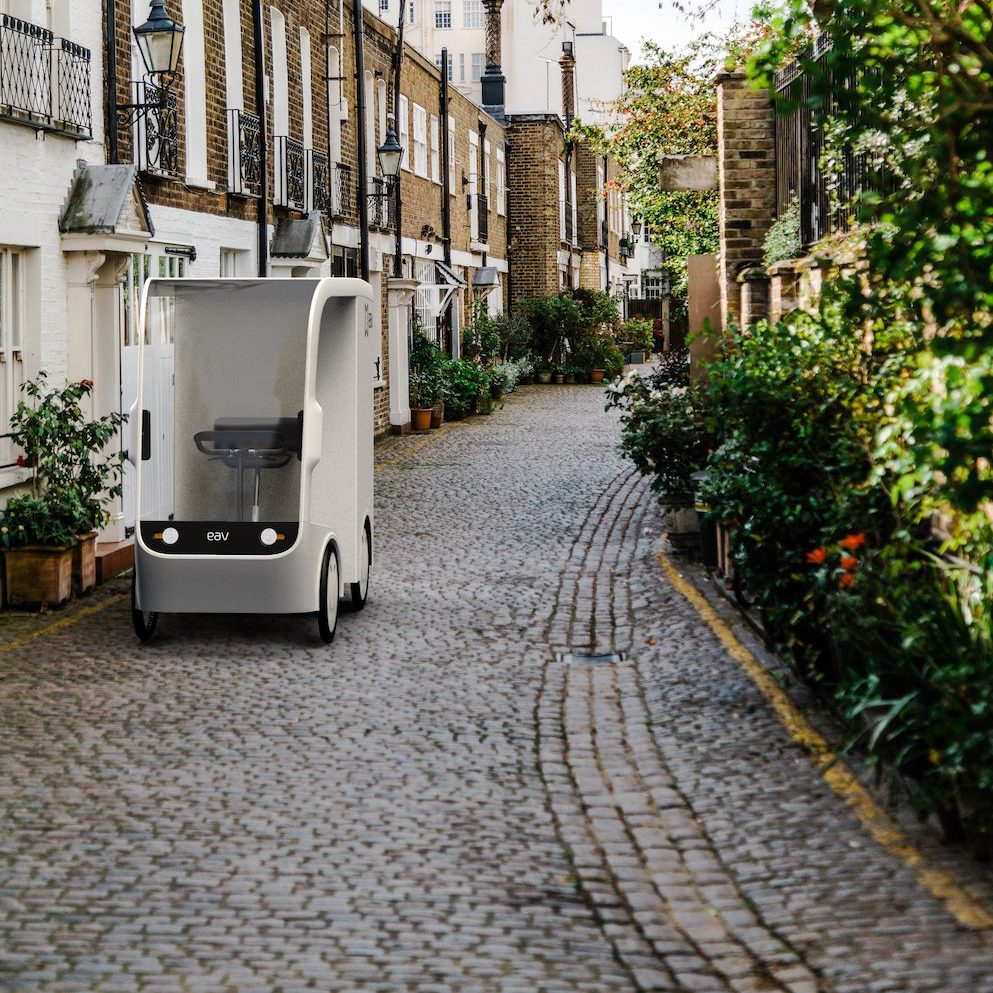 According to Nigel Gordon-Stewart, Managing Director of EAV:

“We’ve created a vehicle with Project 1 that will lead on to an entire range of mobility solution vehicles.  All highly functional, exceptionally environmentally aware, easy and great fun to use.  Also, they have to be very cool to look at which is another crucial cultural point.”

DPD launched the UK’s first all-electric parcel depot in Westminster this past October and has been working towards the introduction of further zero-emission vehicles in the UK.

According to DPD CEO Dwain McDonal:

“EAV is an incredibly innovative company and it has been fantastic to work alongside a British manufacturer to create such a highly customisable solution. Our aim is to be the most responsible city centre delivery company, which means neutralising our carbon footprint and developing smarter, cleaner and more sustainable parcel delivery services. Not only does the P1 look amazing, it is also incredibly smart, flexible and future-proofed. As a result, the P1 is perfect for UK city centres and we are really looking forward to adding it to our rapidly expanding zero emission fleet in July.” 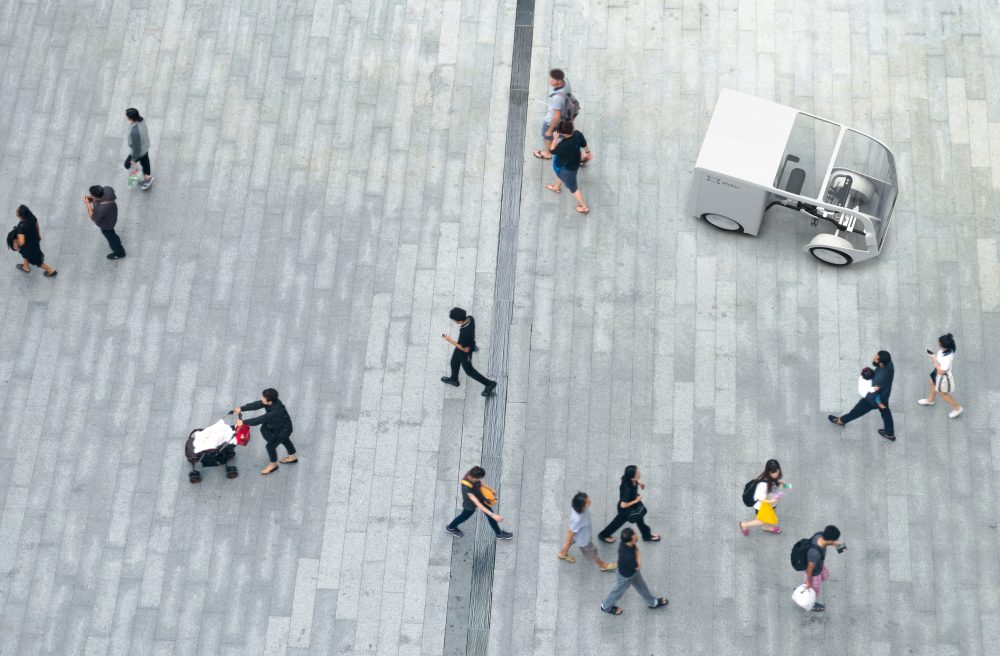 EAV is also considering additional business models for the P1, including renting it out to private couriers and other delivery riders. Such models are already becoming popular with other EV delivery companies like Deliveroo.

With the Ultra Low Emission Zone recently instated in central London, vehicles like the P1 could be an important part of maintaining delivery capacity with EVs in the city.

According to Adam Barmby, founder and technical director at EAV:

“We would like to re-educate the population on common sense vehicle design and intelligent methods of mobility that deliver a sense of purpose and place for urban populations. We’re already thinking on how we can extend the technology for other uses. For example, the chassis design is modular, so we can extend, widen, or shorten the P1 for multiple applications. Full weather protection is also in development for year-round use in almost any climate or city location worldwide.

Part of our business model is to make the P1 a rentable vehicle for the gig economy with an App operation for entrepreneurs so they can use it for their own businesses.  We’re also looking at the P1 concept’s ability to carry passengers and we’re keen to work with the Department for Transport and Transport for London in order to evolve the regulations for this zero emissions solution for future urban mobility”.

What do you think of the P1 electric quadricycle? Let us know in the comments below!