A global transition to affordable and sustainable energy “has stagnated, with little or no progress achieved in the past five years,” according to a new report from the World Economic Forum.

The nonprofit World Economic Forum released its latest edition of its Fostering Effective Energy Transition Report for 2019. While many countries are increasing their share of renewables, it’s not being done fast enough to meet the Paris Agreement goals, and some gains are being offset by stagnation in other areas.

A major part of the report is its Energy Transition Index (ETI), which assesses each economy’s energy “system performance.” The three main points of criteria in the index are: security and access, environmental sustainability and economic growth and development.

The forum notes the “average system performance score had been improving since 2014, but it stalled last year.” As a category, energy access and security has seen the most overall improvement, but affordability and sustainability aren’t measuring up:

“Continued use of coal for power generation in Asia, increasing commodity prices and slower than needed improvements in energy intensity have contributed to this year’s stagnation in performance.”

The report ranks all the countries based on their performance in the Energy Transition Index. Europe leads the way — the top 10 countries in ETI score are all European. 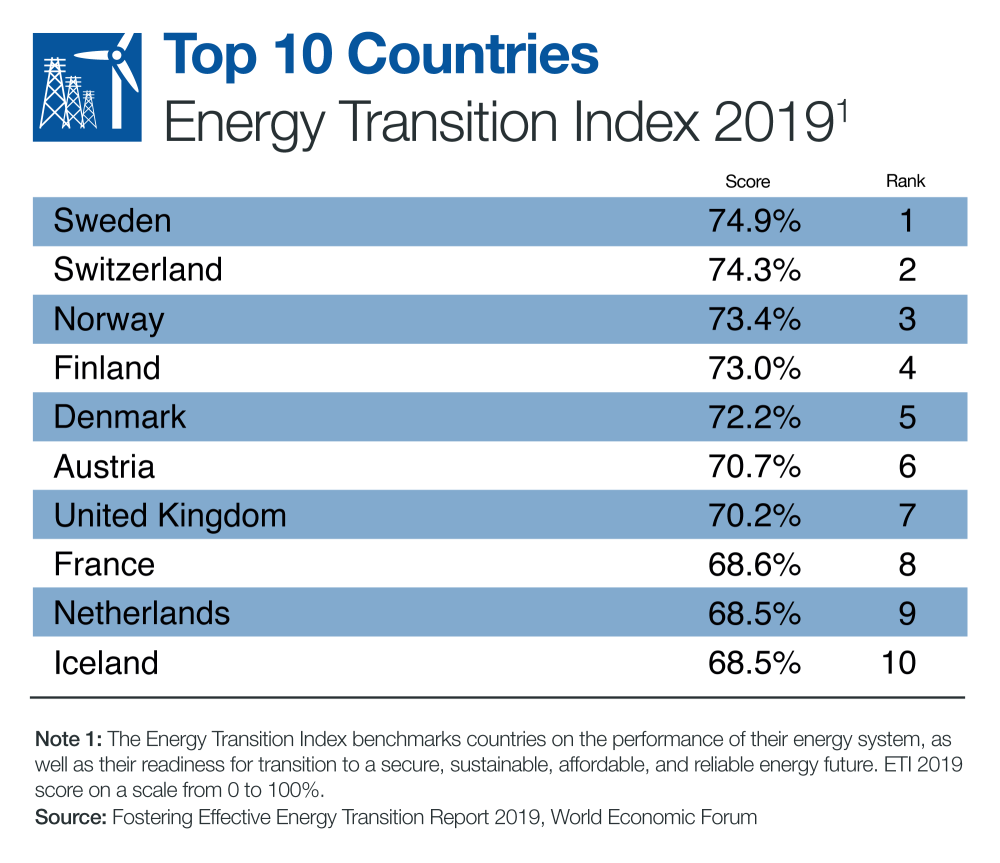 The U.S. comes in at 27th out of 115 countries on the 2019 ETI, with an overall score of 63 percent. The bottom five countries on the list are Haiti in last with a score of 36 percent, just behind South Africa, Zimbabwe, Venezuela, and Mozambique, which was recently ravaged by Cyclone Idai.

In conclusion, the report identifies a “need for speed in energy transition. Given the scale and complexity of the challenge and the urgency of collective action, it is not a trivial task.”

These sobering findings emphasize a vital need for large scale solutions in energy transition, and at a faster pace than some might believe to be possible. Some reports are already predicting a “locked in” temperature rise in parts of the globe. We need forward-thinking, actionable policies and we need them now.