Today in EGEB, NPR looks at “how we stopped” climate change from a 2050 point of view. Two firms are backing the plan to bring renewable energy from Iowa eastward via underground transmission line. More Chinese cities move from coal to gas or electric heating. And Democrats in Iowa show overwhelming support for the Green New Deal.

NPR‘s Morning Edition asked a number of people what the world might be like in 2050 if we’ve “stopped” climate change. In addition to the audio, an article discusses the possibility with an engineer, agriculture researcher, and city planner, among others.

Those interviewed offer different ideas of just what this future may look like. Some see electric cars with “electric highways.” Others see suburbs that look and feel more like cities, with as little personal car use as possible.

Some foresee the death of “entire industries” such as oil exploration and gas furnace manufacturing. But while some plants still burn coal or natural gas, “they also have to install massive plants to capture carbon dioxide from their smokestacks and put it back underground.”

Sally Benson, director of the Climate and Energy Project at Stanford, said the technical solutions already existed “back” in 2019. Navigating social disruption was the tough part. Benson said, “The transformations were so profound that it really needed to be a collective effort.”

Siemens AG and Danish investment fund Copenhagen Infrastructure Partners are purchasing the $2.5 billion SOO Green Renewable Rail project from its developers, the Wall Street Journal reports. Terms of the deal were not disclosed.

The partners will both build and operate the already planned electrical-transmission line. At 349 miles long, it will bring wind and solar energy from Iowa into the Chicago area. From there, it will hook up to the PJM Interconnection, bringing that energy into 13 different states in the Midwest and Mid-Atlantic, in addition to Washington DC. 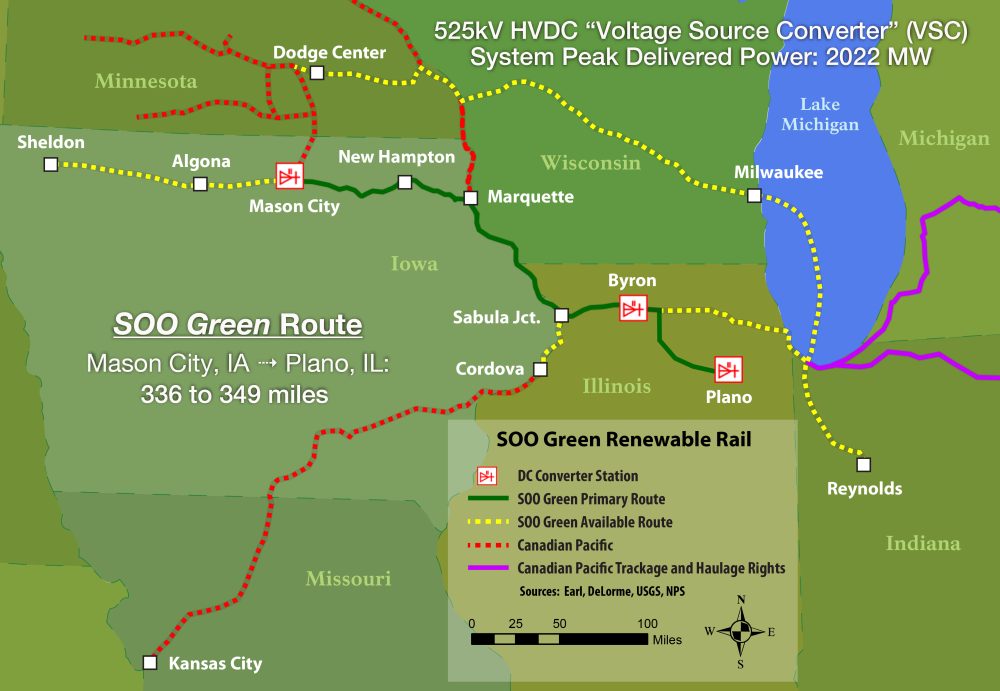 The project gets its name because most of the renewable rail will run underground along a Canadian Pacific railroad corridor. Developers believe this plan will simplify permitting and construction. The line will use direct-current technology, so as not to interfere with railroad signals.

Once complete, the line will be able to carry 2100 MW. The developers told the WSJ they aim for the line to be operational by 2024.

China expanded its coal-to-gas and coal-to-electricity projects from 12 to 35 cities in 2018, China’s environment minister Li Ganjie said. Though there were obstacles, 4.8 million households switched from coal to natural gas or electricity for heating last year, Reuters reports.

China previously burned an estimated 400 million tons of coal a year for its winter heating program. The country is making an effort to transition away from the fossil fuel. Despite the progress, Li isn’t entirely optimistic about the way forward:

“The things that could easily be done have already mostly been done, and the things that need to be done afterwards are much harder.”

As we’ve noted before, satellite data indicates Chinese emissions actually increased from 2010 to 2015, with the rise mostly attributable to coal mining.

In Iowa, an overwhelming 91 percent of 2020 Democratic caucusgoers say they “prefer a candidate who supports the Green New Deal,” according to a Des Moines Register/CNN/Mediacom Iowa poll.

Would-be Dem voters are largely split on the presidential candidates at this point, with Joe Biden and Bernie Sanders leading the pack. But there’s no denying where they stand on the Green New Deal.