With so many different electric scooters on the market, it can be difficult to stand out. That has led companies to get creative with the features they include in their scooters.

InMotion took that notion to heart with the design of their InMotion L8F electric scooter. In addition to the standard scooter features we all know and love, they included some fun and fascinating new features I haven’t seen in any other model.

InMotion is one of the most popular brands for personal electric vehicles.

From the innovative lighting and turn signals to the removable roller wheels and the unique drag handle, the InMotion L8F electric scooter definitely stands out among the throngs of other electric scooters. At $799, it comes in at a premium over the most budget-level $299 electric scooters we’ve seen, but the L8F offers many more features than those budget scooters.

As usual, let’s check out the tech specs first.

InMotion L8F – how does it ride?

The ride quality on the InMotion L8F electric scooter is quite good. The suspension up front makes up for the solid tire, while the lack of rear suspension isn’t an immediate deal breaker due to the pneumatic tire absorbing much of the road shock. This definitely isn’t a pot hole conquering machine though, you’ll still feel those.

The motor power is adequate, but no one is going to accuse it of being too powerful. For everyday commuting needs it felt just fine for me though. I don’t have very many hills in my area to test it on arduous climbs, but I expect that on steep hills you’ll feel a noticeable decrease in top speed. That’s to be expected from any 250 W electric scooter – they simply don’t have the power to maintain full speed on uphill climbs. 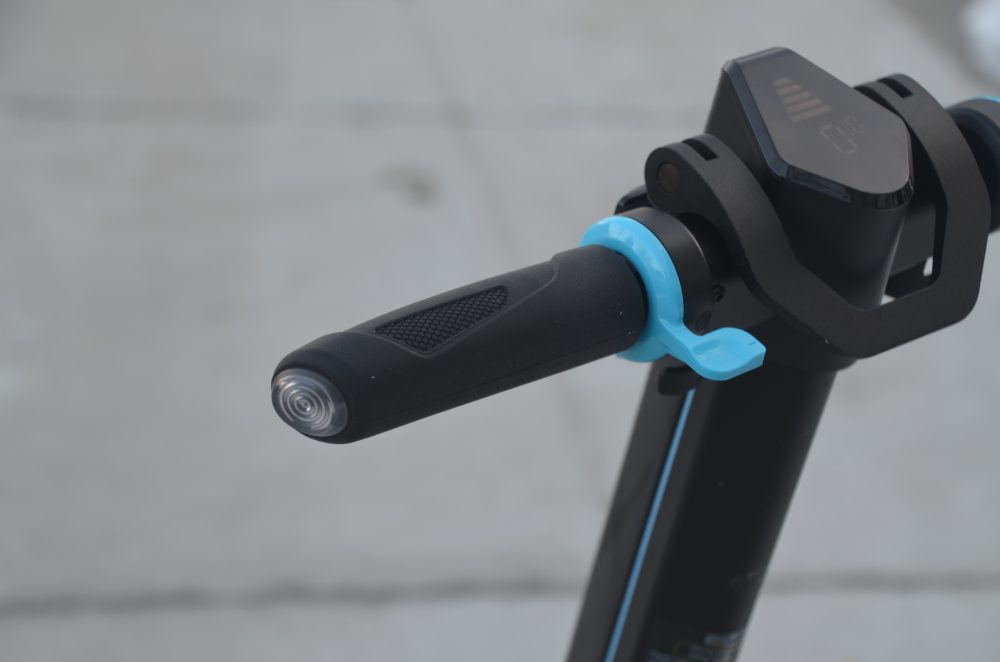 The handlebars are quite comfortable and the steering is responsive without being twitchy. The regenerative braking works pretty well for most normal stopping needs, but for emergency braking you’ll want to stomp on the foot brake.

The entire scooter feels very well put together. Some of these mid-range price electric scooters feel noticeably cheap, but the InMotion L8F both looks and feels like a high quality scooter.

All the other nice features

The best parts of the InMotion L8F scooter are probably all of the extra features.

Don’t get me wrong, the scooter itself is great. High quality, decently powerful, good range, etc. But there are a lot of scooters out there with similar speed and range specs. So in addition to the high quality construction, the following features are what make this scooter special.

First of all, the InMotion L8F has optional drag wheel add-ons. This is great for anyone who needs to carry the scooter for more than a few feet. At 26.5 lbs (12 kg) the scooter isn’t terribly heavy, but it isn’t light either. The optional wheels can be bolted right onto the floor board where they turn the scooter into something of a piece of rolling luggage.

There’s also a convenient pull handle at the top of the scooter (actually the handlebar lock that doubles as a pull handle). That makes it easy to wheel your scooter around.

Other scooters must be carried when they are in the folded position. You might be able to jury rig a way to keep one wheel on the ground, but they won’t be stable and won’t have a convenient pull handle like this scooter. So there’s a +1 for the InMotion L8.

Another nice touch is that when the pull handle is engaged, it unlocks and folds the handlebars. That means your scooter is only as wide as the floorboard when you’re pulling it around. No more catching the handlebars on door frames. 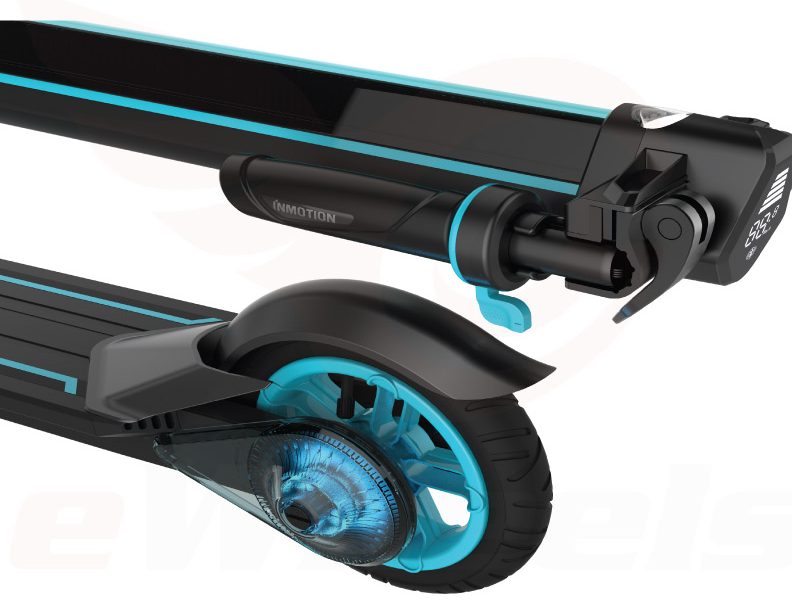 Next, check out all of these lights! There are lights on either side of the rear wheel, lights on the ends of the handlebars, a big light strip on the front of the scooter and a head light to boot!

Plus you can customize the color of the lights in the app. I like the blue color as it matches the other accents on the scooter, but you can go nuts with the colors.

The lights aren’t just for show either, they are quite functional. The rear lights turn red when you pull the brakes to indicate that you’re stopping.

The handlebar lights also double as blinkers. There’s some kind of sensor to determine when your fingers release the grip which causes the light to flash on and off. To be honest I can’t find the sensor and I don’t know how it works. I’m about 30% sure it’s magic.

You don’t have to take your hand all the way off the bar either, just relax your fingers and the light will pulse. So by pumping your fingers a few times, you can turn the handle bar lights into a blinker. That’s not something you’ll find on any other budget scooter!

I’ve been very happy with the InMotion L8F electric scooter. It’s solidly built and has plenty of range.

If I could make one change it would be to bump up the power a bit and give it cushier wheels, but I’m probably just greedy. For a high quality $799 scooter that includes a bunch of features not found on other scooters, I think InMotion has done a great job with this one. It is hard to include much more in the way of suspension or features without having to drastically increase the price.

What do you guys think? Let us know in the comments below!