40 years before the LiveWire, engineers built this electric Harley-Davidson

Harley-Davidson’s LiveWire electric motorcycle has been making waves ever since the production version was unveiled last November. Despite its high $29,799 price tag, Harley-Davidson deserves props for its early embrace of EVs, beating many other major motorcycle manufacturers to the market.

But would you believe that a group of engineers actually built the first electric Harley-Davidson over 40 years ago? Check out their impressive effort below.

Forwarding-thinking engineer Steve Fehr from the Transitron Electric Corporation had the big idea that Harley-Davidson should build an electric motorcycle. And to convince them that it was possible, he decided to build one first.

Steve got together with a team from Transitron and began designing the first ever electric Harley. Their original design sketches show how the team planned to do it. 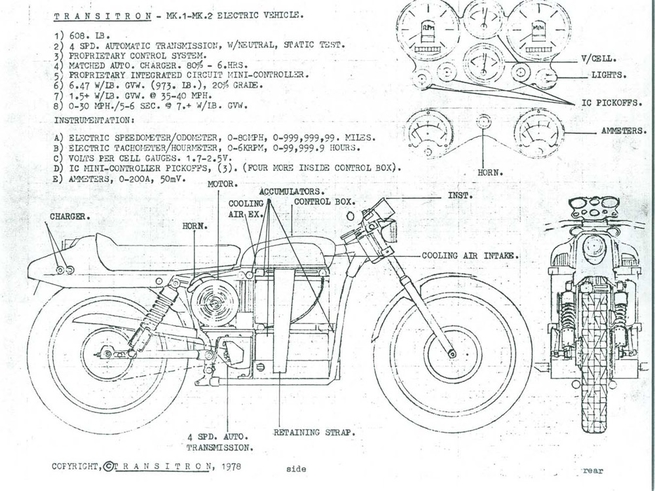 They started with a 1971 Harley-Davidson XLH Sportster.

The original 900cc gas engine was stripped and replaced with a variable speed 24V 90A electric motor. It was linked with a belt drive to a 4-speed automatic transmission that culminated in a direct chain drive to the rear wheel. A proprietary controller was developed and added.

Gauges for measuring current and voltage were mounted below an electronic speedometer and tachometer.

Battery power came from four deep-cycle lead acid batteries. Not lightweight by any means, but they didn’t have very many options. The earliest NiMH and Li-ion batteries were still in the proof of concept stage at the time.

Getting an electric Harley-Davidson off the ground

Steve and his team tried desperately to get Harley-Davidson to take notice. They had successfully proven that a few guys and a shop of spare parts could produce an electric motorcycle. With the resources of Harley-Davidson, surely a better performing version could be developed, right?

Together the duo got to work putting the bike through its paces. They racked up over 360 miles (579 km) of track testing in Wisconsin, not far from Harley-Davidson’s headquarters. 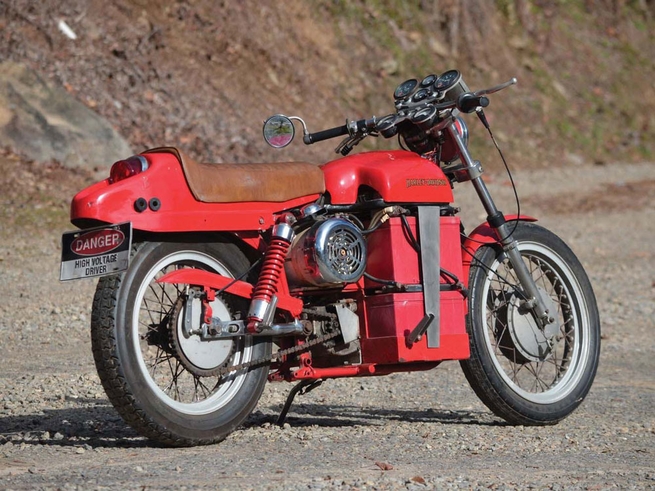 But after all of that testing and with over $70,000 invested in the project, no other investors or partners showed interest. An electric Harley just wasn’t in the cards. The bike ended up in Brook Steven’s museum. It remained there until his death in 1995. Most recently, it was auctioned off by Sotheby’s for $11,000 in 2014.

Harley-Davidson may have played hard to get in the 70’s, but the company finally saw the light nearly 40 years later.

After rolling out the LiveWire prototype in 2014, the project went through a series of design (and designer) changes until 2018 when the production version was announced.

Most recently, Harley-Davidson showed off the LiveWire at CES 2019.  The first true electric motorcycle from Harley-Davidson is already available for pre-sale. With a top speed of 110 mph (177 km/h) and city range of 110 miles (177 km), it certainly blows away its 40 year old grandfather. The $29,799 price tag has raised a lot of eyebrows, especially considering the more affordable competition breathing down H-D’s neck. The bike does feature high end components, innovative technology and is built in the US, as much as that can help to assuage its top dollar price.

And so while it might not be the electric motorcycle for everyone, at least the LiveWire is fulfilling the legacy of Steve Fehr and Brooks Steven’s work so many years ago.

And that is a much better ending to the story.

If you liked this example of a vintage DIY electric motorcycle conversion, then you’ll love what we have cooking.

I’ve just started working on converting my own 1969 Honda CA110 Sport Cub into an electric motorcycle. I’m still in the planning stages but we’ll be covering the build here on Electrek as soon as I have more progress to share.

Until then, check out the current state of the project below.