Fresh off the announcement of their first two electric motorcycle designs, the company has just unveiled specs for their third and latest bike, the Smart Old.

Following on the heels of the Smart Desert and Smart Classic, the Smart Old is built on a similar platform.

However, this version offers a stripped down design compared to the company’s first two bikes.

According to Fly Free:

“The Smart Old is inspired by Brat Style models, which originated in Japan. They are similar to Café Racer’s but are motorbikes with a cleaner look, where all nonessential parts of the bike are removed. Thus, they become easier to ride and unite the two styles.”

The Smart Old is powered by either one or two LG batteries mounted beneath the faux gas tank. Each battery is rated for 50 miles (80 km) of range in Eco mode, meaning two packs should be sufficient for 100 miles (161 km) of riding. The batteries are also rated for 700 charge cycles before reaching 70% of their original capacity.

The heart of the Smart Old is its mid-drive brushless motor. Just like the batteries, all three of Fly Free’s electric motorcycles share the same motor. It is rated for 3 kW of continuous power, though its peak power is likely higher for acceleration bursts and hill climbing.

The motor will offer three riding modes: Eco, City and Speed. Keep in mind though that as the speed and acceleration profiles increase, the range will naturally decrease. The bike’s 50 mph (81 km/h) top speed is only achievable with two batteries. With a single battery, the top speed is limited to a more modest 40 mph (64 km/h).

A smart key, USB charging and smartphone integration are all modern additions to the retro and minimalist style of the bike. And in keeping with a minimalist theme, accessories are quite limited.

However, that doesn’t mean storage is nonexistent. Riders will have the option to choose between three different cargo options: leather bags in either brown or black or a black ammo tin style steel box. 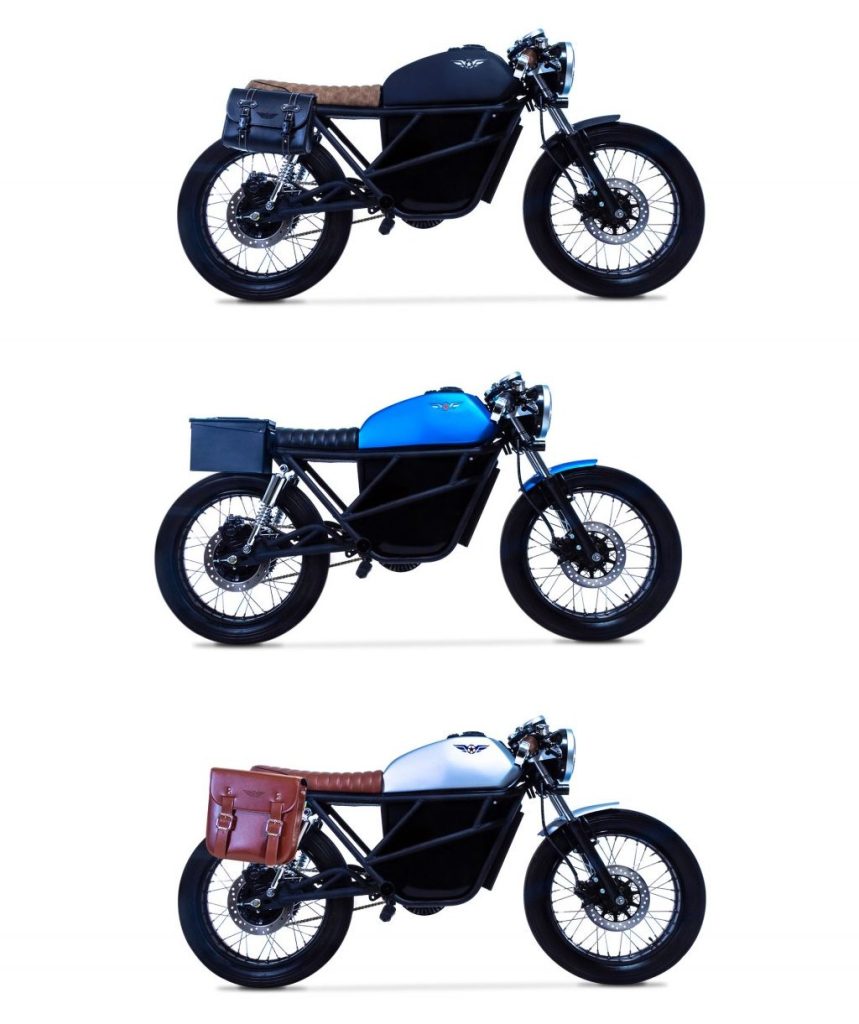 Isac Goulart, the Development Manager for Fly Free, informed Electrek that early production is expected to begin as soon as February of this year. He added:

“The pre-sale starts at the beginning of March and the delivery is scheduled for October. We are currently working towards DOT approval for the US and EEC certification for the European Union. Now we preparing for our pre-sale in the US, Canada and the European Union.”

The Smart Old will retail for $7,199 in the US. However, all of Fly Free’s models will be available for discounts of between 35-40% during the March pre-sale. That would bring the price of the Smart Old down to around $4,500.

While Indiegogo does take a number of steps to make the process as transparent and trustworthy as possible, it can still be a “buyer beware” situation. That is because pre-sales on Indiegogo and other crowdfunding sites are not necessarily legally binding. And while most companies have delivered their e-bikes and scooters, delays often occur and on rare occasions some products never get produced.

Giving Fly Free the benefit of the doubt and assuming that we’ll see these bikes on the road soon, they sure look like they’ll be a fun ride. Check out the Smart Old video demo below.

A 50 mph motorcycle would be something of the holy grail for city riding. Fast enough to handle any urban assault job, while maintaining a top speed low enough to allow less expensive motors and batteries. You could even use it for jumping from town to town on the right back roads and country highways.

However, Fly Free will have some serious competition. Super SOCO has their own TC Max coming out soon that hits 62 mph, and even electric scooters like the NIU NGT that can reach 44 mph (70 km/h) offer competitive specs for lower prices.

And of course, Fly Free still has to prove that they can deliver their electric motorcycles. The prototypes look great, but without announcing a solid plan for production, it is hard to properly gauge the future of the company.

I’m pulling for them though. I like the designs, the price is fair and the market needs these in-between electric motorcycles. I would have loved to see belt drive instead of chain, but at this price, belt drive is never a given. We’ll be checking back in March when pre-sales open to learn more about the company’s plans for the future.

What do you think about Fly Free’s lineup of electric motorcycles? Let us know in the comments below.