T’was the day before Christmas and all through the house, not a creature was stirring – not even a mouse.

So where could Micah be found, was he at his computer? No, he was outside – reviewing the crazy EMove electric scooter!

Of the dozen or so different models of electric scooters I’ve ridden in the past year, the EMove Cruiser stands out among the pack.

This scooter’s speed, power and range are all leaps and bounds above the competition. Just check out these tech specs!

Assembling the EMove Cruiser scooter is about the easiest thing you can do. Simply unfold the scooter and bolt on the headlight. That’s it. You’re good to go.

Of course before you head out, you’ll probably want to play with the settings. The EMove Cruiser is highly customizable, allowing you to edit parameters like the maximum top speed (on a scale of 1-100%), the power of your regenerative braking, whether it starts with a kickstart or throttle start, etc. I like to use the throttle start so that it feels more like an e-bike or e-motorcycle. And of course you know mine is set to 100% speed!

There are only two buttons on the display, so navigating the menu and editing the settings can be a bit frustrating until you get a hang of the interface. But after a few trips around the menu, I managed to get everything set up the way I wanted it. Now that the boring stuff is out of the way, you can get to riding! 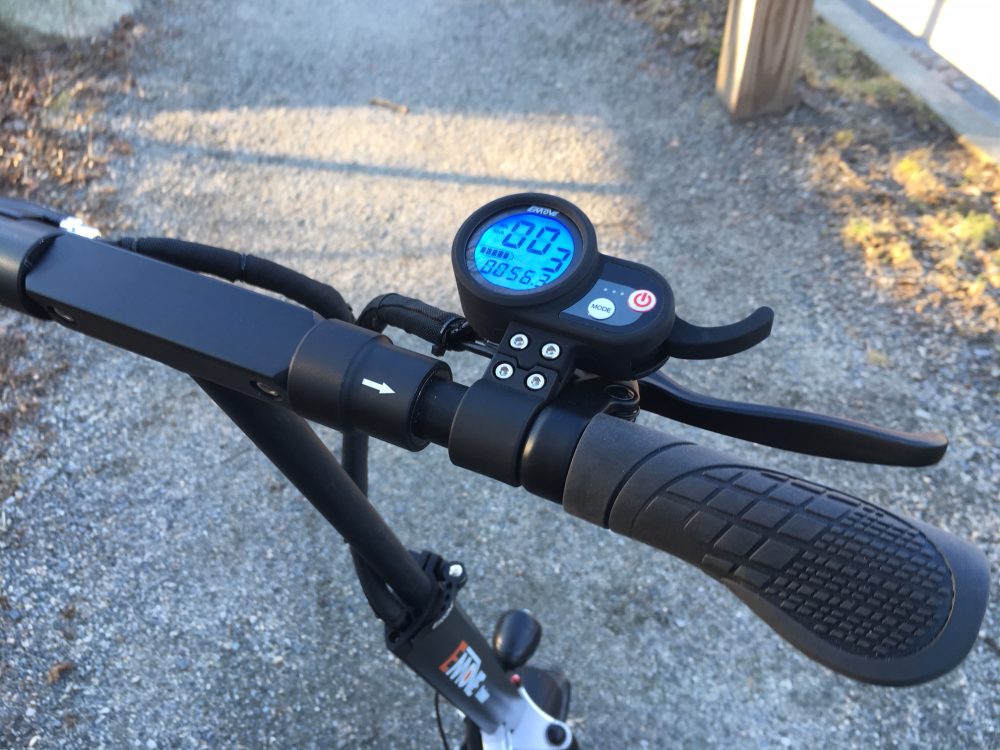 This scooter is hilariously fun to ride. The acceleration is powerful and will instantly bring a smile to your face.

If you’re used to lower power electric scooters like those used by Lime and Bird, then forget everything you already know. This is a new breed of scooter.

The EMove feels more like a fully fledged electric vehicle than an electric kick-scooter. Its strong acceleration and high top speed bring you up to the pace of traffic quickly, making it safer to ride in the road (if that is allowed in your city). Unlike slower scooters that would leave you getting passed in the shoulder, the EMove simply flows with the pace of traffic like a high-powered electric bicycle.

Riding this scooter feels like you’re essentially floating. When you’re on smooth pavement, you glide. When you move to the trail, you still basically glide because the suspension does such a good job of smoothing out the trail.

I even repeatedly took the scooter off curbs and ledges. While you certainly feel a bump when dropping 5 inches from the sidewalk to street, it’s still surprisingly smooth. The suspension absolutely does an excellent job of absorbing all of that shock.

If Voro Motors does one thing well, it’s making comfortable vehicles. We recently reviewed their sit-down scooter which has three levels of suspension!

The 10″ air-filled tires are also larger than most other scooters, meaning you roll more easily over pot holes and other obstacles. While some scooters use airless tires to avoid getting a flat tire, you just can’t beat the comfort of pneumatic tires.

The deck is also quite wide. I guess you need that much real estate to hold the massive 1.3 kWh battery pack. But the other advantage of the big deck is that your never feel like your feet are hanging off. Some other scooters have you riding a plank. With the EMove, it’s more like you’re riding a twin-size mattress.

The scooter also folds down to a manageable size. Both the handlebars and the stem fold, making the scooter actually quite small. When folded, it measures 15.7 in (40 cm) high and 49 in (124 cm) long.

One of the few oddities about this scooter that I wasn’t a fan of was the brake placement. Don’t get me wrong, the front and rear disc brakes work great. But for some reason, they put the front brake lever on the right handlebar and rear brake on the left handlebar. That’s the opposite of the bicycle industry standard, and most scooters have typically followed the bicycle industry in that regard.

However, higher power electric scooters and motorcycles generally have the same setup as the EMove, so it looks like the company chose to align their brake orientation with an e-moto feel instead of a bike feel. You could always reverse these if you wanted to, but you’d have to open up their nice cable management to do it.

Generally speaking, I think the EMove electric scooter is a great commuter vehicle. It’s fast, powerful, comfortable and convenient. With turn signals, six different lights and a horn that a car can actually hear, you’re much safer on this scooter than on some other toy-like scooters. Of course you still have to ride defensively, but at least you have more tools to use and enough power to get out of the way when necessary.

At around $1,200, the EMove Cruiser is not cheap. In fact, it’s downright expensive. But at twice the price of most other electric scooters, it goes twice as fast and four times as far. Plus, did I mention the suspension? So yea, it’s expensive. But I believe you’re getting your money’s worth with this scooter. Plus now you can take nearly $100 off the price just by using the coupon code ELECTREK.

If you just want a toy to play around with in your neighborhood, the EMove is probably overkill. But if you want a scooter that can take you to work, school, the local park and probably ride some decent single track trails, then it’s hard to look anywhere else.

What do you think of the EMove electric scooter from Voro Motors? Let us know in the comments below.