The Orca Mark I by Singapore-based Voro Motors will go down as one of the weirder little electric vehicles I’ve reviewed. But it’s a good weird, and I was surprised by how much fun this thing is.

With its triple suspension system and 48V motor, the Orca Mark I is a powerful and comfortable little electric crotch rocket.

While it looks like an electric bicycle, the Orca Mark I is technically more of a scooter.

It lacks functional pedals, and instead offers a pair of nice, thick foot pegs.

So while I keep wanting to call this an electric bike, it’s really a sit-down scooter with the performance of an e-bike.

You can check out my video review of the Orca Mark I below. And then keep reading for my more detailed review. 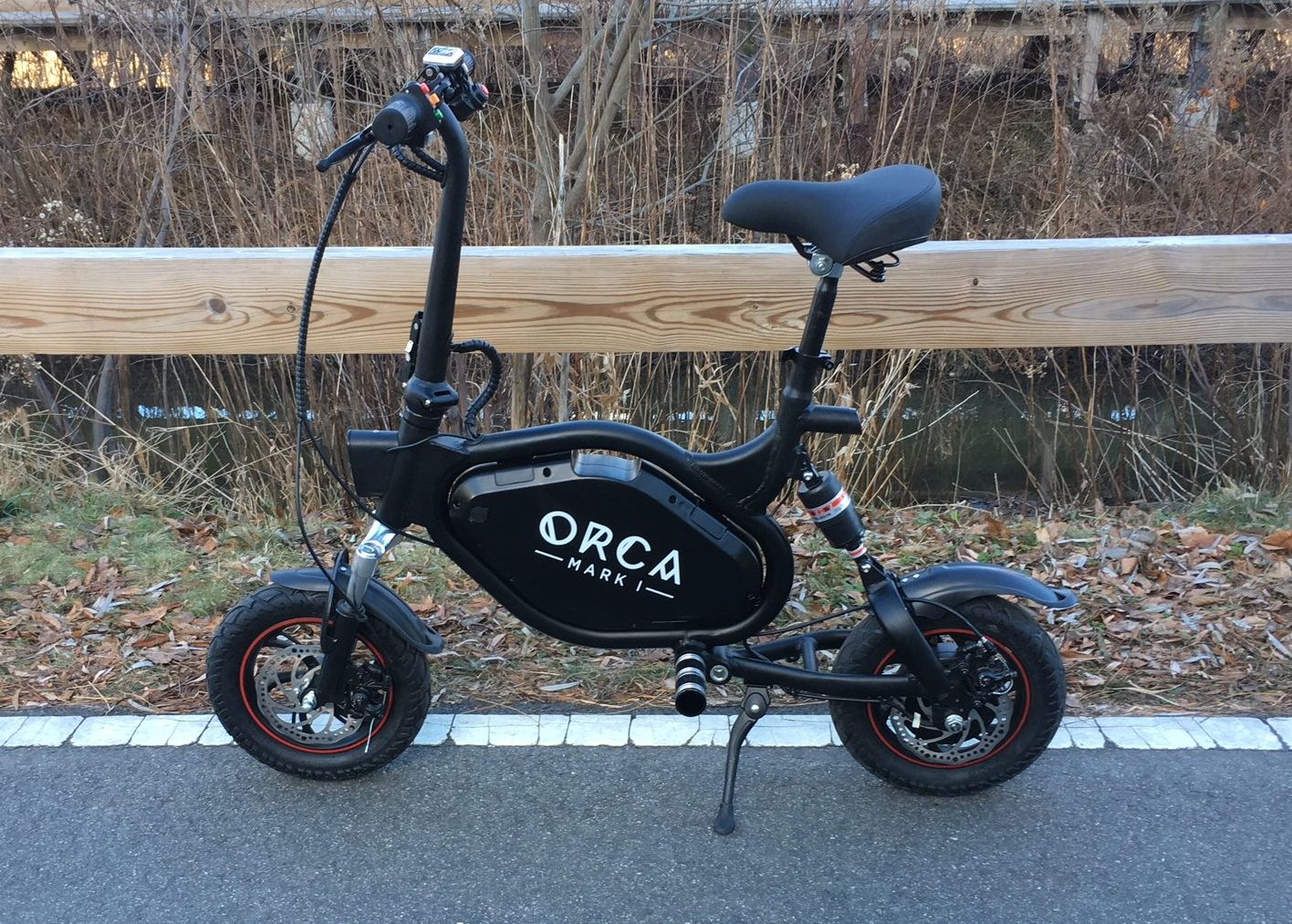 This little scooter has surprisingly good performance. It looks like the Jetson Bolt that we tested out earlier this month, but it is waaay more powerful. The rear motor is rated at 350 Watt continuous and 500 Watt max, but I’m guessing it puts out more than that. I didn’t crack the thing open to check, but most electronic speed controllers are rated at a minimum of 13-15A, which would put this scooter at closer to 600-750 W peak.

When you twist the throttle, you definitely feel the power. And that’s good, because there are no pedals to help the Orca Mark I get up to speed. It’s a motor or nothing situation – and this thing has a good motor on it. 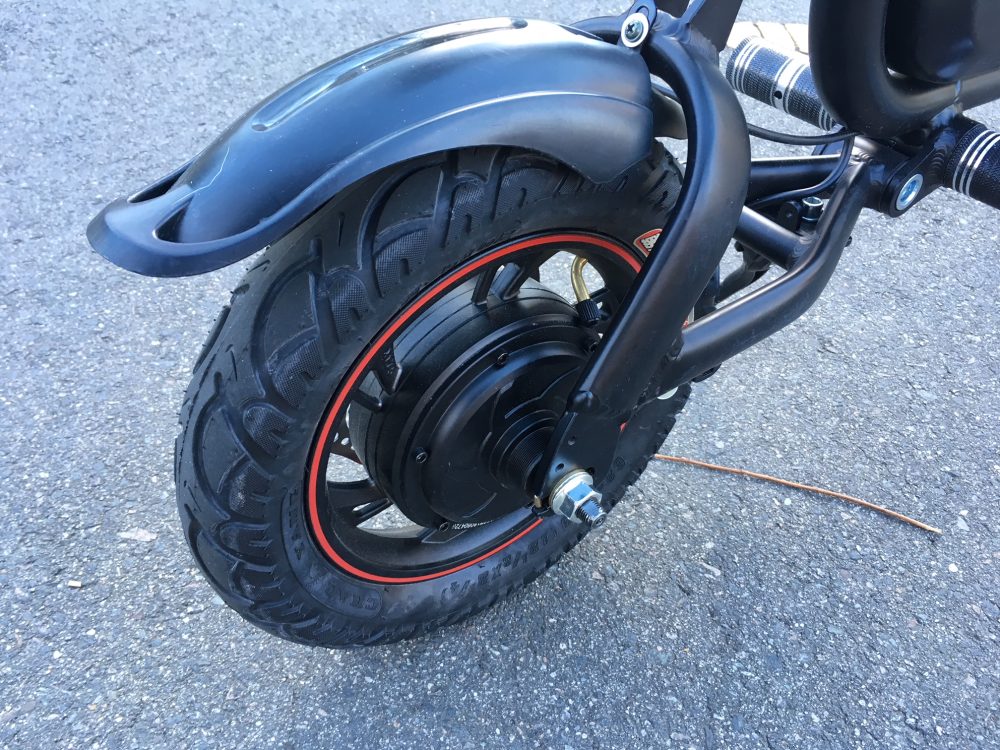 The early acceleration is quick, but then starts to taper off. While you reach 15 mph quickly, the last 7 or 8 mph take a bit longer. That’s true of most electric motors though. By the time you reach the scooter’s top speed of 23 mph though, you won’t care about the acceleration because you’ll be having so much fun on this thing.

The disc brakes also provide good braking power. I could lock up the wheels if I wanted to, though it’s best to avoid that. I would have loved hydraulic brakes, but the mechanical ones work fine, especially considering the wheels are so small.

The 12″ wheels help give this thing a small foot print at just 45 inches or 114 cm long. The tires aren’t fat tires, but they still feel huge for the wheels, and provide a nice cushy ride. 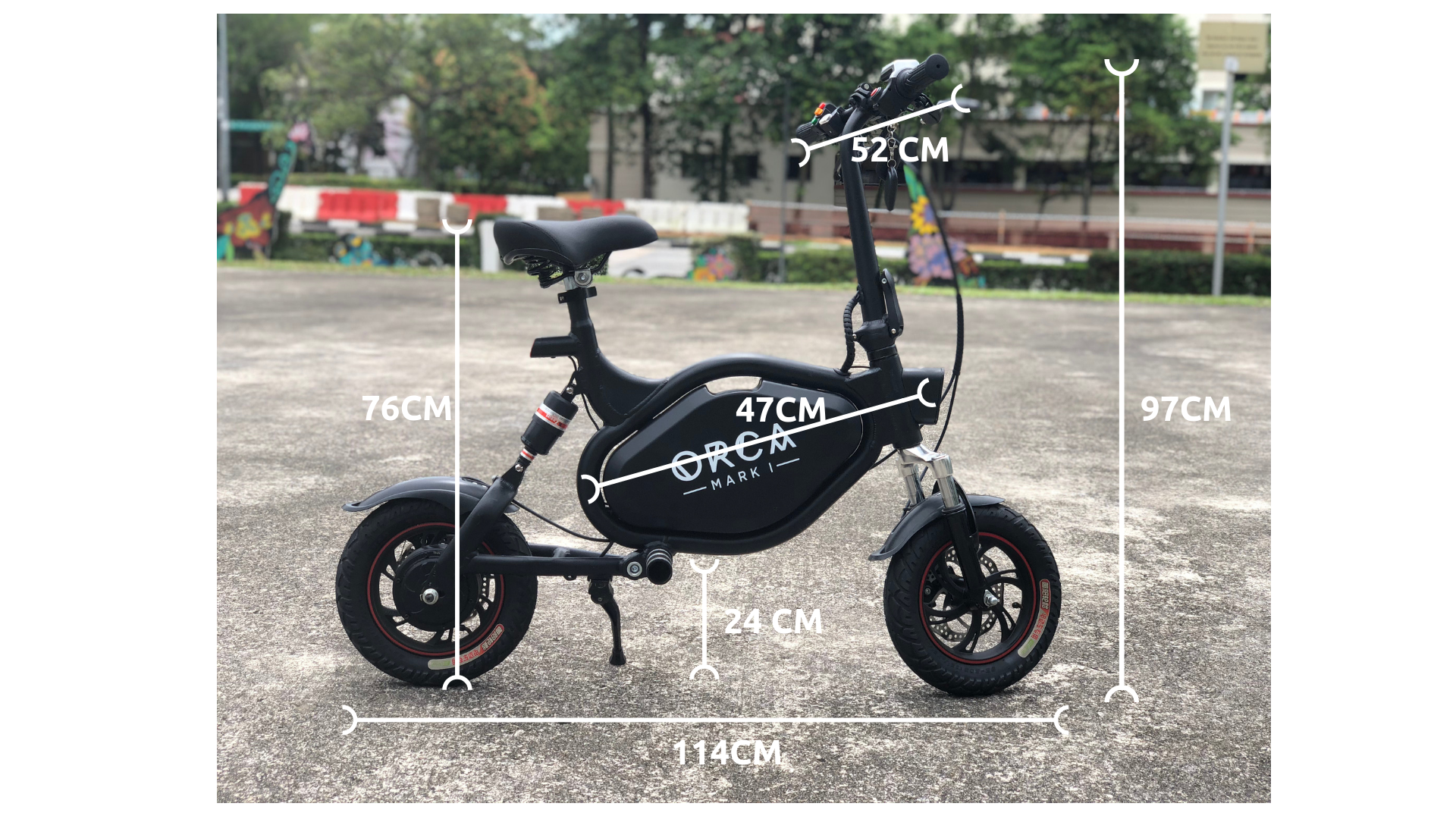 But more importantly than the tires, the Orca Mark I has three different points of suspension. There’s a suspension fork up front, a spring supported swingarm in the rear, and a suspension seat on top! While these mini-bike/scooter things normally have harsh rides, the Orca Mark I absolutely glides on the streets. The suspension doesn’t have huge travel so this isn’t really meant for tough off-roading or completely eliminating pot holes. But what it does do is cut out all of the road shock on normal roads and sidewalks while greatly reducing the harsh shock of pot holes and other larger obstacles.

Basically, it makes normal rides a hell of a lot smoother.

For such a little machine, the Orca Mark I absolutely performed well above my expectations. It’s not going to match the performance or comfort of multi-thousand dollar full suspension electric bicycles, but it performs quite well at a fraction of the price.

While good performance is nice, the features are what set this bike apart from some of the other mini e-bike/scooters on the market.

A USB-charger is built into the handlebars and allows you to top your phone or other devices up while on the go, or to use your e-bike like a mobile battery bank. While that feature might sound basic, you’d be surprised how many two-wheeled EVs lack it. Zero electric motorcycles don’t even have a USB charger for crying out loud.

The Orca Mark I also comes with two remote key fobs that allow you to lock and unlock the bike at a distance. When locked, the bike can’t be started by a would-be thief. You can set the alarm using the remote, which will be triggered if the bike is moved. The alarm isn’t terribly loud, but it should get noticed. I’d definitely think twice if the bike I was about to steal set off an alarm on me.

There’s also a horn button, though I’m not a huge fan of electrical horns on e-bikes. A bell is a much more universally understood noise, and doesn’t shock pedestrians as much as an electrical horn beep. And those horns usually aren’t loud enough for drivers to hear, which is why I generally add a cheap $7 motorcycle horn to my road-worthy e-bikes.

Front and rear LED lights are built into the Orca Mark I and are powered by the main battery pack. I absolutely love when I don’t have to worry about keeping lights charged or replacing AAA batteries. The headlight isn’t going to completely illuminate your path on a pitch black road, but it works excellent as a “be seen” type of light. No car will miss you coming towards them with this headlight.

The throttle has a battery indicator mounted next to it that offers two different battery meters. A row of LED lights gives you a simple indication of your battery percentage in a 25%, 50%, 75% and 100% setup, while a voltage readout shows the exact battery voltage at any given moment. I love knowing what’s going on with my battery, though not everyone will be able to interpret the voltage meaningfully. Here’s a cheat sheet: on a 48V battery like this, fully charged is 54.6V while dead is around 39.0V.

The Orca Mark I also folds at the handlebars, making it shorter and easier to stash in a back seat or trunk of a car. The bike isn’t super lightweight at 44 lbs (20 kg), but you can still use the carry handle to lug it around and up stairs if you’re decently strong. You could also add a luggage strap between the handlebar’s folding mechanism and the seat post. 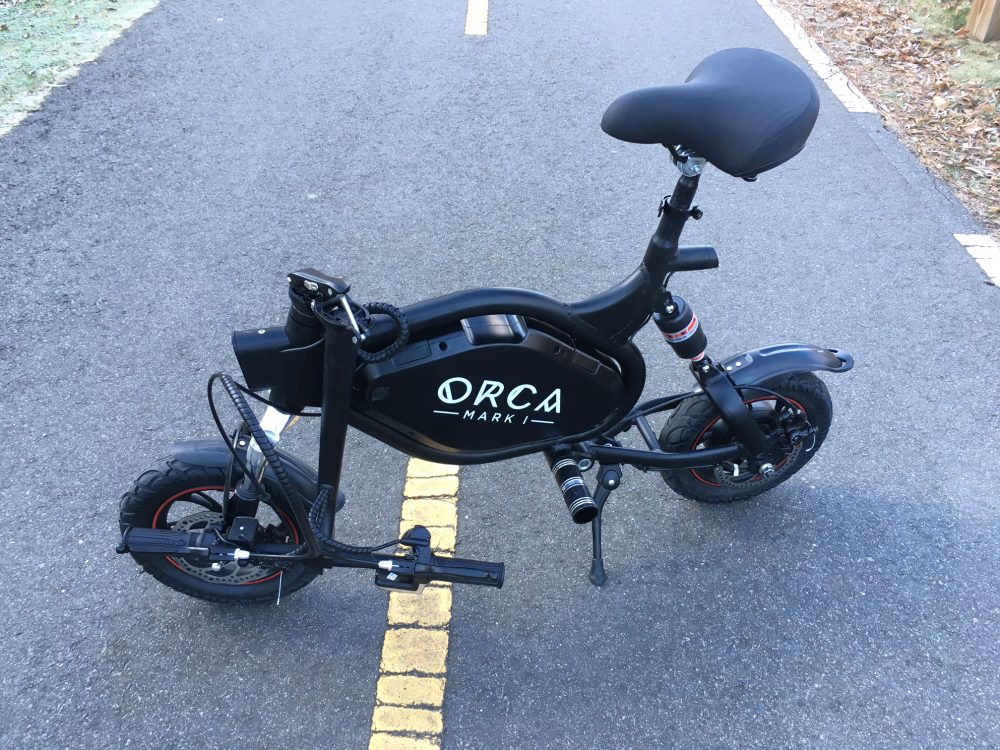 The Orca Mark I is currently available for pre-order on Kickstarter for $999. As you know, we rarely cover crowdfunding projects from companies that don’t already have a proven track record or unless we can try the product out ourselves in advance. In this case, I can confirm that the Orca Mark I not only exists, but works great.

That doesn’t mean that you should ignore the risks of crowdfunding. Voro Motors will still have to produce and deliver the Orca Mark I to pre-order holders. The company plans to begin deliveries in January if everything goes according to plan.

[Update: with only a few days left in the Kickstarter, Voro Motors has launched the Orca Mark I on Indiegogo as well to extend the pre-order period.]

I’d summarize the Orca Mark I as a great little commuter scooter. It has most of the advantages of a scooter in terms of small size and portability, but has the comfort of a full suspension electric bicycle.

When you’re scooting around on city streets that are rarely ever perfectly smooth scooter paradises, the effect that full suspension has on smoothing out the ride can not be overstated.

And with the 48V system usually reserved for larger and more powerful electric bicycles, this little scooter has the power and bottom-end acceleration to bring a smile to your face with every ride.

But what do you think about the Orca Mark I? Let us know in the comments below!