Tesla is launching today a version of Model 3 with a new ‘mid-range’ battery pack for $45,000 before incentives.

The new version, which was never announced, is coming as a surprise and it changes the whole pricing structure of Model 3.

While many reservation holders are waiting for the base version of the Model 3 with a standard battery starting at $35,000, Tesla is coming out of nowhere with this unannounced new option.

Model 3 has been available for over a year now with the ‘Long Range’ battery pack version for 310 miles of range.

Without any option, the vehicle started at $49,000 – significantly more than the $35,000 base price promised by Tesla, but the company always promised that a base version was coming soon.

Instead of that version, Tesla is now launching a ‘mid-range’ battery with 260 miles of range for $45,000, according to an update to the Model 3’s online design studio: 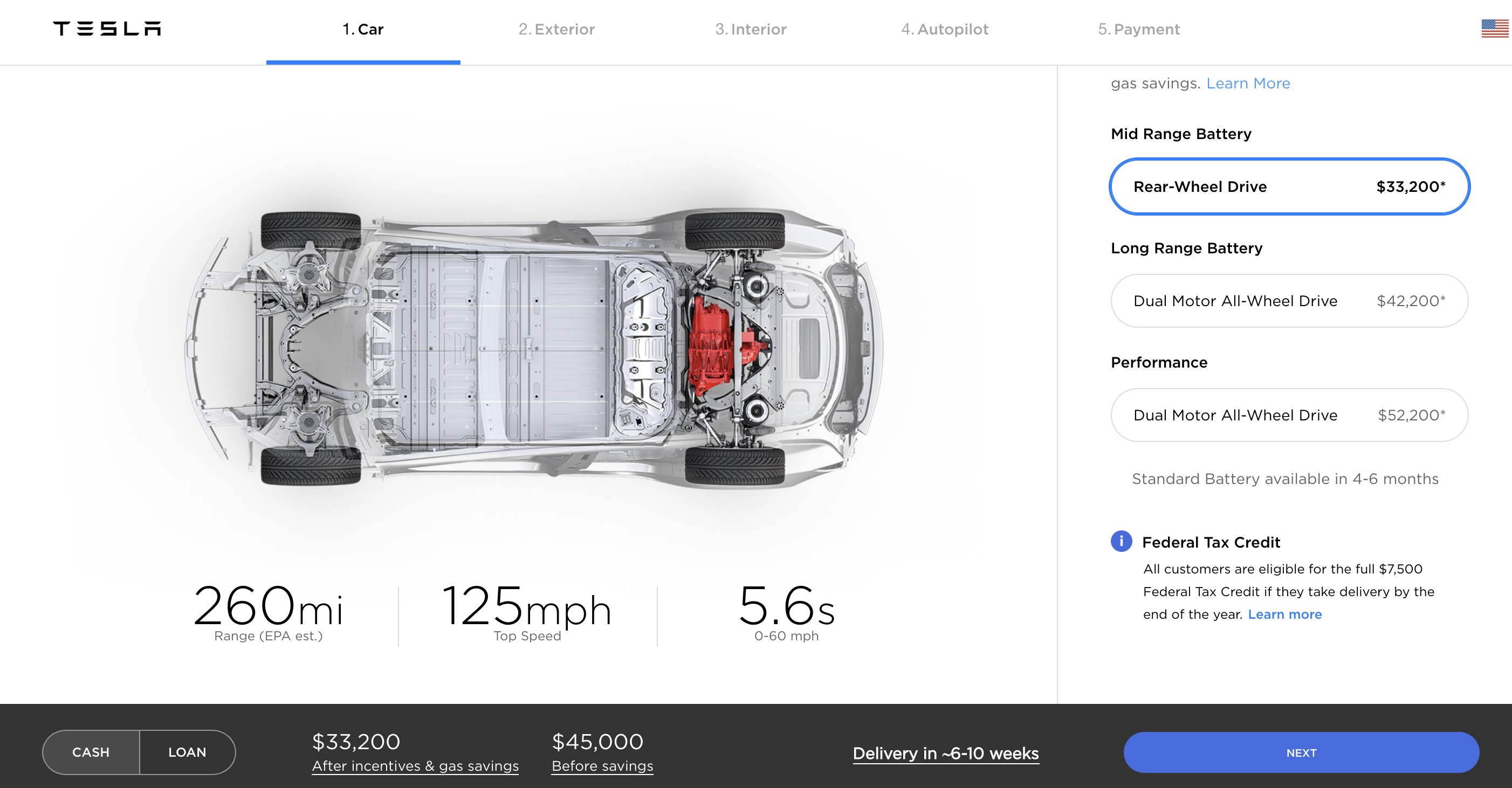 With the launch of the new battery pack option, Tesla is making several changes to the Model 3’s price and option structure.

The main change is that the rear-wheel-drive option is now only available with the new mid-range pack and now the Long-Range pack only comes with a dual motor all-wheel-drive powertrain.

Update: CEO Elon Musk says that RWD is still available with Long Range battery pack if ordered “off menu” for the next “week or so”.

The price of the dual motor all-wheel-drive powertrain, which has been on a roller coaster with 4 changes, has been changed again.

Tesla is also now making the white interior available with all configurations and it is changing the name to “black and white interior”: 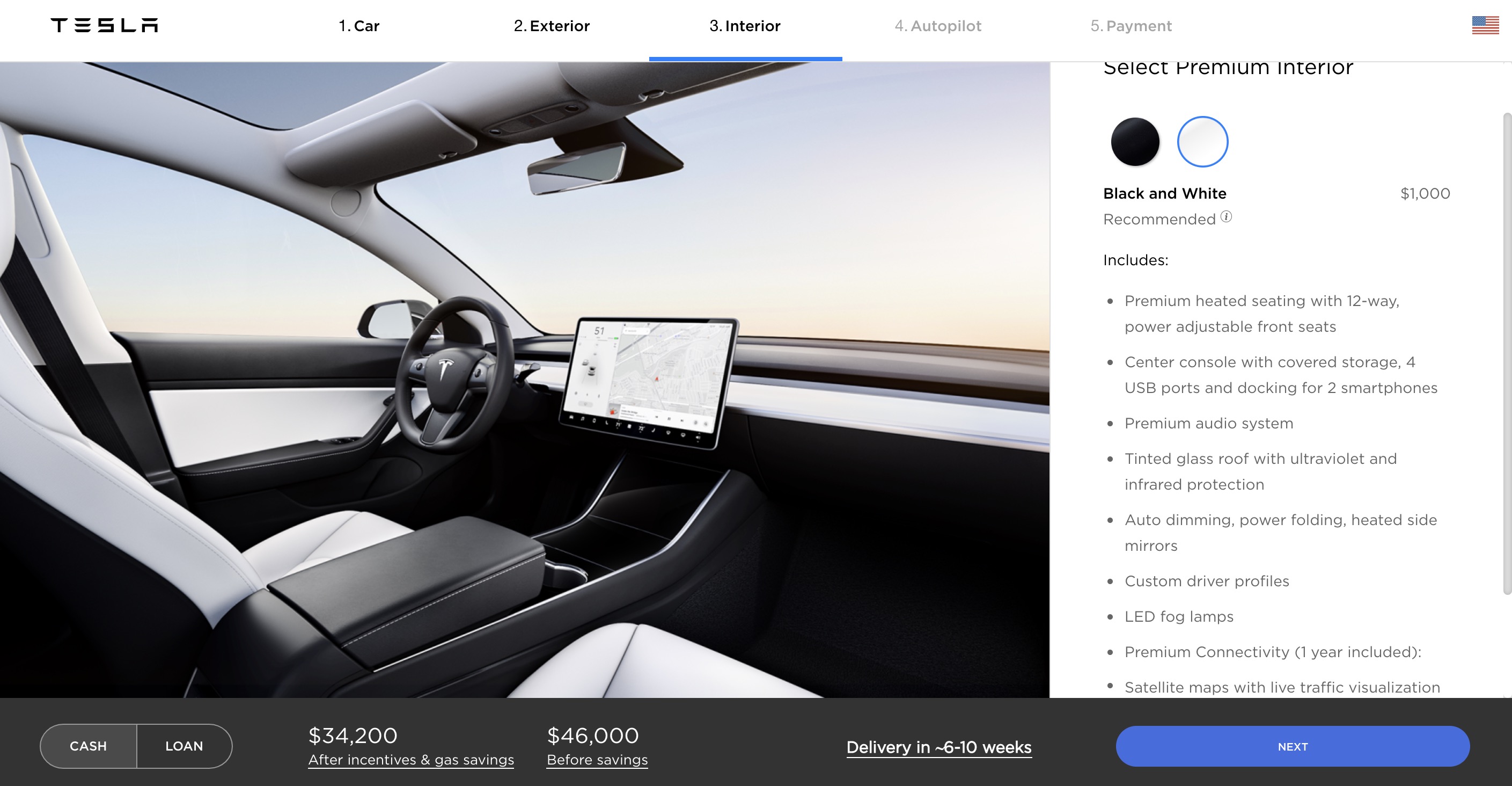 Of course, the biggest question on people’s mind is: what does it mean for the promised $35,000 base Model 3?

Tesla sent us the following statement about the change:

“As Model 3 production and sales continue to grow rapidly, we’ve achieved a steady volume in manufacturing capacity, allowing us to diversify our product offering to even more customers. Our new Mid-Range Battery is being introduced this week in the U.S. and Canada to better meet the varying range needs of the many customers eager to own Model 3, and our delivery estimate for customers who have ordered the Standard Battery is 4-6 months.”

This is the same timeline that the company has been guiding for the past month.

We asked Tesla about the new situation with the Model 3 battery pack options and the company confirmed to Electrek that the new pack is not a Long-Range pack with a software-locked capacity, but it has the same architecture with fewer cells.

The new battery pack sort of came out of nowhere.

It’s not an easy move to wrap your head around, but at the end of the day, the main difference is that a new Model 3 option with less range and a slower top speed is now available for $4,000 less than the previously cheapest Model 3 option.

Now the best news is that Tesla insists that it doesn’t interfere with the plan to launch the base version battery pack, but it certainly creates a murkier situation.