A Tesla Semi prototype has been traveling around the southwest over the past few weeks and it has now stopped to make an interesting appearance at the headquarters of a potentially critical Tesla Semi customer; trucking giant J.B. Hunt.

J.B. Hunt is one of the largest freight and trucking companies in the US.

The company was amongst the first to place a Tesla Semi reservation when the automaker unveiled the first prototypes last year.

Now Tesla has brought one of those electric truck prototypes to J.B. Hunt’s headquarters in Arkansas today.

Pictures of the Tesla Semi’s appearance have made their way to social media (Instagram: davisbriank and blackfocal) 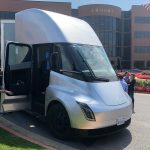 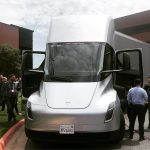 Reddit user freakonomics3415 got an even closer look at the truck when it was at J.B. Hunt earlier today and shared images of two well-hidden cameras that we haven’t seen before and a picture of the interior:

While J.B. Hunt was amongst the first to place a Tesla Semi reservation, the company never revealed how many trucks they reserved.

But they could become a very important customer for Tesla Semi considering the size of their fleet, which is only matched by a handful of other companies like FedEX and UPS.

As we discussed during our podcast earlier today, if Tesla can deliver on its expected cost of operation of $1.20 per mile, it will be a no-brainer for companies like J.B. Hunt to quickly convert their fleet to Tesla Semi.

Diesel truck makers don’t believe Tesla can bring to market a long-range all-electric truck with those kinds of economics as soon as next year, which is when Tesla plans to release the vehicle.

They want to see the proof of the vehicle’s capacity and economic advantages.

We have been tracking the Tesla Semi test program as the automaker claims it is seeing even more potential for improvements on the already insane specs that they announced last year.

After some tests, CEO Elon Musk said that the Tesla Semi production version will have closer to 600 miles of range on a single charge instead of the previously announced 500 miles.