Boosted Boards recently unveiled their new lineup of electric skateboards, improving the specs on their longboards and introducing a brand new and more affordable shortboard in two performance variations. Previously offering only longboards, Boosted’s new shortboard poises the company to compete directly with a growing field of smaller shortboard rivals.

One of the biggest upgrades to the new Boosted Plus ($1,399) and Boosted Stealth ($1,599) longboards is the inclusion of the larger range extender battery as a standard feature. The previous Boosted Dual+ came with a stock battery of less than 100 Wh. These smaller battery packs allowed the boards to be carried onboard many airlines, but also limited range to around 6-7 miles.

Now Boosted’s entire longboard lineup comes stock with larger batteries that offer 14 miles of range – more than most people can ride in the city. New trucks, wheels and decks were also developed in-house by Boosted to maintain more control during the manufacturing process.

As of now, Boosted doesn’t plan to start shipping its newly announced longboards or shortboards for the next 8-10 weeks, but you can already place a pre-order directly on BoostedBoards.com.

The Mini S is significantly cheaper than past Boosted Boards, at just $749. That lower price was achieved with understandably muted entry-level specs. Unlike the Plus and Stealth longboards, which can reach speeds of 22 and 24 mph, the Mini S can only reach 18 mph, and also has a shorter range of just 7 miles. But for half the price of its big brothers, the Mini S is still a very potent electric skateboard. 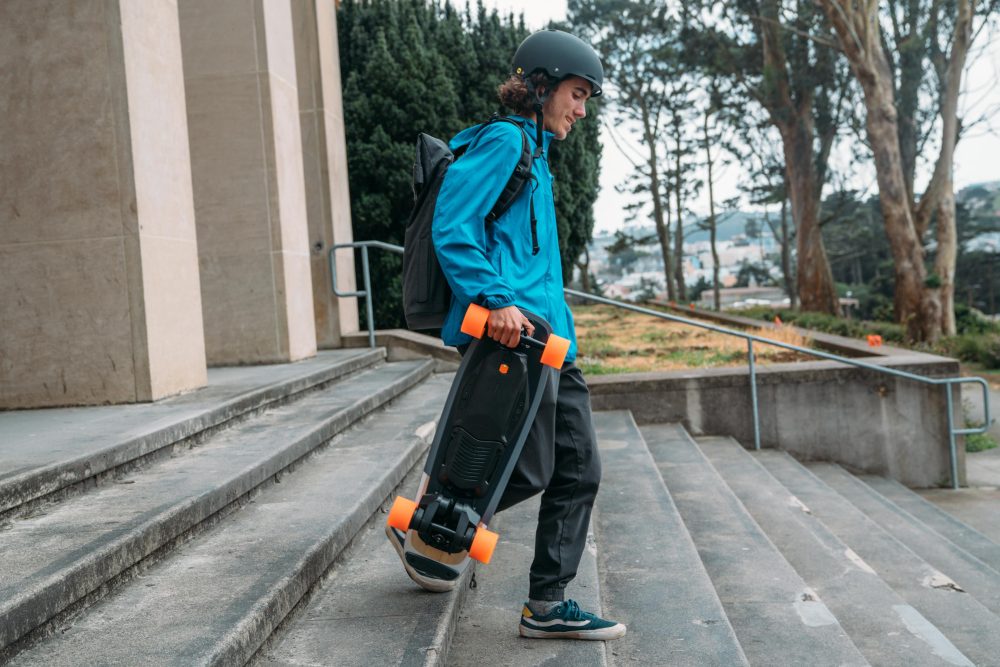 For those looking for higher performance in the same small package, Boosted’s Mini X has you covered. For $999, the Mini X doubles the range to 14 miles, and increases the speed to 20 mph.

While electric longboards have been the go-to format in electric skateboarding for years, a new wave of shortboards has emerged as a viable option. Ride Riptide has their own electric shortboard, the R1, which sells for $599 and has similar performance to the Boosted Mini S, capable of 18 mph and 7 miles of range. The R1 is also marketed as an extreme-portability alternative to conventional electric longboards.

Acton has an even cheaper option with its $399 Blink S, also rated for 7 miles of range but with a top speed of only 15 mph and less powerful hill climbing due to its single wheel drive hub motor.

All of these electric shortboards have similar designs based on shorter wheel bases and more rigid decks with included kick tails (the ramp part) at the rear. The main benefits of these shortboards are their reduced size and increased maneuverability. While I do love my 41″ electric longboard, the two biggest inconveniences are definitely its large turning radius and longer length. When I’m riding around the city, sharp turns often require me to hop off and physically reposition my board. But with a shortboard, the kick tail allows you to pop the nose of the board up and make quicker, sharper turns without dismounting.

Whenever I meet friends at a bar or restaurant, it inevitably takes me more than a few seconds to figure out how to stow a 41″ longboard under the table or bench and keep people from tripping over it. A shortboard is much easier to hide out of the way when you aren’t using it.

Shortboards do have their drawbacks though. Unlike the longer, flexible decks of most electric longboards, electric shortboards have much more rigid decks with little to no flex. This means that you’ll feel the shock of every bump and pebble in your feet and legs. Also, the trucks (the pieces holding the wheels to the board) on electric shortboards are usually positioned much closer to your feet, sometimes directly underneath you. This too contributes to transferring the road vibration more directly to your feet.

A shorter wheelbase can also make it harder for a beginner to learn to ride. Longboards are inherently more stable because they turn slower and tend to track straighter. This makes them ideal for cruising and long distances, but like we mentioned earlier, they aren’t so great at sharp turns. While shortboards are better at sharp turns, they are also more squirrelly at higher speeds due to that quicker turning. This likely won’t be an issue for seasoned riders that are accustomed to controlling a skateboard, but new riders will likely find longboards to be more stable and comfortable in the beginning.