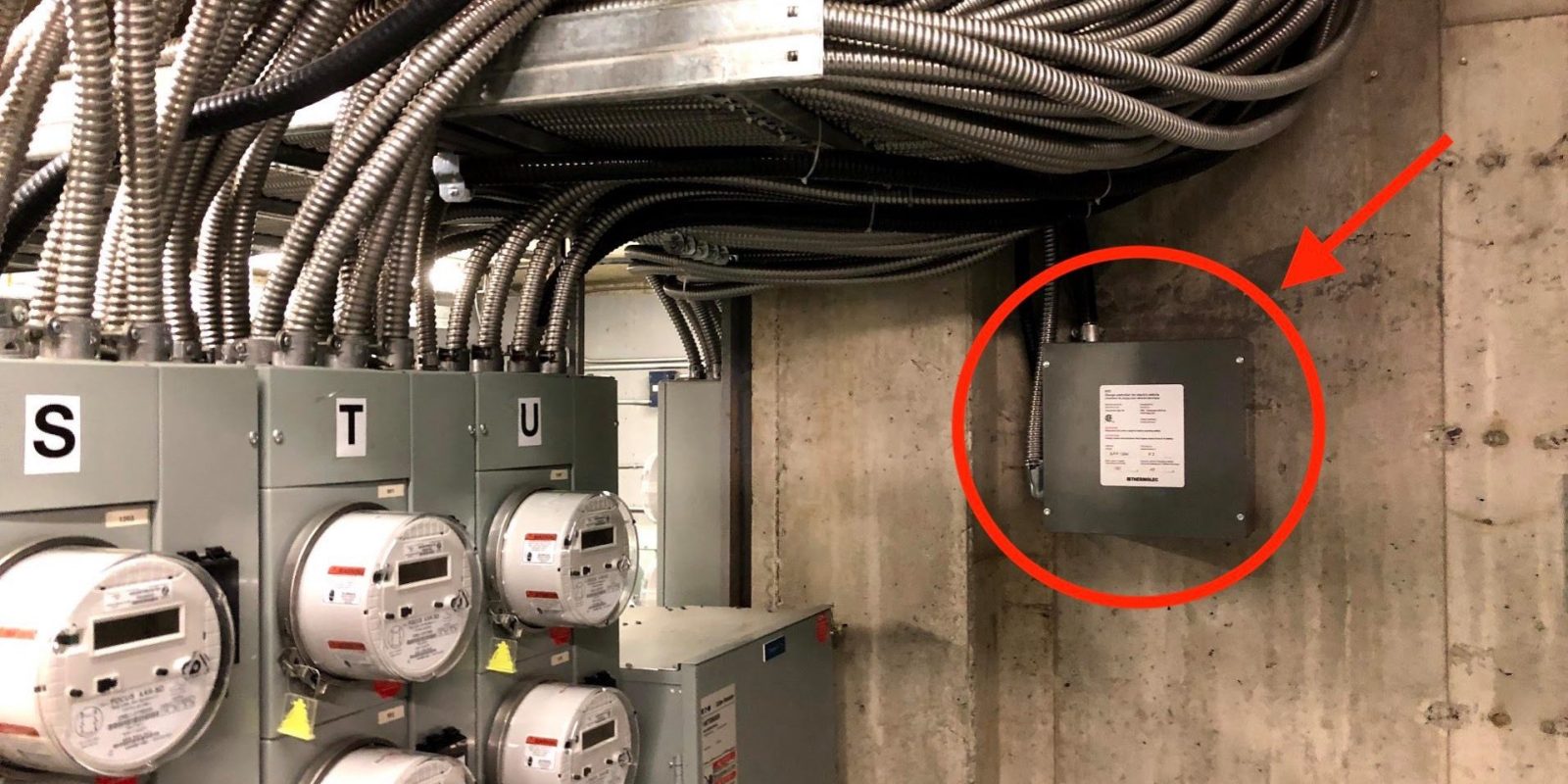 Electric vehicle charging infrastructure is becoming less of an issue and more of a big business, but there’s still an aspect of it that has been somewhat neglected: charging for condominiums and apartments.

Today, we take a look at a boring little box that can fix the nightmare of installing EV charging stations in those buildings.

There are a few different types of challenges associated with installing a charging spot at a condominium.

First off, there’s often a hardware limitation because most electric panels are limited to 100 amps per condo.

It means that they often need an upgrade or to go through the building’s panel used for common spaces, like halls and garages, but that leads us to the other issue: dealing with the condominium’s board or syndicate of co-owners.

Depending on the board’s policies, you might need approval based on the scale of the project and then there’s the issue of accounting for the electricity usage of the charging station.

Lilco Électrique, the preferred installer of Tesla charging stations in Québec, ran into the problem one too many times and decided to address the issue.

David Corbeil, son of Lilco co-founders Pierre Corbeil and Linda Laliberté and the one in charge of developing the company’s EV charging station business, spun off a new company called RVE with the goal of leveraging their experience to simplify the deployment of charging points in condominiums.

They developed the previously mentioned “boring little box”, called a DCC (Demand Charge Controller). It can be installed between a condo’s meter and electric panel to divert some of the power to a charging station while monitoring the electricity consumption of the panel in order to prevent exceeding its limit. 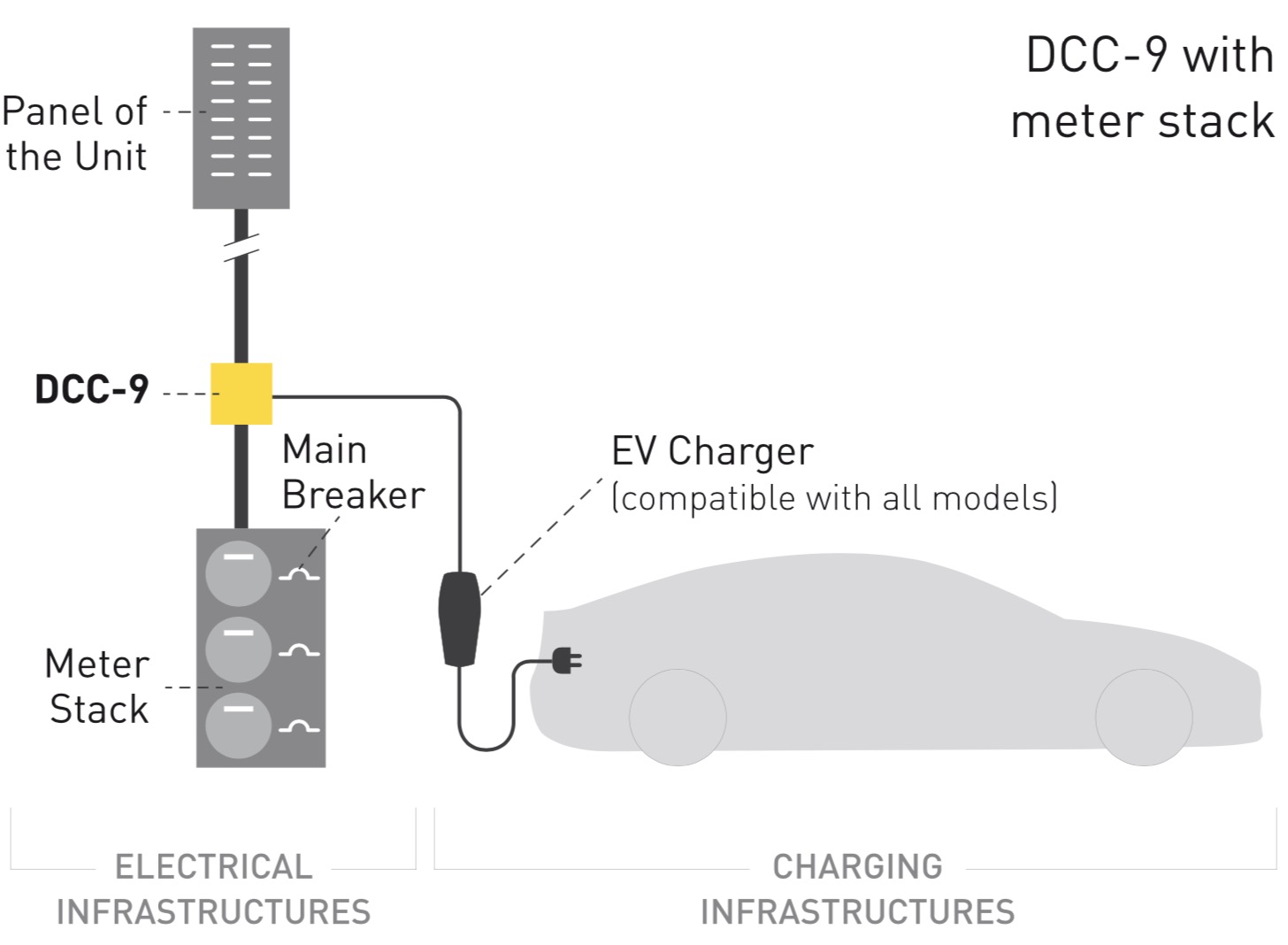 Most importantly, it does all this with a low footprint installation that only involves the electric infrastructure of a single condo and not the rest of the co-property, which should facilitate the approval process from the condo board in theory.

You only need a small space in the electric room of the building and the rest of the footprint is dependent on how far your parking spot is from the room.

We visited an electrical room of a condominium complex with over 100 condos near RVE’s offices in Laval, Quebec:

That’s a typical electrical room of a large condominium complex. All the meters are located there and they are linked to the 100-amp electric panel in each condo.

RVE installs the DCC there and then deploys a cable all the way to the owner’s parking spot to install a plug or charging station.

The solution is charger agnostic – meaning that it can be used to deploy a simple NEMA 14-50 plug or any level 2 charging station, like a Tesla Wall Connector or a Flo Home EV Charging Station.

It doesn’t mean that it is cheap, but it’s going to be the most affordable way to get a level 2 EV charger in most condo complexes.

In Canada, RVE told me that they sell the DCC for about $1,100. From there, the cost of the installation can vary a lot depending on the situation.

That said, the installation is linked to your unit’s meter, which adds value to your condo.

Overall, it would definitely be cheaper if you can convince all owners or most to install charging stations, but that’s almost impossible to get passed in a condo syndicate.

The DCC offers an option for a rogue EV owner in a condominium complex to get a more than decent charging solution.

RVE has already installed hundreds of DCC’s, mostly in Quebec, and said that they haven’t had a problem with a unit yet.

They now have all the necessary certifications for the US and they are launching the device on the market. They are selling it for $945 USD and they plan to work with electricians who are known for installing charging stations, like Lilco Électrique in Quebec, but they also offering all the documentation for any electrician to install the device.

I think this is a smart solution that both solves the hardware problem and facilitates dealing with your condo board.

Urban charging is arguably one of the biggest bottlenecks for EV adoption, but I think we are starting to see a lot of different solutions.

Now add to that the DCC and we are starting to see a lot of different solutions enabling urban EV ownership.

Most of these solutions are not perfect, but I would argue that they all beat having to go to the gas station.