What do you get when you combine the buoyancy of a boat, the power of an electric bicycle and the efficiency of hyrdofoils? An awesome new way to zip across the water, apparently.

The Hydrofoiler XE-1 is just that: part electric bicycle, part watercraft. Designed by New Zealand startup Manta5, the XE-1 is built on an aluminum frame with carbon fiber hydrofoils and propellor that lift the craft out of the water as you pick up speed.

Hydrofoils work like airplane wings underwater. The faster the craft moves, the more lift is generated by the hydrofoils. By placing the hydrofoils and propellor at the bottom of the XE-1, they remain the only components left in the water at cruising speed, which means you need much less power and energy to maintain your speed.

This added efficiency helps the XE-1 reach an average cruising speed of 11-14 km/h (6.8-8.7 mph), though Manta5 claims that experienced (and fit) users can achieve even higher speeds.

Power is provided by a combination of your own two legs and a 400 W electric bicycle mid-drive motor that adds power assist as you begin to pedal. The power assist is variable and user-selectable, meaning you can either get a harder workout or just fly around the bay with ease.

The XE-1 is designed for both calm and choppy water, meaning you can operate it everywhere from lakes and rivers to even the open ocean. 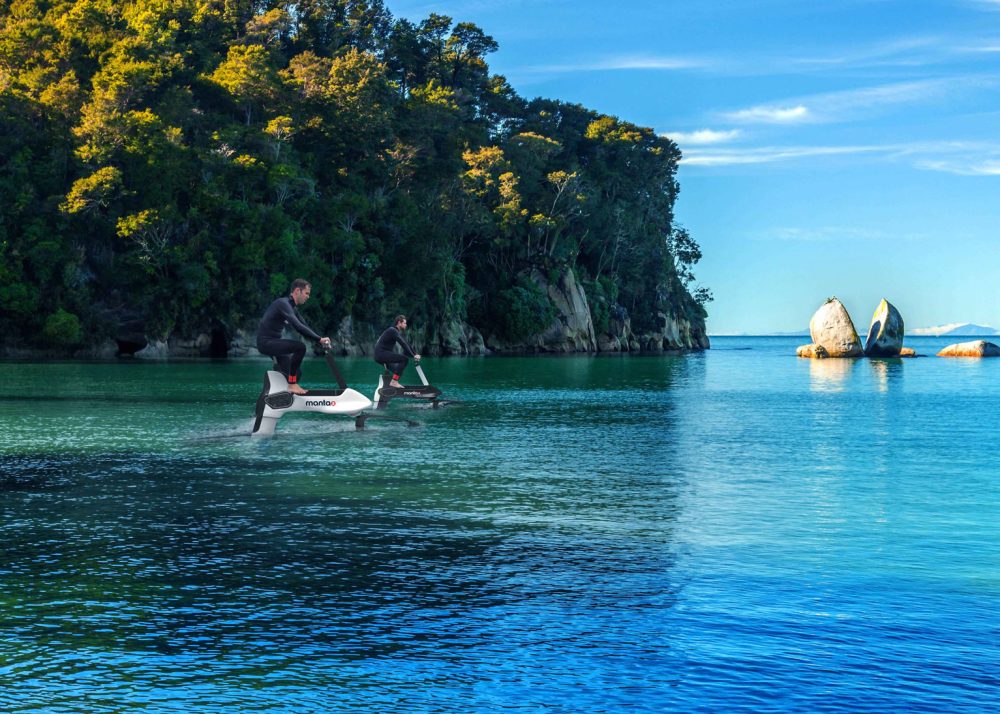 The craft is also designed with environmental concerns in mind. According to the company:

The waterproofed battery will provide 80-90 minutes of riding (or sailing?) for an average 85 kg (187 lb) user on calm water. Recharging can be performed by connecting the easy access battery to any standard wall outlet.

The XE-1 uses a proprietary gearbox that connects to a hybrid chain and shaft drive system intended to keep the craft as silent and streamlined as possible. 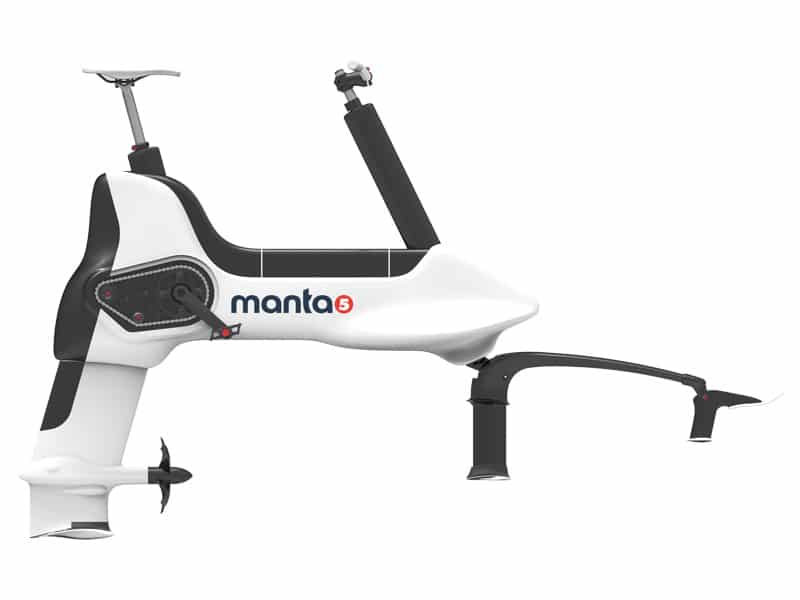 The buoyancy has been optimized for both above and on-the-water operation through the use of a modular design. The gearbox, motor, hydrofoils, propellor, battery pack and buoyancy modules can all be swapped and upgraded to achieve different performance levels for various types of use.

The battery housing also includes a built-in display that indicates battery level, cruising speed and flight level, which allows the user to optimize the planing speed and riding time.

The front wingspan measures 1.2 m (3′ 11″) while the rear wingspan measures 2 m (6′ 7″), but the entire craft can be disassembled with just two hex wrenches to stow in a van or SUV. At just 22 kgs (48.5 lbs), the XE-1 is manageable, so you should be able to wrestle it into the water by yourself or with the help of a friend. For now, the Hydrofoiler XE-1 is only available in New Zealand, but pre-orders for international customers should open later this year.

Cheaper water bikes and pedal boats are certainly nothing new, though past water bike attempts have largely been pedal-only pontoon style crafts. I remember the less than thrilling experiences on them at camp, which amounted to something between a nauseating exercise bike ride combined with all the fun of trying to move a fully laden canoe by yourself.

However, the combination of an electric bicycle motor and efficient hydrofoils make this an entirely new type of water bike. Instead of watching floating leaves pass you by while you furiously pedal in vain, it looks like XE-1 riders aren’t exerting much effort while zipping around fairly quickly above the water.

I was skeptical of how well the XE-1 would handle anything other than calm water, but the company has uploaded videos (example below) showing it tackling waves and riding through the wake of motorboats, which is pretty impressive. Even small boat wakes have nearly capsized my kayak, so to ride through them with the ease shown by the XE-1 is no small feat.

With a price tag of over $5,000 USD, this isn’t going to be on everyone’s shopping list. But they are still affordable enough that resorts and lake/beach-front businesses could invest in fleets for vacation rentals, especially since the hot-swappable batteries mean they could theoretically run all day. So it might just be that you find your way onto one of these cool crafts sooner than you think!