After delaying the launch of its e-tron quattro electric SUV amidst the arrest of its CEO over the Dieselgate scandal, Audi is now still partially unveiling the new electric vehicle by releasing images of the interior.

Audi is quite proud of its e-tron quattro prototype camouflage wrap. It even wrote a blog about it and it is not taking it off just yet.

But it is revealing more of the interior of the upcoming all-electric SUV, which is reportedly still planned for a launch by the end of the year.

At the Royal Danish Playhouse in Copenhagen, Audi unveiled the latest version of the etron quattro’s interior in front of a crowd.

Here are pictures that the German automaker released to the media today following the event:

Audi describes the design of the interior in a press release:

“The stage in the interior of the Audi e-tron prototype forms a large arc, the wraparound. It envelops the extensive instrument panel with pronounced horizontal lines as far round as the sculptural door trims. It incorporates harmoniously the hood above the standard Audi virtual cockpit whose sleek display stands visually free in the space, as well as the displays of the optional virtual exterior mirrors. These mirrors will be making their world premiere in the volume-production version of the Audi e-tron prototype, taking in-car digitization to a whole new level.”

They are referring to the optional cameras instead of mirrors which will be available in markets where it is legal for improved aerodynamics.

Audi also highlights the center console with its hand rest:

“Another eye-catching feature in the interior is the center tunnel console which rests on open sidewalls. The hand rest with integrated gear change lever appears to float above the console. Lightness and performance are fused into one. The entire driver’s area is focused squarely on the driver.”

Here’s a close up of the center console: 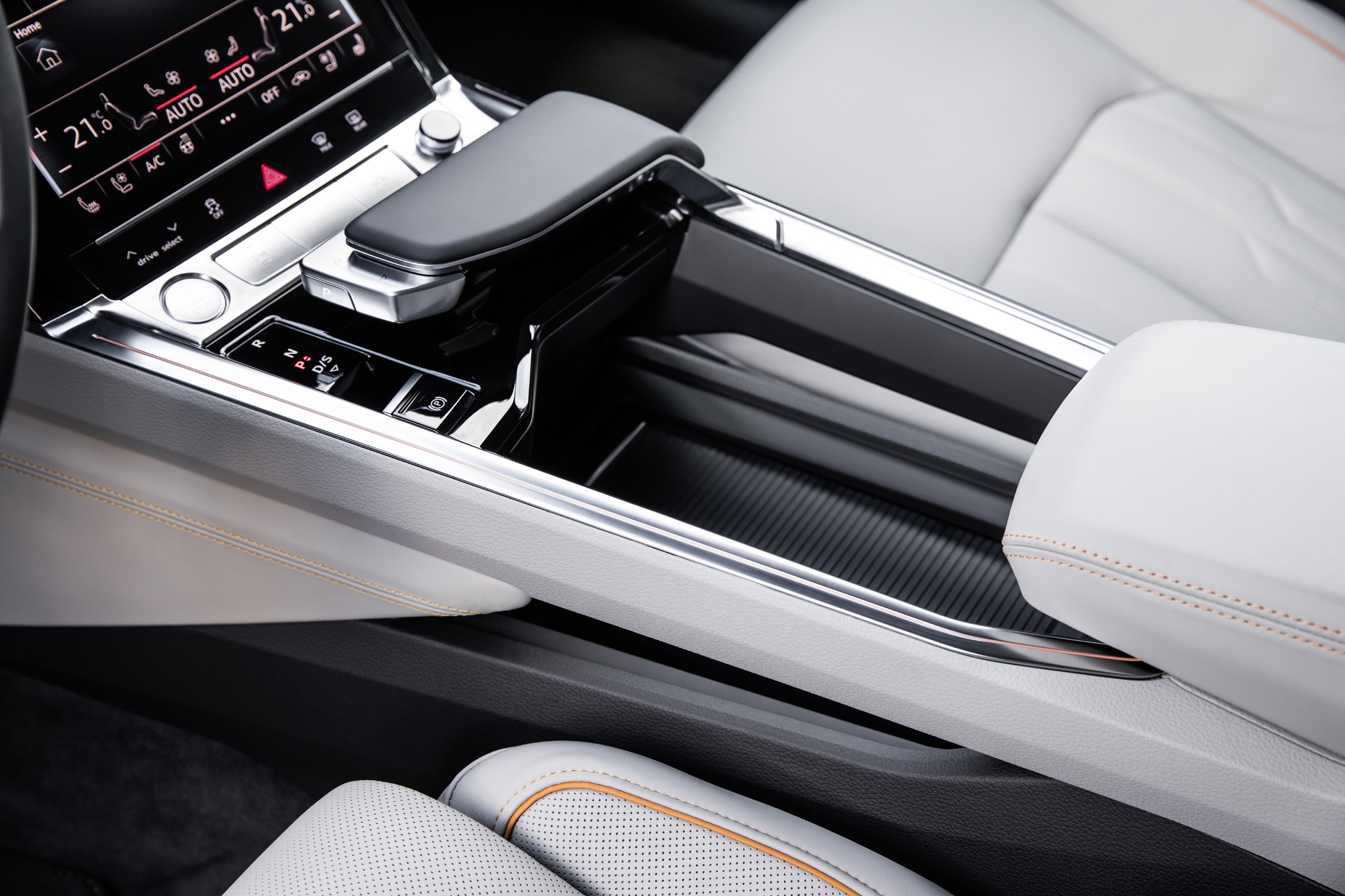 Those contrasting orange stitching seen at the bottom of the picture above are actually going to be offered as an option, which Audi claims is “taking cue from the high-voltage electrical system.”

The automaker also released images of a light interior version of the car:

Along with the design of the intetrior, Audi discussed the sound system of the e-tron quattro:

“Like a concert hall, the electric SUV also offers a pure sound experience, pampering its driver and the passengers as an option with the 3D sound of the Bang & Olufsen Premium Sound System. This system reproduces the music precisely how it was recorded – without any artificial effects. All thanks to 16 loudspeakers and an amplifier delivering up to 705 watts of power.”

We can see the speakers on some of the images released by Audi: 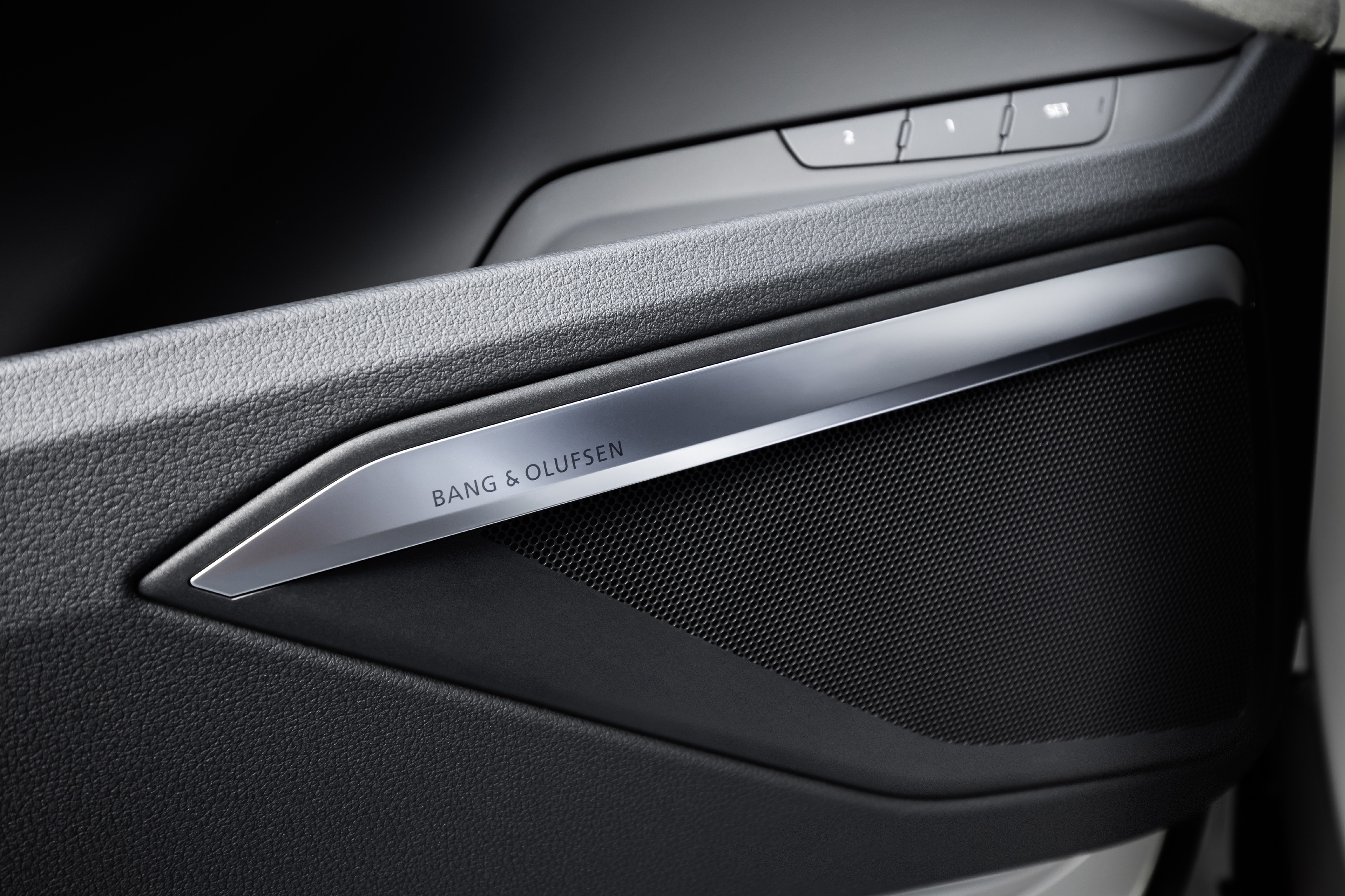 The Audi e-tron quattro has been in a position to be the first of a series of all-electric SUVs coming from German automakers.

Mercedes-Benz has the EQC coming to market next year and BMW has the electric vehicle of the X3, the BMW iX3, coming in 2020.

Audi is beating both these vehicles to market, but it is launching amidst a lot of controversy at the company.

The all-electric SUV is equipped with a 95 kWh battery pack, 3 electric motors for a total output of 320 kW and it is capable of DC fast-charging up to 150 kW.

The automaker hasn’t confirmed any performance specs yet, but it is expected to be quite quick with great torque vectoring due to its three independent motors.

It has also showcased the vehicle’s towing capability by pulling a trailer with their new electric race car in it and revealed the aero performance of the SUV with optional cameras instead of mirrors.

All those new details have been adding up leading to the unveiling of the production version, but we have wait a little longer to get all the details.