Skateboards aren’t just for the skatepark anymore. Believe it or not, electric versions are becoming increasingly popular forms of transportation, both for commuting and for pleasure riding.

With the recent boom in interest, the electric skateboard industry has been innovating quickly. Products include new electric shortboards and longboards from industry darling Boosted and more unique designs like the Linky electric longboard that can fold in half to fit in a backpack.

These DIY parts run the gambit of quality, from disposables to some quite decent parts.

But Hamburg-based Mellow Boards claims to have set a new standard for quality, employing German engineering to DIY electric skateboards. The result is a DIY kit that can be bolted to nearly any skateboard or longboard deck, creating a custom electric skateboard in minutes.

Unlike most electric skateboards that use an external motor with a belt drive connected to the wheels, Mellow uses hub motors, which hide the motor in the center of the wheel. 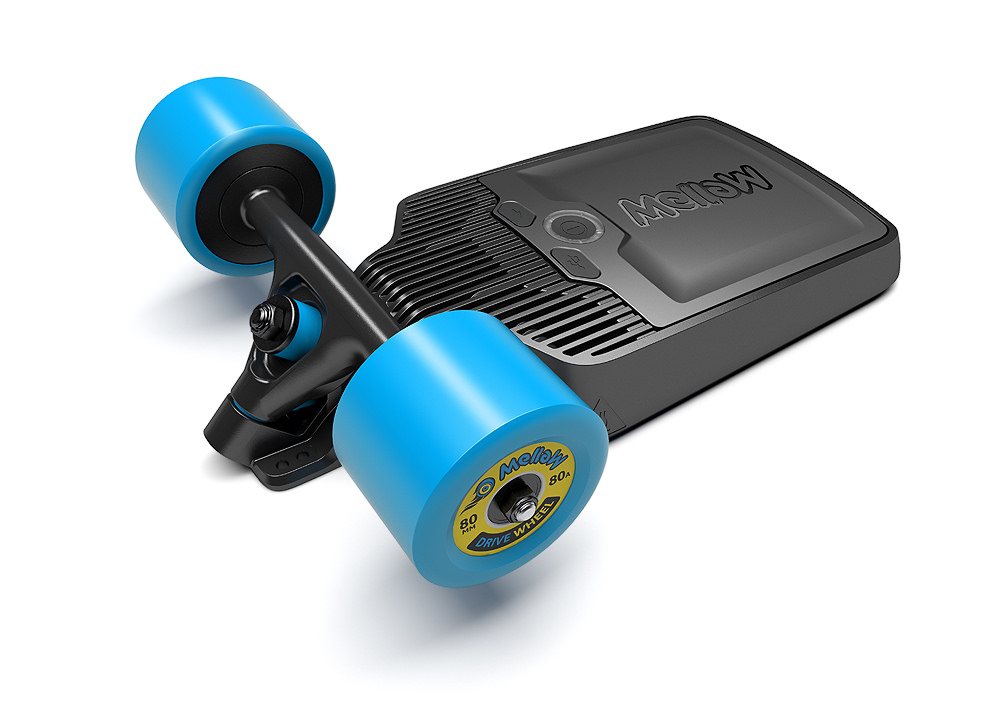 Hub motors help make electric skateboards quieter and less bulky. However, riders sometimes complain that they don’t absorb road imperfections as well as full polyurethane wheels due to the thinner wheel covers necessitated by the larger diameter of hub motors.

The bolt-on Mellow Drive kit allows riders to hit speeds as high as 40 km/h (25 mph) over distances up to 15 km (9 mi). The kit’s battery is swappable, so you can purchase extra batteries to keep on hand if you want to extend your range.

When Mellow first launched their DIY kit the Mellow Drive three years ago on Kickstarter (see? Legit things can and do come out of Kickstarter!) it introduced a new level of quality to the DIY electric skateboard industry — and a new price level as well. At over $2,000 for just the basic kit in the US, the fancy kit came with an equally fancy price.

Now the company is rolling out a new strategy to make their kit more affordable for the masses.

The Mellow Drive S, just announced yesterday, uses the same hardware as the original kit, but comes with a price of just €999 ($1,158).

To cut the price in half, Mellow had to cut some features out though.

In their place, the company has introduced what they are calling “Smart Kits”. Essentially, they are add-ons that can be purchased to unlock features.

The original Mellow Drive also had an “Endless Ride Mode” that worked like cruise control, which allowed you to push like a normal skateboard but then use the motor to match your pushing speed. That’s gone in the new base model of the Mellow Drive S. Want it back? That’ll be €299 ($347) please.

The Mellow Drive S also has a number of additional features not found in many boards, including IP65 water resistance, an auto-stop mode in case your feet ever leave the board, and an industry-leading 3 year warranty.

The new drive is available for pre-order now on Mellow’s website, with shipping starting later this fall.

I have to be honest: I’m not a big fan of subscription models and downloadable content (DLC) plans.

It seems like they are taking over everything. A lot of my favorite software that I used to own is now in a subscription model, which just feels like a way for companies to make more profit without offering me additional value. And DLC seems like the same thing, a chance to keep profiting after the initial transaction.

However, in the case of Mellow it appears that this new plan is not simply a cash grab.

Mellow has been known for producing a really high quality product, but most people never got the chance to try their kits because they were priced out. When you can buy a decent used car for the price of an electric skateboard kit (and not even a full skateboard yet, mind you), it’s hard to justify the cost for most people.

But with the DLC model, Mellow has been able to offer the same high-quality hardware for half the price, and then let the owner decide how many add-ons they’d like. For many people, 25 km/h (15.5 mph) is plenty. And for those with shorter commutes, 10 km (6 mi) might be enough.

Even if you combine all the add-ons together, the total price is still lower than the old kit.

The Mellow Drive S is of course still more expensive than a lot of other good electric skateboards, some of which are half the price and don’t require you to assemble a kit. But if you are looking for higher quality, a warranty that lasts for years and a company that is likely to still be around, this might be worth the money.