Internet connectivity has been an important feature of Tesla’s vehicles since the launch of the Model S in 2012.

The automaker uses the cellular connectivity in its vehicles to enable features like internet streaming, live traffic map and data, Autopilot map tiles and data, and push over-the-air software updates to get new features.

It is also standard in all of Tesla’s vehicles, but that’s about to change.

Tesla is introducing a new paid ‘premium connectivity’ package to support the in-car internet features of its growing fleet.

When Tesla first launched Model S in 2012, some owners were quite perplexed about the fact that the internet service came with the cars at no cost and there was no clear indication of when nor even if it was going to change.

In 2014, Tesla clarified that the internet connection would be for 4 years.

They wrote at the time:

“To further enhance the driver experience, new Model S customers will now receive free data connectivity and Internet radio for four years. As an added benefit to our existing Model S customers, the free four year period starts on January 1, 2014. To be fair to all, in rare cases a customer may be charged for extreme data use.”

Technically, owners of Tesla vehicles sold in 2014 should start to pay for the internet connectivity in their vehicles now, but it now looks like they will never have to pay for it.

In an email to its sales team this weekend, Tesla gave an update on the status of the internet connectivity in its fleet.

All current Tesla owners and those who order a Model S, Model X, or Model 3 before July 1st will never have to pay to maintain the current level of internet connectivity in their cars.

As the name entails, the ‘Standard Connectivity package’ will come at no additional charge.

A Tesla vehicle with this package will still have internet connectivity, but it will only be used for applications that require low amounts of data.

Specifically, we are talking about maps and navigation. Owners will still benefit from Tesla’s recently updated navigation system, but they will not have access to the satellite maps or the live traffic visualization.

The routing system will still make use of the live traffic data, but drivers won’t be able to see it on the center touchscreen like the green, orange, and red lines in this screenshot: 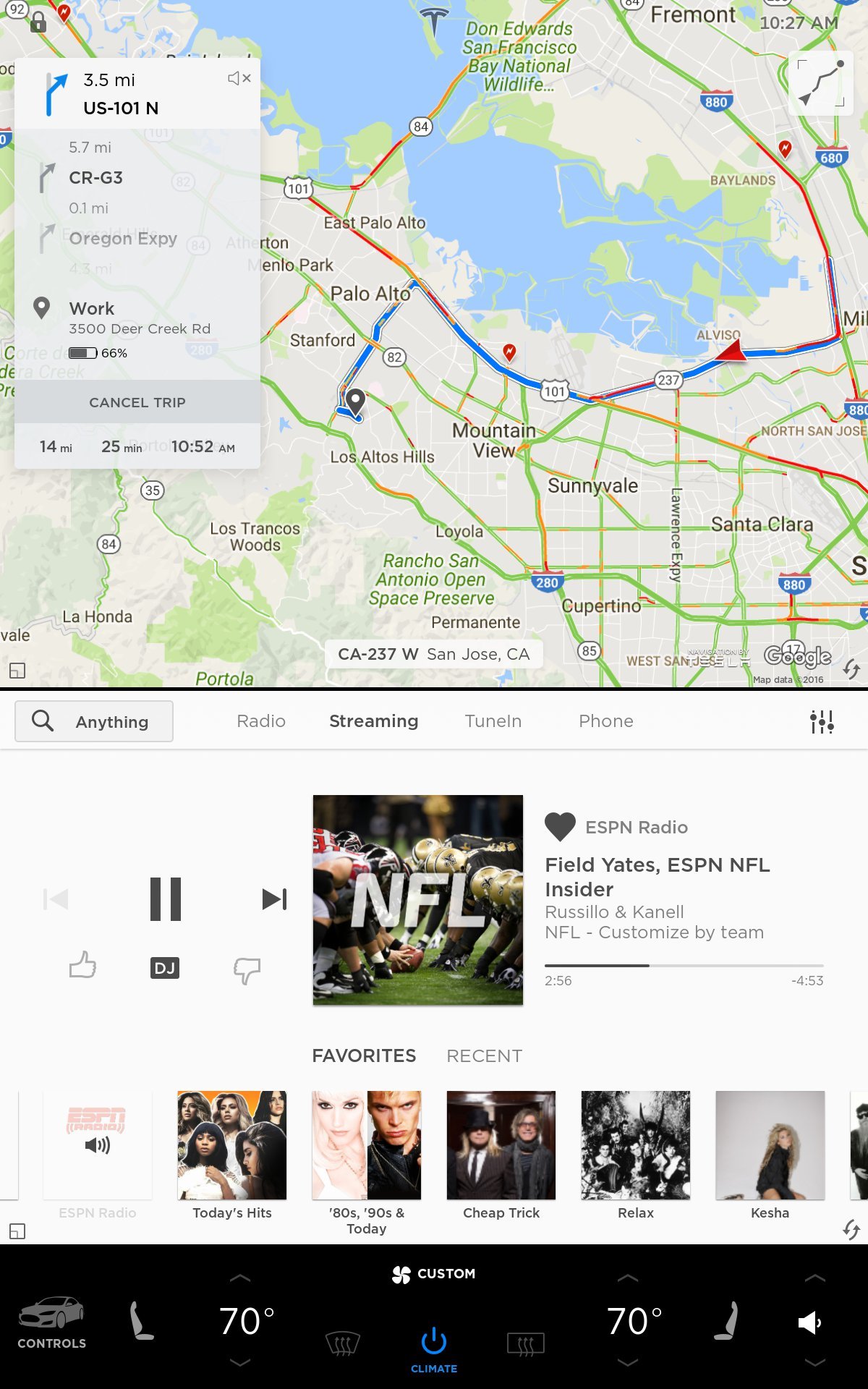 As for over-the-air software update, they will have to go through WiFi when vehicles are connected to a network. It’s a good thing that Tesla just released the WiFi capability to the Model 3 this week.

That said, Tesla can still push over-the-air updates through the cellular connection if it’s safety related.

That’s everything that will be standard on new cars ordered after July 1st.

Buyers will also have the option to go with the ‘Premium Connectivity package’. Tesla has not confirmed the price of the package yet, but they are aiming for something close to $100 per year.

Under this package, maps and navigation will still have the option to show satellite maps and live traffic visualization.

It will also include in-car streaming music and media, which has so far been included with apps like Slacker and Spotify. The internet browser will now be a part of the premium package along with over-the-air updates working both with WiFi and LTE connections.

Tesla also says that Model S and Model X vehicles ordered on or after July 1st will receive a year of free ‘Premium Connectivity package’. Model 3 vehicles with the premium interior, which is a $5,000 option and the only current Model 3 interior in production, will also get the same deal.

(The last paragraph updated to clarifiy that Model S and Model X get the first year free regardless of having the premium interior package or not.)

At the end of the year, they will get the option to purchase the package or revert to standard connectivity via the center touchscreen.

So this is basically a good news for all current Tesla owners who were expecting to have to pay for connectivity at some point and those who place a new order for a car before July 1st.

For everyone else, it’s a new charge that looks like it is going to cost about $100 per year – which isn’t crazy considering use. Folks with Mifis or unlimited phone connectivity can also opt to just use their phone as a Wifi bridge instead for streaming services it would appear.

It was to be expected. Covering all broadband costs for a relatively small fleet of cars made sense, but Tesla could now soon be adding 30,000 new cars to its fleet every month.

It’s starting to add up and now Tesla looks to be able to maintain its in-car connectivity in a financially sustainable way while the fleet is growing.

Tesla has been benefiting itself from its in-car connectivity since it enabled the automaker to gather critical data from its fleet and improve its products as well as develop features like Autopilot, which is not going to be affected by this change.

With this in mind, I think Tesla is being fair here because it still maintains standard connectivity in all cars for free in order to maintain those features, but it now starts charging for higher data-heavy features, like satellite view, music streaming, etc.

The automaker appears to have tried to maintain functionalities that don’t require a large amount of data. For example, drivers still have access to live Supercharger usage data even without the more advanced maps and navigation.

What do you think about Tesla’s new connectivity packages? Let us know in the comment section below.