As promised by Elon Musk earlier this week, Tesla is about to finally release its long-promised new navigation engine, which Musk called ‘light years ahead’ of the current system.

Now we take our first look at the new system.

It’s a complete overhaul of the system that Tesla has been working on for a while now. We have been reporting on unreleased iterations of it since last summer.

Back in July, we reported that Tesla has been working on revamping its maps and navigation system with its own maps using new open source modules from MapBox and Valhalla.

Clarification: the new navigation system is not necessarily linked to the 2018.12, Tesla is gradually enabling it as a beta version to some owners and monitoring the rollout.

Now the first available ‘beta’ version of the ‘Tesla Maps’ system is going to be pushed in the software update 2018.12 and Tesla promises faster routing and more accurate arrival times in the release notes:

Whether you’re on your daily commute or heading out to a new destination, you can rely on Navigation to give you the fastest route and provide more accurate estimated arrival times. It will route you around traffic jams and guide you through complex maneuvers when required.

If traffic conditions change and there’s an alternate route that will save time, Navigation will automatically reroute you. As with the previous system, you can control how aggressively Navigation does this: just indicate how much time an alternate route should save by adjusting the setting in CONTROLS > Settings > Apps > Maps > Navigation > RE-ROUTE IF IT SAVES MORE THAN

Navigation prevents you from missing turns by giving you a clearer view of upcoming maneuvers. More responsive guidance prepares you for complicated intersections or multi-lane interchanges. Each turn and highway exit that you should take is clearly labeled in blue, whereas cross-streets or highway exits that you will pass are labeled in black, to help you monitor your progress along the way. In addition, guidance and labels match real-world road and highway signs wherever possible.

As you get closer to a maneuver, the instrument panel view will zoom in to provide greater clarity and, if necessary, will highlight the lane (or lanes) that you should be using. This makes it easier to see how close you are to the turn, the cross streets that you’ll pass, and which direction to take.

Here’s the instrument panel view when getting “closer to a maneuver” that Tesla is talking about: 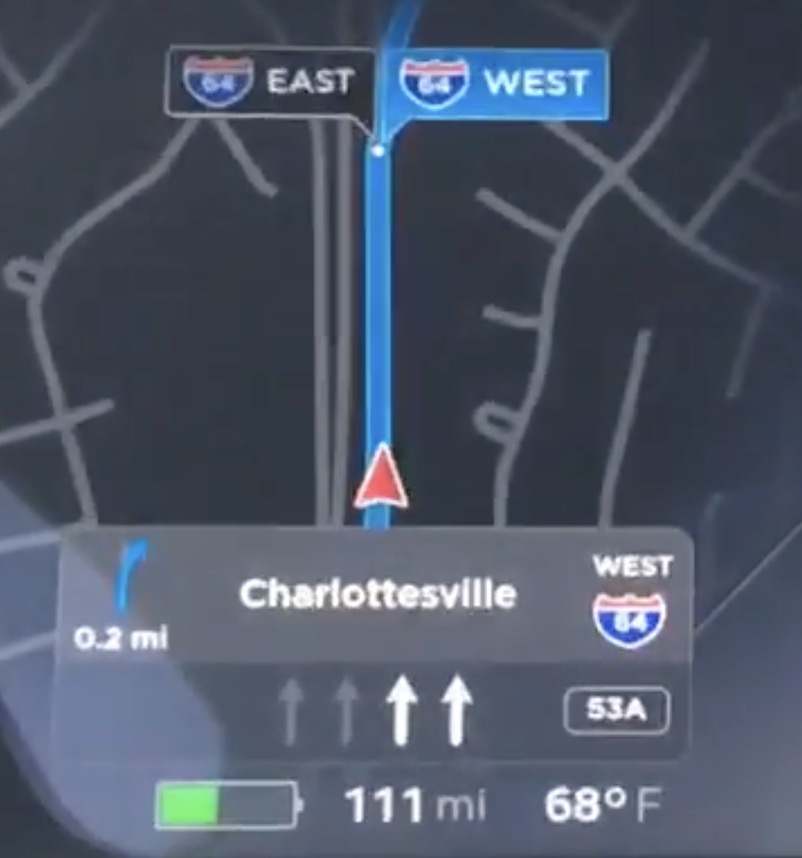 Model S owner known as ‘BigD0g’ got the new engine running in his Tesla and released quick videos of the instrument cluster, which features the biggest visual changes to the new navigation engine:

We have already seen some of those UI changes when friend of the site and Tesla hacker, verygreen was able to enable it in his car and gave us our first look at Tesla’s new map system.

But now, as more people get the update and test it, we should start to get a better idea of the performance in terms of routing efficiency, which was a bigger issue with the last system than the user interface.

The good news is that even if it doesn’t feature a big improvement to start with, it should quickly get better.

Musk said that with the old system, they were “stuck with legacy 3rd party black box code and stale data”. Now with the new system based on open source modules, they will be able to improve on it over time.

When you get the update, which is going to be sent out in batches this weekend and could take a while before everyone gets it, let us know what you think.

Rad Power Bikes releases teaser image of new e-bike. Can you tell what it is?