Tesla is currently pushing for Model 3 production to reach 5,000 units by the end of the quarter.

CEO Elon Musk gave a status update to employees. He said that all parts of the production process are now operating at over 3,500 units per week and he will stay “almost 24/7” at the Fremont factory to help fix the last few bottlenecks to bring the production to ~700 units per day.

The update comes about a week after Tesla came out of the Model 3 production shutdown and Musk confirmed at the shareholder meeting that they are now sustaining a production of 500 units per day and a new production line is coming up.

In a new email to employees, Musk wrote this week:

“It’s getting very exciting! All parts of the Model 3 production system are now above 500 and some are almost at 700 cars already. Congratulations to all on making so much progress!”

In order to get to 700 cars per day, which would bring them to almost 5,000 cars per week, Musk identified a few bottlenecks.

The CEO said that “paint shop output, GA3, bringing up the new GA4, End of Line and Module Zone 4 at Giga” all need “radical improvements.”

At the shareholder meeting earlier this month, Musk said that they have started building up a new line

Over the past few days, a giant tent has been growing on the north side of the Fremont factory property (picture via BuildingTesla and planet.com): 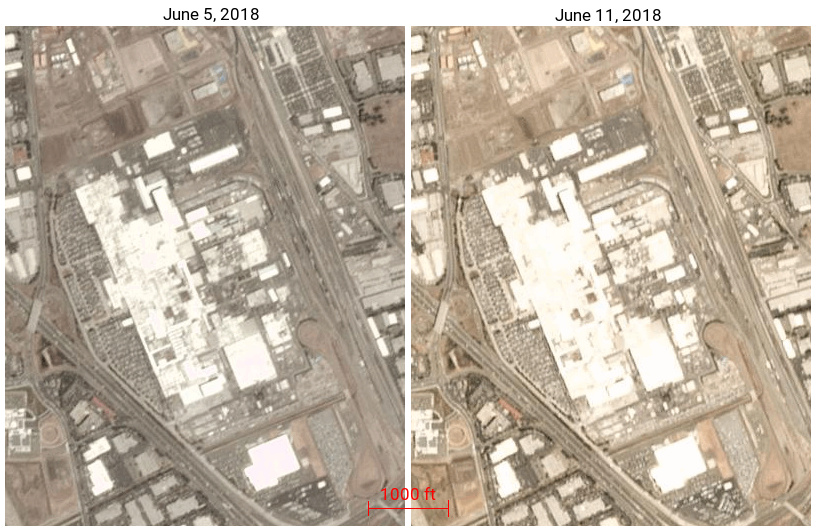 It reportedly serves as a temporary building to support the new Model 3 assembly line.

Musk has also apparently assigned some top executives to help fix the trouble areas of the production process.

The CEO invited anyone in the company who “feel can help out in any of those areas” to reach out to those execs and others in charge of the previously mentioned bottlenecks areas.

“I will be at our Fremont factory almost 24/7 for the next several days checking in with those groups to make sure they have as many resources as they can handle.”

In April, Musk said that he is back to sleeping on the Tesla factory floor to oversee Model 3 production when they were trying to increase production over 2,000 units per week.

Over the following few weeks, they got it to over 3,500 units per week, but it now sounds like Musk wants to supervise another push that they hope will lead to Tesla reaching a production rate of 5,000 units per week by the end of the month.

I felt like over the last few weeks, Musk showed a lot of confidence in achieving a production rate of 5,000 units per week by the end of the quarter.

Though it now sounds like there’s still a big hurdle to go through before they get there if there’s a need for “radical improvements” in some very important parts of the production process, like the general assembly, end of the line, and battery module production.

That said, it sounds like they are bringing out the big guns to work on those issues.

The 5,000 units per week goal has already been delayed by about 6 months. Tesla really needs to achieve it now in order to reach positive cash flow during the second half of the year and start working through its backlog of reservations faster.

I think it still looks good for them to achieve the goal in time, but I am a little less optimistic than last week as the deadline grows closer and it appears that they still have a lot of work ahead.