We have yet to see the results of third-party crash tests for the Tesla Model 3, but some owner reports of accidents are giving some insights into the safety performance of the new electric vehicle.

A Model 3 was recently rear-ended at high-speed and the owner says that it ‘performed miraculously’ – leaving his family of four safe.

The early Model 3 owner known as ‘Anatari’ shared the story of the crash and the picture of the aftermath above on the Tesla Motors Club forum:

Was cruising along the i-90 tunnel in Seattle, WA on mercer island with my wife and 2 kids, when I hear some vehicles approach at high speed from behind. Then suddenly I hear a screeching sound from a car breaking hard, and then a car slams into my rear end – hard. I was going 65, so that vehicle must have been going significantly faster. From there I lose control of the car, and the car spins out of control, hitting the freeway divider wall all the way on the other side of the freeway 4 lanes across, and then bouncing back all the way back to the other side of the freeway and hitting that wall before coming to a stop.

He elaborated on the safety performance of the Model 3:

Thankfully the model 3 performed miraculously, crumple zones compressed, airbags deployed, no fire after the accident, and no one in my family seems to be seriously injured.

Someone claimed to have been a witness to the accident and said that it was caused by a Camaro and BMW racing on the public road: 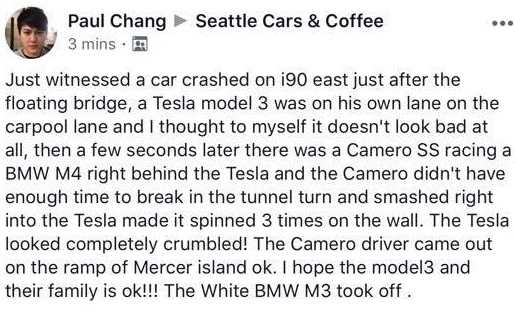 The owner said yesterday that he would ask Tesla for video from the Autopilot camera in order to try to confirm it.

While Tesla’s Autopilot cameras do save images in the event of a crash, it’s not something that is currently available to owners, but Tesla is reportedly working on a dashcam feature using its Autopilot cameras.

Considering all the attention around Tesla crashes right now is on whether or not Autopilot is responsible, I think it’s fair to highlight the safety performance of the crash that has nothing to do with that.

Last year, Tesla said in their shareholder’s letter that they had positive results from early Model 3 crash tests:

Initial crash test results have been positive, and all Model 3-related sourcing is on plan to support the start of production in July.

Over the past few months, we have seen the aftermath of a few Model 3 crashes, which gave us some idea of the safety of the vehicle in a completely uncontrolled environment, but official third-party testing should be much more revealing.

They should be coming soon since IIHS’ first Tesla Model 3 safety test results were released earlier this month and crash results are expected to be next.