Just over a year and a half after Canada’s Electra Meccanica first unveiled their single seat EV, deliveries of the SOLO have now begun in the US after recently receiving certification for sale in the country.

The SOLO is a three wheeled EV that feels like a luxury electric car, but is technically registered as a motorcycle.

As the first US-delivered SOLO made its way to Los Angeles, California, it was met by Washington state SOLO representative and former IndyCar driver Dominic Dobson. According to Dobson:

Driving the SOLO today reminded me of my days driving formula cars. It was so quick and nimble it just made me giggle and I thoroughly enjoyed it. I think people who enjoy driving are going to love these fantastic little vehicles!

CEO of Electra Meccanica, Jerry Kroll, touted the achievement of receiving national certification in the US and the opportunities that this milestone would open for the company:

This achievement is indicative of our commitment to excellent quality and safety. To be federally certified in the United States now opens the SOLO to the biggest electric vehicle market in North America.

Tadpole trikes, or three wheeled vehicles with two wheels in the front, are increasingly sought after by EV designers due to their improved stability and decreased development/regulatory hurdles. And since the SOLO is legally considered to be a motorcycle, drivers can take advantage of most carpool lanes as well, making them even more enticing to commuters.

The 17.3 kWh battery has been slightly increased from the previous 16 kWh battery that the Solo sported when it began production last year, and should be enough for 100 miles (160 km) of range.

That larger battery pack can be recharged in either 3 or 6 hours from a 220V or 110V outlet, and can take advantage of level 2 chargers. 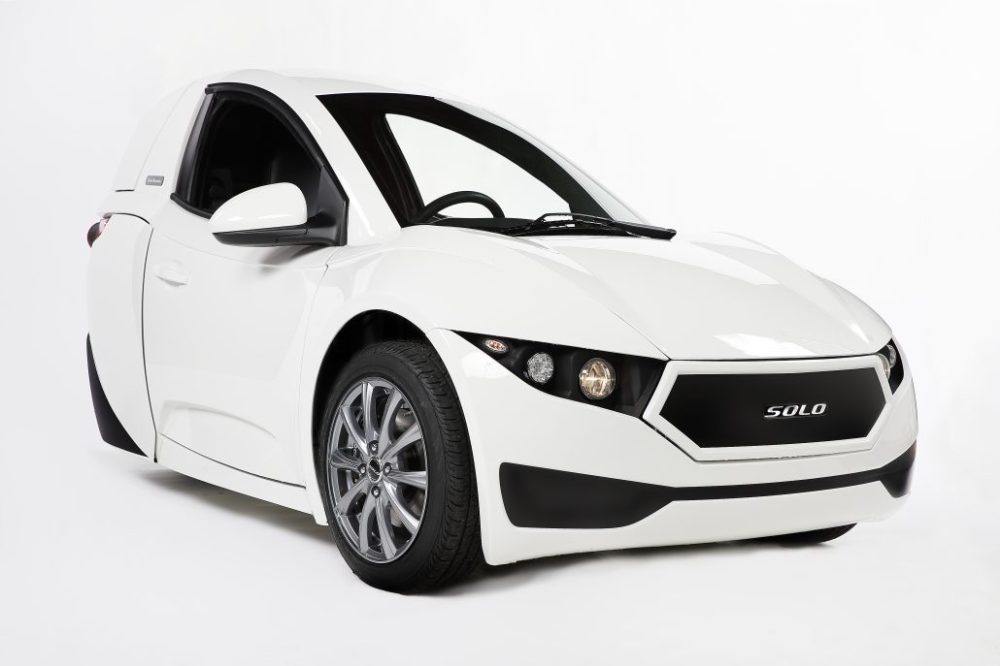 Focusing on the creature comforts of more conventional luxury cars, the SOLO includes many features not normally found in motorcycles, including power windows, heated seats, over 10 cubic feet (285 L) of cargo space, and air conditioning.

While today marks just the first US delivery of a SOLO to a lucky customer in Los Angeles, Electric Meccanica has entered into an agreement with China-based motorcycle manufacturer Zongshen Industrial Group to produce 75,000 SOLO all-electric vehicles by 2020. With increased production ramping up, you could soon be spotting more SOLOs on your local streets.

The SOLO, and most enclosed three wheeled cars for that matter, are interesting options for those that want some of the convenience and cost of a motorcycle but prefer the safety and year-round practicality of an enclosed vehicle.

While it might feel like a downgrade in some respects to those more familiar with four-wheeled EVs, the SOLO would certainly be an upgrade in usability and features for many motorcycle riders.

While $15,000 is by no means cheap, the price is actually competitive compared to other similar offerings in the EV market. The Corbin Sparrow, which later became the Meyers NmG, both cost twice as much as the SOLO and yet they had only half the range. A similarly spec’d Zero S ZF7.2 or ZF13.0 electric motorcycle costs between $11,000-$14,000, yet isn’t quite as utilitarian when it comes to things like carrying groceries or commuting in anything but nice weather. And Sondors is attempting to bring a $10,000 three-wheeled EV to market by 2019 via crowdfunding, but it is too soon to determine if they will be able to meet their price or delivery estimates.

A single seat EV isn’t going to fit everyone’s lifestyle, but with many people commuting alone in their cars every day, it could make sense for a significant portion of the population. If you’re already worrying how you’ll pick up a date in a single seater, then don’t worry. Electra Meccanica has you covered with the Tofino, a stylish 125 mph (200 km/h) roadster EV already in the works and slated for release next year.