The argument that electric vehicles are just as polluting as gas-powered vehicles because they consume electricity produced from polluting sources like coal plants has been debunked on many occasions at this point.

It’s now not only untrue, but electric vehicles are also rapidly becoming increasingly greener thanks to a cleaner electric grid.

In the US, the latest study shows that on average, an EV driving on electricity is equivalent to a conventional (nonexistent) gasoline car that gets 80 MPG.

The study is coming from the Union of Concerned Scientists‘ (UCS) updated state-by-state look at emission generation from electricity to account for the average electric car’s equivalent mpg on the electric grid.

“Based on data on power plant emissions released in February 2018, driving on electricity is cleaner than gasoline for most drivers in the US. Seventy-five percent of people now live in places where driving on electricity is cleaner than a 50 MPG gasoline car. And based on where people have already bought EVs, electric vehicles now have greenhouse gas emissions equal to an 80 MPG car, much lower than any gasoline-only car available.”

Here’s the evolution of their study per state from 2009 to 2016 based on the most recent data:

During that timeline, it’s clear that the switch from coal to natural gas in many regions had an impact, but it is also clear that the regions with a higher mix of renewable energy, like California, and where hydroelectricity is more popular, like the northeast, are doing a lot better than any other parts of the US.

The good news is that keeps becoming truer every year as more renewable energy is added to the mix.

And that’s just for your average electric vehicle. UCS also added a new map that looks into the impact of someone driving a new ultra-efficient electric vehicle like the Hyundai Ioniq Electric and the Tesla Model 3, which top the EPA’s list of most efficient EVs at 136 MPGe and 126 MPGe respectively.

According to the study, it doesn’t matter where you are getting your electricity in the US with one of those cars, you are going to be much cleaner than anything else on the road: 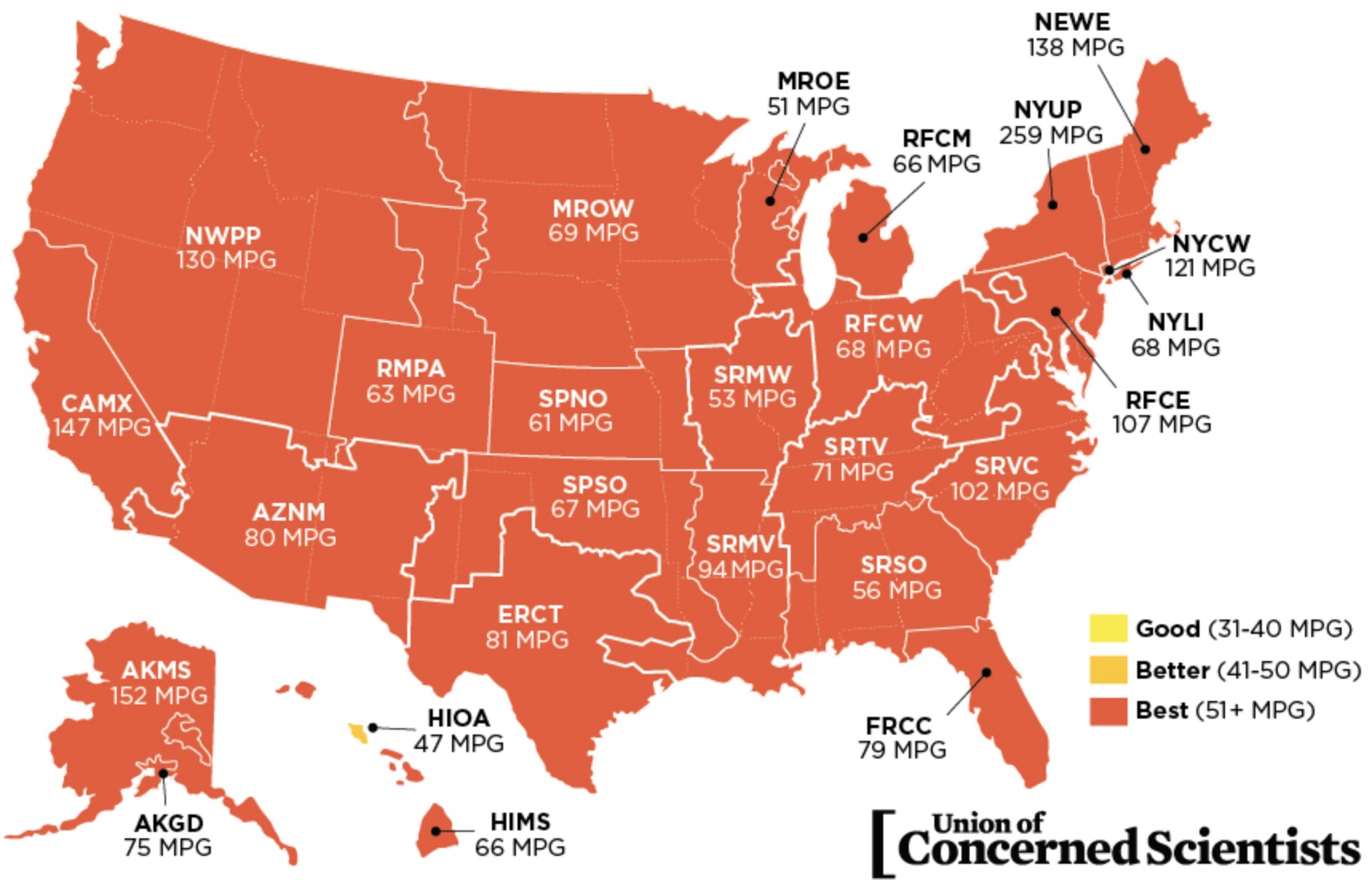 This is exciting stuff because you know that the trend is continuing with more renewable energy being added to the mix.

On top of that, the average efficiency of the EV fleet in the US will inevitably improve this year with more Model 3 deliveries.

Then if Hyundai would start making more Ioniq Electric, which they claim to plan, it would quickly get a lot better.

Either way, it’s fun to see that EVs are already having an impact on the US’ current grid and that impact is improving every year.