Audi is expected to unveil the production version of its first all-electric vehicle built to be electric from the ground up, the Audi e-tron quattro, tomorrow in Geneva.

In the meantime, they brought reportedly over 200 prototypes of the all-electric vehicle to the city and they want people to chase them around.

Audi says that the e-tron quattro has “310 miles of range” on a 95 kWh battery pack, but Audi usually uses NEDC ratings for electric vehicle range. Therefore, real-world range or the EPA estimate should be closer to ~275 miles.

The all-electric SUV is also equipped with 3 electric motors for a total output of 320 kW and it is capable of DC fast-charging up to 150 kW.

For now, the German automaker has only unveiled a still camouflaged version of the vehicle on Facebook.

You can watch Jens van Eikels, Director of the e-tron program, ride in one of the prototypes here:

Speaking of the camouflage, I’ve never seen an automaker so proud of a camouflage design before that they even produced a blog post about it.

The car’s designer even suggested that they could offer it as an option when buying the vehicle.

Today and tomorrow, they will be driving the vehicle around Geneva and Audi is encouraging people in the city for the auto show to follow the car around and send them pictures: 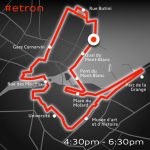 Audi already opened reservations with deposits for the new e-tron quattro, as well as the e-tron sportback which is expected a year later, in several markets.

But we don’t know yet the price of the vehicle or the availability in each market. We should have a much better idea by the end of the week.

We already have a good idea of the specs and design of the vehicle from Audi’s previous announcements, but the price is the biggest information that we will be looking for tomorrow.

They have been saying that the e-tron quattro is between the Audi Q5 and Audi Q7 in terms of size and those vehicles have starting MSRPs of $41,000 and $49,000. If the e-tron quattro is offered around the same price before incentives, it would shake up the market, but it’s unclear at this point

There were similar expectations for Jaguar’s I-Pace, but the vehicle turned out to be a little more expensive as we learned last week.

It will be interesting to see Audi’s approach to positioning and marketing the quattro on the market and see if they will try to pin it against other electric SUVs, like Jaguar did with the I-Pace against the Model X, or instead compare the vehicle against the wider gas-powered SUV market.