We have seen a few sightings of Tesla Semi prototypes lately, but they were mostly driving on streets around Telsa’s facilities in Palo Alto.

Now, the vehicle was spotted cruising on the highway where it could soon have its first official freight route.

During a presentation about the new Tesla Semi at the annual conference of Transport and Logistics in the Netherlands last year, Tesla VP of Truck programs Jerome Guillen confirmed that the company will be using their electric semi trucks for freight transport between its facilities in California and Gigafactory 1 in Nevada:

Previously, Tesla CEO Elon Musk referred to the automaker’s logistic costs to carry cargo between the two locations as “gigantic”. He even suggested that they are considering building a hyperloop system for cargo with his Boring Company startup in order to address the issue.

But Tesla Semi is a more realistic short-term solution and it looks like Tesla might have already started testing the route as Vlad Fed spotted the electric truck prototype around Sacramento on the highway leading to Gigafactory 1:

It just so happens that the route between the two factories is almost the perfect example of the capabilities of the semi truck that Tesla claimed during its unveiling last year.

The most important claim was a range of 500 miles for a capacity to bring a full load to a destination 250 miles away, which represents 80% of the market according to Tesla, and then bring a load back to the original location on the same charge.

According to Google Maps, the shortest route between Tesla Fremont and Tesla Gigafactory 1 is exactly 258 miles: 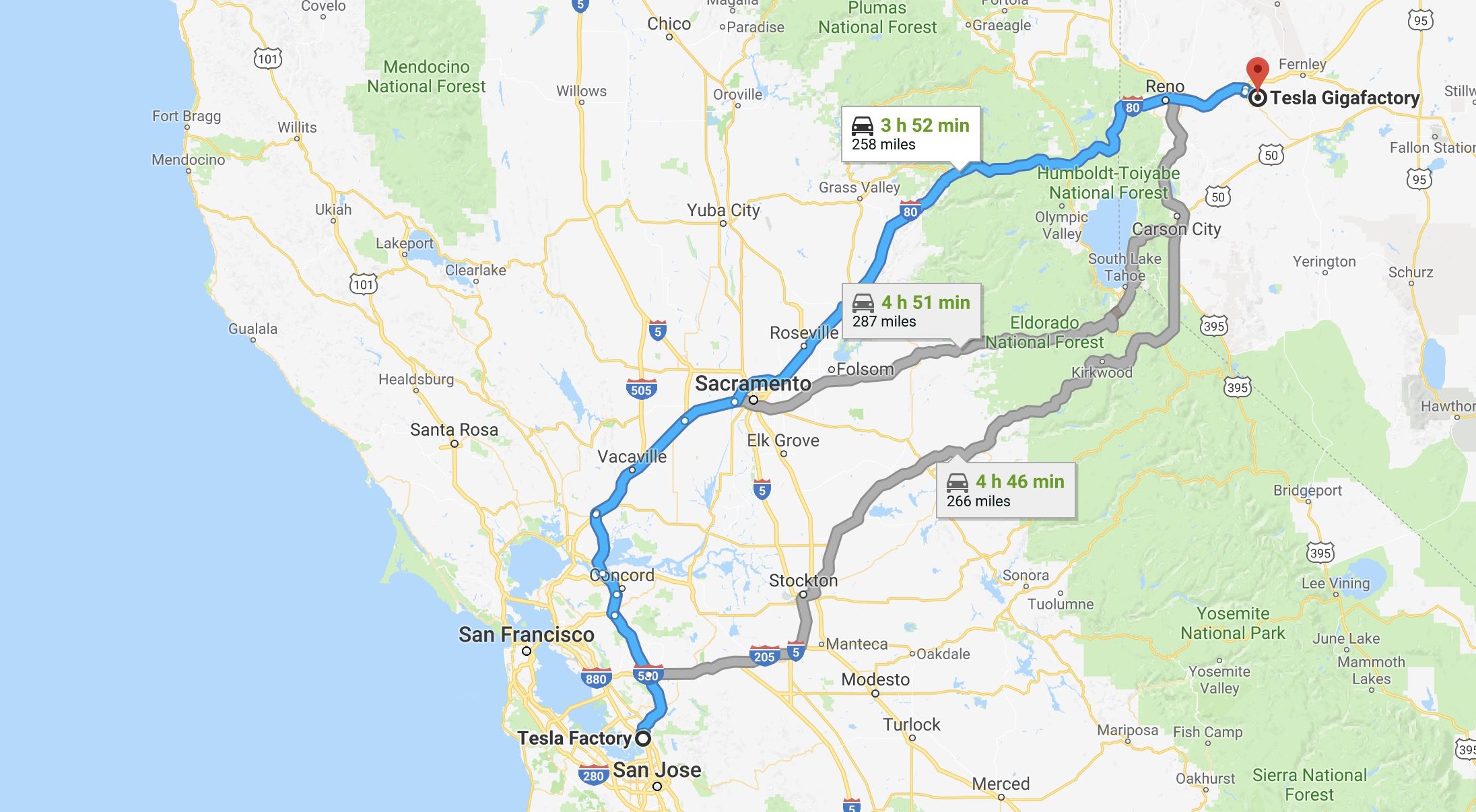 Now, of course, Tesla will likely have charging infrastructure installed at each location, which would result in Tesla Semi trucks not having to go both ways on a single charge, but it would still be a good demonstration of the vehicle’s capacity.

Tesla also requested permission to test electric truck prototypes for platooning and self-driving in Nevada and California last year and that route could also be used for that.

At the Tesla Semi unveiling event last year, Tesla claimed that combining their electric truck and platooning technology would reduce the cost of operation to $0.85 per miles with a three-truck convoy.

If all Tesla is claiming about their electric truck is true, they would be mad not to take advantage of it themselves.

Many people are still skeptical of Tesla’s claim of a range of 500 miles with a full load and therefore, it would be nice to start seeing some sightings of range tests with a trailer.

But in the meantime, it’s fun seeing this potentially revolutionary truck cruising on the highway remarkably quietly.