While orders for the Tesla Semi electric truck are piling up, Tesla’s VP of Truck programs, Jerome Guillen, confirmed that Tesla will be its own first customer and that it will use the trucks to carry cargo between its factory in Fremont, California and its battery factory in Nevada.

Tesla CEO Elon Musk previously referred to the automaker’s logistic costs to carry cargo between the two locations as “gigantic”.

He even suggested that they are considering building a hyperloop system for cargo with his Boring Company startup in order to address the issue.

During a presentation about the new Tesla Semi at the annual conference of Transport and Logistics in the Netherlands today, Tesla VP of Truck programs Jerome Guillen confirmed that they will first address the problem by using their electric semi trucks.

It just so happens that the route between the two factories is almost the perfect example of the capabilities of the semi truck that Tesla claimed during its presentation last week.

The most important claim was a range of 500 miles for a capacity to bring a full load to a destination 250 miles away, which represents 80% of the market according to Tesla, and then bring a load back to the original location on the same charge.

According to Google Maps, the shortest route between Tesla Fremont and Tesla Gigafactory 1 is exactly 258 miles: 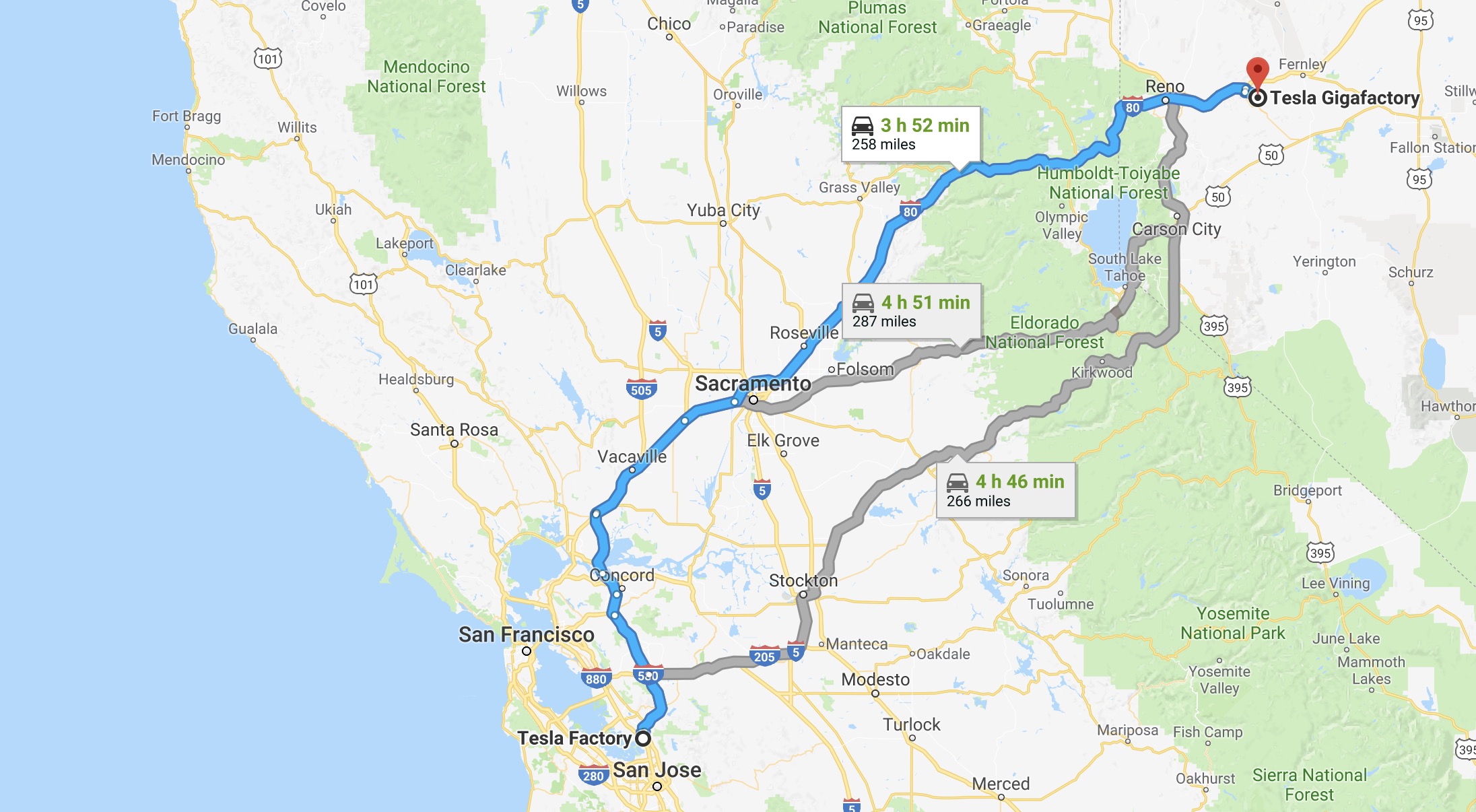 It should be an excellent showcase of the capabilities of the Tesla Semi and if Tesla truly achieves the cost of operation savings that they claimed, they should achieve some important logistic cost savings.

Interestingly, Tesla requested permission to test electric truck prototypes for platooning and self-driving in Nevada and California earlier this year.

At the Tesla Semi unveiling last week, Tesla confirmed that they had a platooning technology to reduce the cost of operation to $0.85 per miles with a three-truck convoy:

It wouldn’t be surprising that they requested to test the vehicles in those two states exactly for that route that Guillen now confirms will be one of the first routes to see Tesla’s new semi trucks.

The landscape that they used to showcase the convoy technology in a video presentation even looks like the terrain around the route between Fremont and Reno/Sparks, where Tesla’s Gigafactory 1 is located:

We already speculated that Tesla is likely going to be its best own customer for the program. In California, Tesla operates its own truck fleet of about 100 trucks, according to public documents. It would make sense for the company to update its fleet with its own trucks.