A few days ago, we got a tip that a test mule for the Tesla Semi program was spotted on video (embedded below) in the wild.

While it’s not confirmed if it’s indeed a Tesla test vehicle, it looks likely and regardless, the truck does appear to be electric, which is interesting on its own.

Last week, we reported that an actual Tesla Semi prototype appeared to have been spotted at “an undisclosed place in California where they test Tesla vehicles.”

While Tesla CEO Elon Musk tried to cast some doubts about the fact that it is indeed a Tesla Semi when announcing that the unveiling has been delayed by a few weeks, we were later told by someone familiar with the program that it is indeed the truck that Tesla has been showing to potential customers.

But Tesla has also been testing its all-electric truck powertrain with a test mule, something Musk confirmed earlier this year.

If we look closely at the picture of the prototype, we can see a truck in the back that could be that test mule: 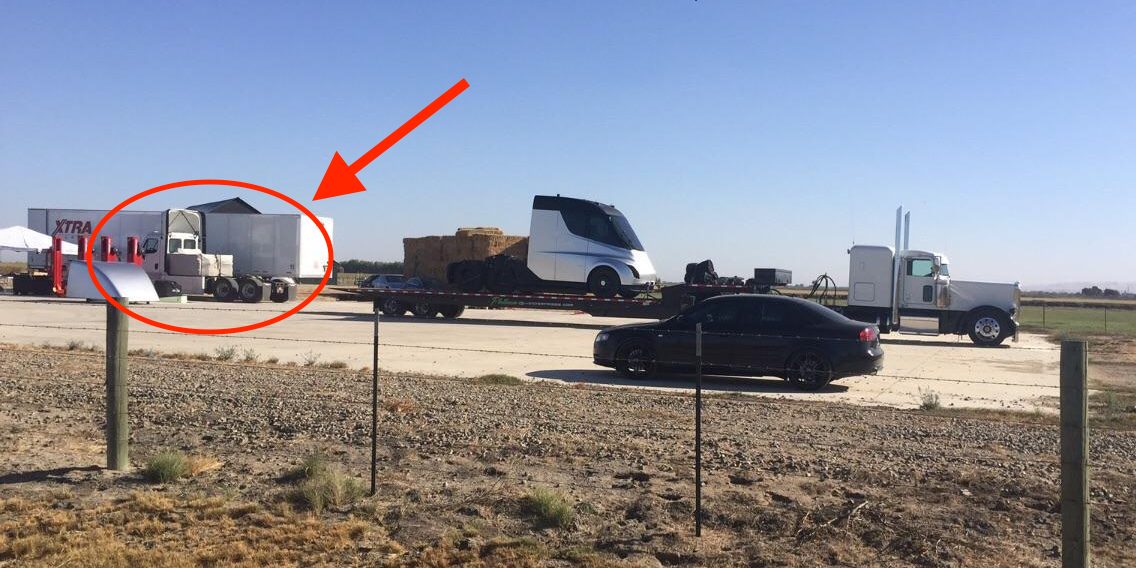 Now that truck looks awfully similar to the one spotted in the previously mentioned video.

It is seen here accelerating rather quickly from a standstill with a trailer attached:

I personally can’t hear an engine. There also doesn’t seem to be any visible exhaust pipe and the vehicle accelerated really quickly for a truck of this size.  The video was also posted to Reddit where the consensus seems to be that it’s definitely an electric truck and likely a test mule for the Tesla Semi.

Other companies have been testing electric trucks, like Cummins and Daimler, but the trucks that we have seen so far don’t look like this test mule.

Furthermore, a source also familiar with the vehicle shown to potential customers also told Electrek that a Cascadia was used for the body of the test mule. While it’s difficult to say from this angle, it looks like it could be a Cascadia truck.

Again, we can’t confirm it without any doubt, but it looks like that it is the first sighting of an actual working all-electric truck, albeit a test mule, made by Tesla.

Update: here’s a closer look at the same vehicle and you can more easily hear (or not hear) the powertrain: