Tesla’s 100MW/ 129MWh Powerpack project in South Australia, the largest in the world for now, has been demonstrating its capacity over the last few weeks since going into operation last month.

But now the system is showing its potential to be highly profitable by making an estimated $1 million AUD (~$800,000 USD) in just a few days.

The Powerpack system built by Tesla and operated by Neoen as part of their nearby wind farm is used on two different levels.

Neoen has access to about 30 MW/ 90 MWh of the capacity to trade on the wholesale market, while the government has access to the rest to stabilize the grid.

The battery demonstrated its capacity for the latter by reacting to a crashed coal plants in milliseconds last month.

But this month, it’s Neoen that is making full use of its Powerpack capacity thanks in part to the volatile Australian energy market and warm temperatures.

The Powerpack system is able to switch from charging to discharging in a fraction of a second, which allows Neoen to take advantage in the large swings in energy prices in the country – especially during high demand periods.

Last week, Tesla’s massive battery was paid up to $1000/MWh to charge itself and now it could have cleared up to $1 million in the last few days. Australia’s Renew Economy reports:

“Another view of this data is presented below, showing the actual price achieved during the buying (charging) and selling (generation). It’s hard to be sure, but it might have made around $1 million over the two days from the wholesale market.” 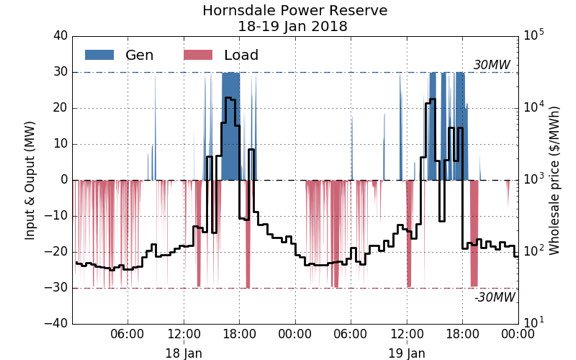 What we are seeing here is the Powerpack system enabling Neoen to sell electricity at up to $14,000 AUD per MWh and charging itself at almost no cost during overproduction.

The grid service side of the battery system was also put to use last week when a coal generator failed out of its frequency and the Powerpacks helped out with a short burst of power to normalize the grid: 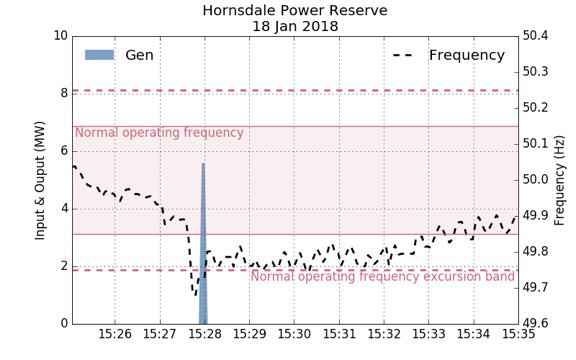 Renew Economy‘s Giles Parkinson referred to this as only “showboating” and thinks we could be witnessing only a small part of the system’s real capacity as they keep testing it over the next few months.

Showboating or not, it’s impressing enough people that it quite apparently created a snowball effect for Tesla’s Powerpacks.

Now, this incredible use of the system is really specific to the Australian energy market and there aren’t that many markets out there where it could be so valuable, but they can certainly adapt it at different scales and for different uses.

But in Australia alone, it resulted in several more projects in the works. Tesla was chosen to build another big battery in Australia earlier this month and the company is also working with Neoen in the country for potentially even larger battery projects.

We expect that we are only seeing the tip of the iceberg right now.