We have been talking a lot about a Tesla station wagon lately since not one but two aftermarket modification companies are working on it.

Now one of those two companies has completed the very first working Model S station wagon.

Our last report was on RemetzCar, the maker of the Model S hearse, announcing that they are working on a Model S wagon, but Qwest is actually the company that first completed their working prototype.

Qwest was founded by a bunch of engineers and automotive designers based in Norfolk, UK.

We previously reported on their progress working on a Model S P90D, but they have now announced that they completed the modifications of the vehicle.

Tesla’s vehicles are highly connected with sensors and it’s easy to end up with error alerts even with fairly simple modifications, but Qwest says that they checked with Tesla in order to know how to proceed to maintain support for the vehicle after the modifications, especially with future software updates.

Yesterday, they shared this video and claimed that the vehicle is now fully working:

And finally… the bit you've all been waiting for. A few of you doubted it was even real..captured earlier today the moment that @TeslaTed very own P90D-SB connected to the #ElonMusk network became visable and moved #theteslashootingbrake #british @BBC_TopGear @FullyChargedShw pic.twitter.com/ZRCiEAclUR

The company shared a few more images on Twitter: 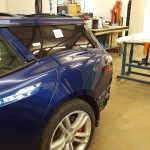 They created the new parts with carbon fiber to limit the added weight for the bigger rear.

I don’t know about you, but I am very impressed. I rarely like the aftermarket Tesla modifications, but this one turned out great and it’s also practical if you are looking for a little more cargo space.

Cargo aside, the design is pleasing if you don’t mind the shooting brake-look. As it turns out, the Model S’ design translates well into a sport wagon. We already have seen several Tesla Model S wagon renderings that were well-received, but it’s easy to make a rendering look good.

Now we see an actual working vehicle and it holds up to the renderings.

Wagons, or estate cars, or shooting-brakes, are very popular in Europe, especially in markets like the UK and Germany, but there’s currently none with an all-electric powertrain.

Despite being an aftermarket upgrade, it could technically be considered the very first one and now that they developed all the parts and the molds, Qwest could potentially bring the cost of the modification down and offer it to other Model S owners.