Continental AG, the large German automotive OEM company today previewed some new electric car charging technology that they plan to showcase at CES in Las Vegas next month. The announcements amount to two different parts of the EV charging infrastructure that would be OEM-ed into Electric vehicles by automakers:

1. Continental is announcing a wireless inductive charging pad. It will have sensors which will direct the driver via micro-navigation system to park the car over the exact spot where the vehicle can get the fastest charge.

Continental says the technology can produce 1 mile of range (assume ~250Wh) in 90 seconds which is about 40 miles/hour of range or the equivalent of about 10kW 40A/250 Volt AC level 2 chargers.  Subsequent versions of this system coupled with autonomous driving systems will allow positioning without driver intervention. 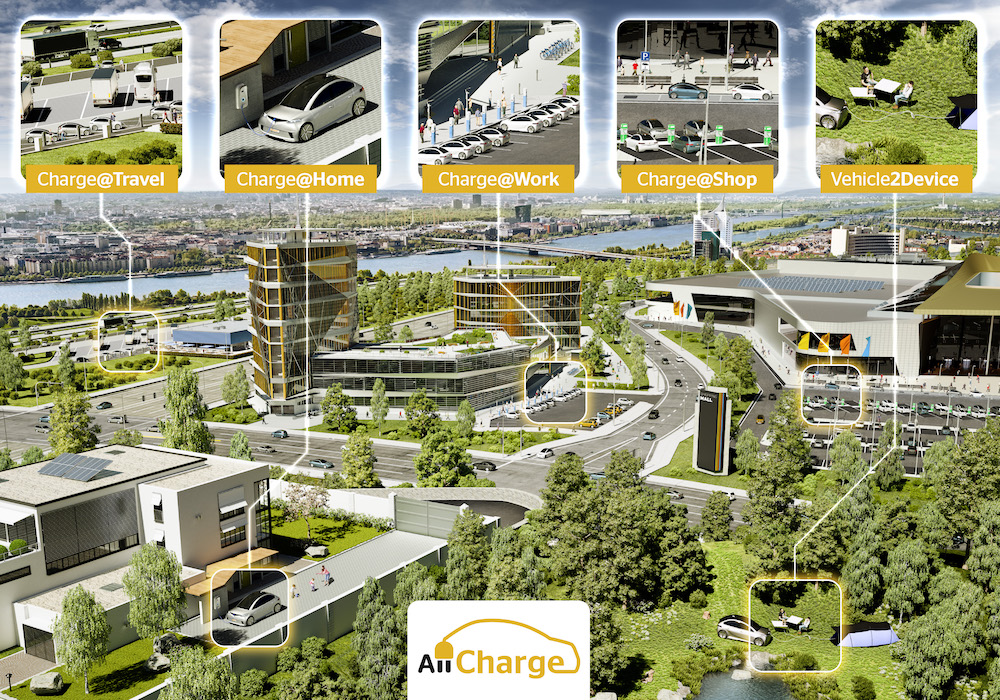 2. AllCharge is a system which “can utilize any charging point whatever the charging rate, type of current or voltage level.” I’ve followed up with Continental PR but if this is true, it would be the first 3rd party system we’ve seen that works with Tesla Superchargers.

AllCharge operates in a unique way. Instead of a dedicated inverter, it will use the vehicle’s AC electric motor inverter to transform AC into the DC that the batteries need to store energy (think of what happens when you use regen brakes). That will obviously save some cost and weight on a vehicle. The system will also theoretically work with CHAdeMO and CCS combo DC charging standards for fast charging.

AllCharge will have a secondary benefit in that the car’s electric motor inverter which already turns DC to AC for the engine, would also be able to send that AC power out of the same charging port.

Due to the high capacity of their batteries, EVs have the ability to double as a power bank. Normally, before an EV with on-board charger can be used in this way, it would first have to be fitted with a power inverter (to convert the DC current into AC current), at a cost of several thousand euros. In contrast, the AllCharge system already comes with pre-integrated with bidirectional capability. And the AC current can be supplied with no upper output limit. The bi-directional capability of the AllCharge system allows the EV to be used as a power source not only in the private sphere but also for tradesmen or mobile service providers, where it offers genuine added utility with the potential to open up new business models. Looking further ahead, this functionality will also make it possible to use electric vehicles as grid-integrated mobile energy stores, enabling them to play a part in the transition to renewable energy. 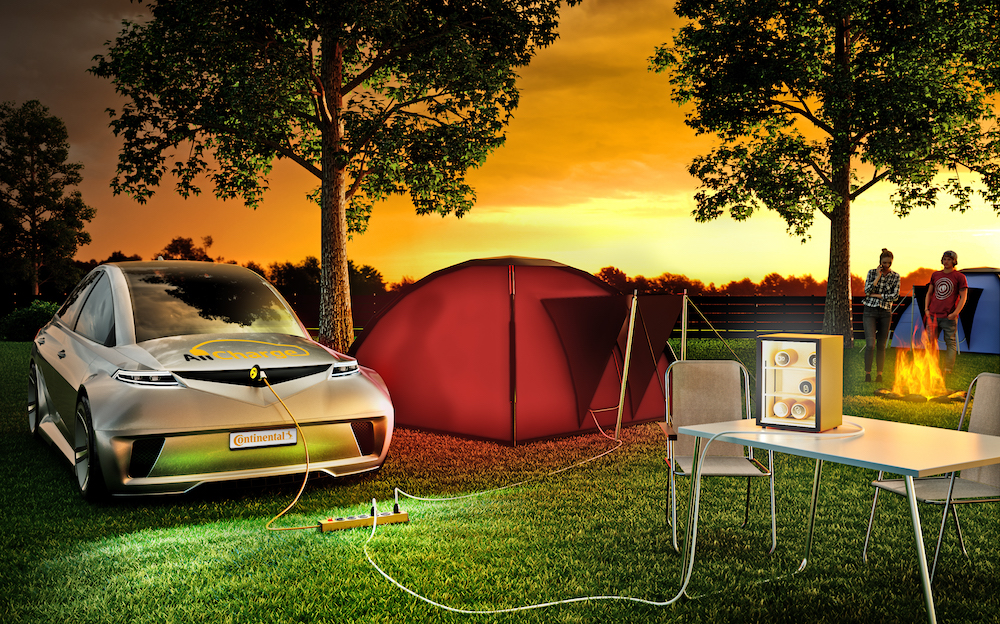 Not only will you be able to go car camping in someone’s back yard like pictured above, you could theoretically go where there’s no outlets. Seriously though, these bi-directional charging ports can be used as a backup battery to the home (like a Tesla Powerwall) or would be able to smartly kick in when the grid is being taxed and then resume charging from the grid when power is cheaper. That’s something – smart bidirectional charging – we know Nissan and other EV makers are working on and we suspect Tesla is working on as well.

As for the wireless inductive charging, we’ve also seen this before from a number of different industry groups including WiTricity, Momentum Dynamics, Plugless, Google and others. What’s needed is a standard to be built upon.

On that front, all of these announcements sound suspiciously like the CCS 3.0 charging standard which includes:

Continental is a member if CharIn, the CCS working group which has an inductive wireless working paper with standardization that many of the other group members can take advantage of.

It would be highly unlikely that Continental would build a proprietary interface, so this is likely one that will be compatible with others.

If this is indeed the case, we might start to see other CCS 3 announcements at CES which would be quite exciting. Let us know your thoughts in the comments.