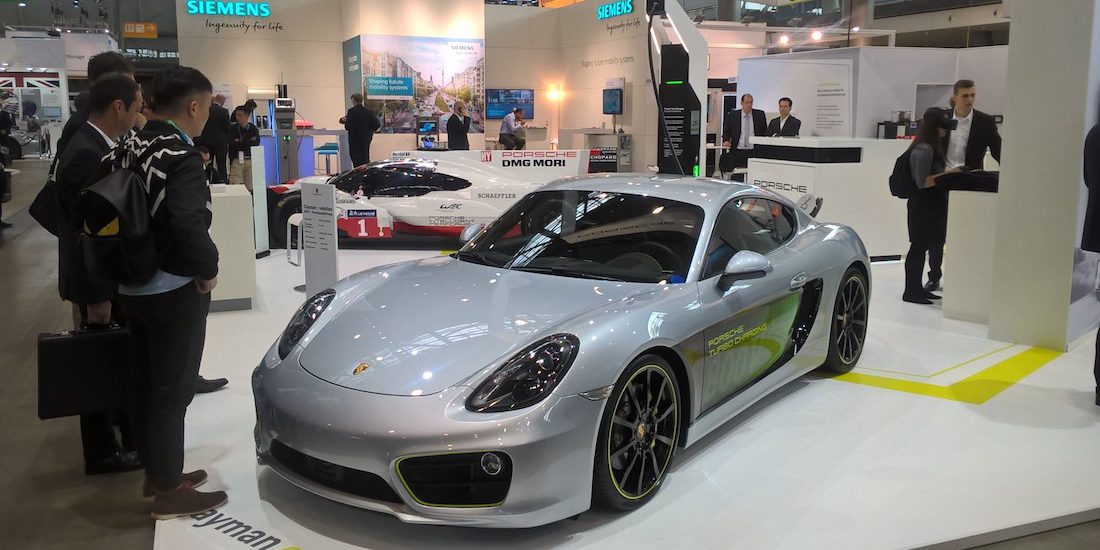 In case you had doubts about the existence of Porsche’s promised 800-volt ultra-fast charging system for the Mission E, the German automaker’s upcoming first all-electric vehicle, the company showcased the development electric car used to test the technology.

At the 30th Electric Vehicle Symposium in Stuttgart this week, Porsche is displaying a Cayman that they converted with an all-electric powertrain in order to test the new high-power charging system.

“With the Cayman e-volution the company presents a research vehicle with a charging voltage of 800 volts that accelerates from zero to 100 km/h in 3.3 seconds and offers a range of 200 kilometres. The vehicle will not go into series production, but does give an early indication of just how sporty Porsche believes e-mobility can be. It is also a hint of what is to come in 2019, when Porsche will bring its first purely electric sports car, the Mission E, into production. The Mission E will be capable of covering a range of over 500 kilometres, and will be able to charge its batteries to 80 per cent within just 15 minutes.”

They are apparently calling the technology ‘Porsche Turbo Charging’. It sounds like the system will work a lot like Tesla’s Supercharger whereas the actual charger is feeding two ports – though in Porsche’s case, the overall system is reportedly “capable of achieving a charging capacity of up to 320 kW per vehicle or twice 160 kW.”

As we recently reported, Porsche started installing the first stations using this technology in Germany and the US. It will also be part of the network deployed by a joint venture between Porsche, Audi, BMW, Daimler and Ford in Europe.

Porsche’s Mission E, which is due in 2019, is expected to be the first or among the very first vehicles capable of using the charging technology. We recently had a close look at Porsche’s latest all-electric Mission E prototype and more details following a special event in Norway.