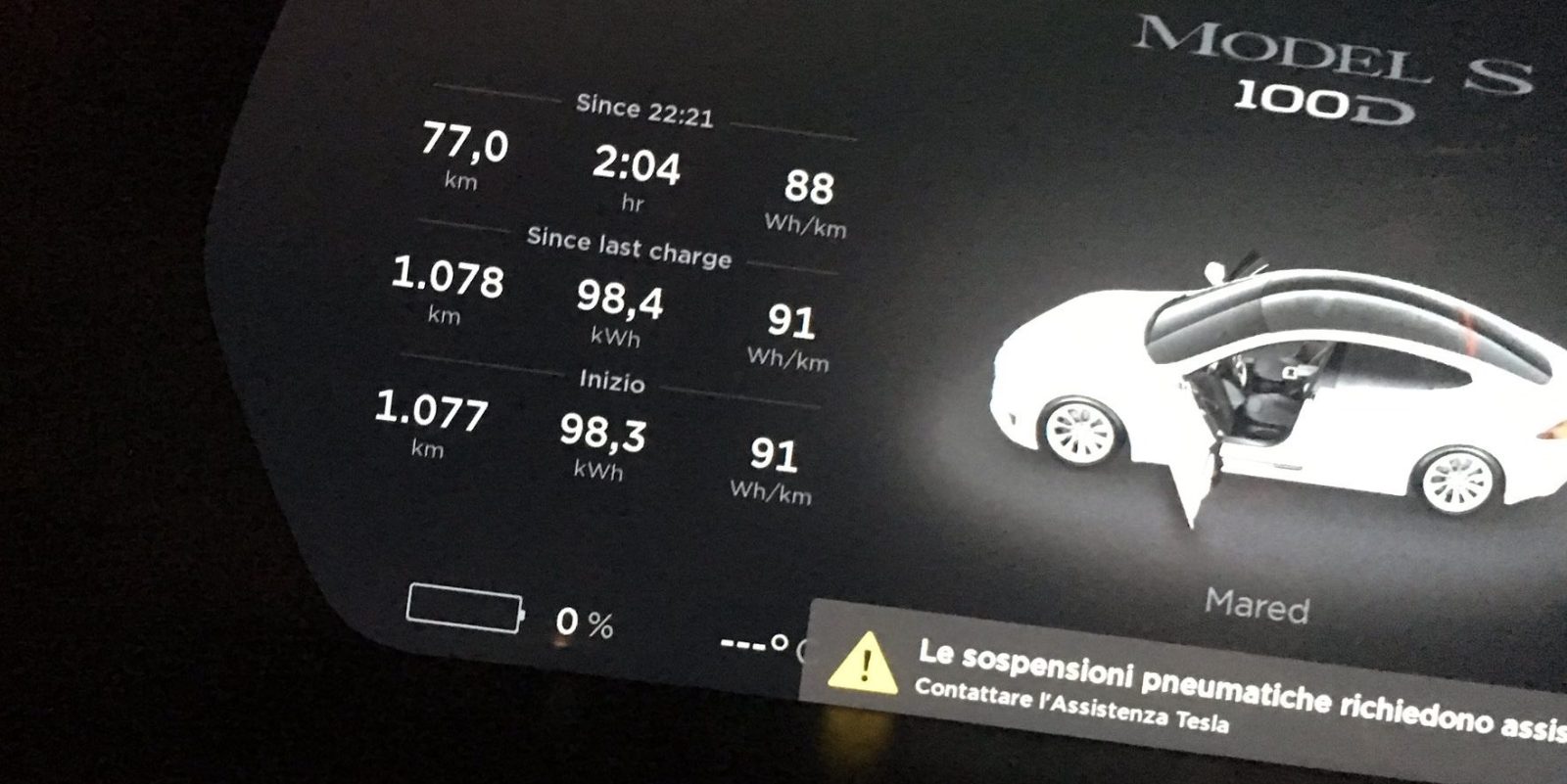 Just over a month ago we saw a new hypermiling record in a Model S – 560 miles (901 km) on a charge.  When we posted our article about that, Tesla CEO Elon Musk responded on twitter, stating that “over 1000 km should be possible in a 100D with the right tires.”

Well, now we have news that a Tesla Owners group in Italy took Musk up on his challenge and managed to shatter the previous hypermiling record with a Model S 100D, beating it by over 100 miles and finishing just shy of 670 miles on a single charge.

The record was announced in a tweet by Tesla Owners Italia, with a single photo showing the car’s “since last charge” entry on the “trips”  function in the vehicle display.

While not as well documented as previous hypermiling records, the photo clearly reads that the car used 98.4 kWh of energy to go 1,078 kilometers (670 miles).  This works out to a very impressive 91 Wh/km, or 144 Wh/mi.  Compare this to the usual efficiency of a Model S, which is nearly 300 Wh/mi.

In the tweet, you can see that the last 2 hours of driving, after hitting the 1,000km mark, were even a little bit more efficient, achieving 88Wh/km over the last 77km of driving.  This also shows how the record was set – at a pretty low speed. Dividing those numbers out we find that the last two hours were traveled at an average of about 23 miles per hour. It’s likely that the rest of the drive was done at similar speed, which means that this Tesla drove for more than an entire day to achieve the record.

After reaching 1,000km, the driver went live in a facebook video, which can be viewed on Tesla Owners Italy’s facebook page.  The language is Italian and the video is 84 minutes long, but a little skipping around will give you an idea of what it was like.

These hypermiling records don’t generally mean a whole lot, since they’re usually done by driving in an impractical manner – like, in this example, low speed for ~29 hours straight.  But this goes to show why the phrase “your mileage may vary” is important to remember, especially in the context of electric vehicles.

Many consider an EV’s EPA range number to be gospel, as if a car will function perfectly until it hits the limit and then suddenly die by the side of the road. But a driver can always do better or worse than EPA range, by driving more or less efficiently, as conditions require.

The number one question any EV driver gets is “how far can it go?” And of course, the EPA range number is the easiest and probably most accurate “average” answer to this question – but, as some enterprising owners in Italy have shown, every car “can” go much further than EPA range numbers suggest – under the right conditions.