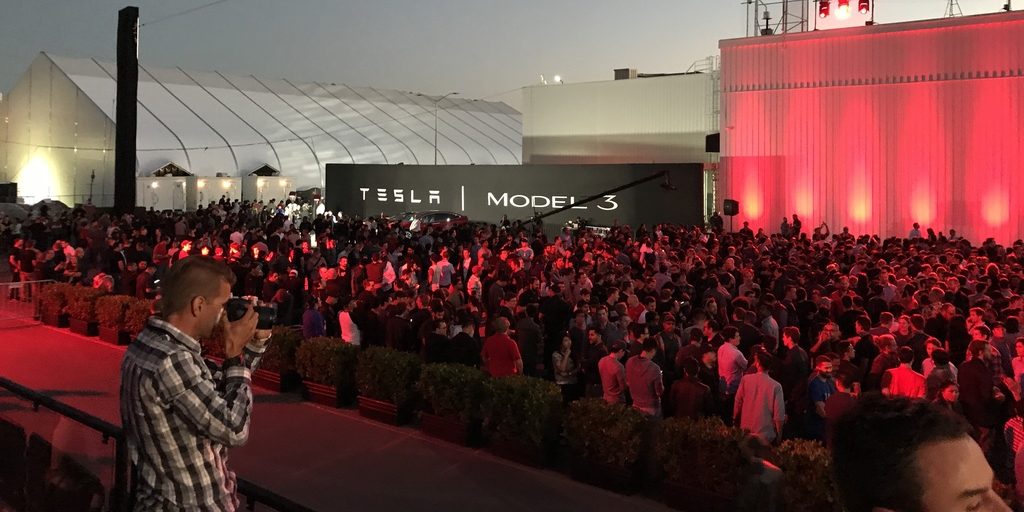 The Tesla Model 3 delivery event (watch here) is live, and we’ll continually update this post (adding to the bottom of the post as more information becomes available) with any additional information from the announcement which isn’t covered in our other posts from the event (which will be posted when Elon takes the stage at 9PM PDT).

This is one part of a series of posts from the Model 3 unveiling. You can read the other parts here:

Electrek on the scene at the Model 3 delivery event, where the party has been going on since 7pm.  Tesla has the crowd corralled in an area nearby a lot of Model 3s lined up at superchargers, as you can see in our tweets below, with a panorama of the event and an 18 minute periscope video overlooking the festivities.  It looks like there are about 40 Model 3s ready to be delivered tonight.

A pano of the model 3 launch event pic.twitter.com/A0wCGiaH0f

The stream is live, with long-time Tesla employee Adam Slusser talking a little about the history of the company.  Adam has thrown to employees from the design studio, gigafactory and auto assembly lines, to talk a little about their jobs and their teams.

Now Brielle Loveday, the namesake of Tesla’s Project Loveday fan-made video contest is on stage, introducing the top three videos.  Cheers erupt from the crowd as MKBHD faces off against a Lamborghini in the winning video.

Watch another of our live periscope videos from the event here.

The “pre-show” is now over, and we’re waiting for Elon to take the stage.  Tesla’s chief designer Franz von Holzhausen tricks us all by stepping on stage ahead of Elon.

Elon has hopped on stage.  The projector for the event is being powered by a Model S, and the screen is the side of the factory building.  Elon referred to “the future”, then stopped himself…”well, the future being now.”  That’s right folks.  The Model 3 is now released.  It is officially the future.

Tesla just showed a video of the Volvo S60 (“one of the safest cars in the world”) and Tesla Model 3 doing side crash tests.  The Model 3 looks like it performed significantly better than the S60.  See the crash test video here:

Elon is now talking about production challenges, and about supercharger deployment.  Joking about the comments he gets on twitter – “when do I get my car” and “how do I charge my car.”

Now Elon is talking about the car’s specs, which you can read our full post about here.  From some back of the napkin math (using volts & amps and the “miles per hour” charge times listed in the specs), it looks to me like the smaller battery is 50-55kWh, and the larger is 75-85kWh.

The first 30 owners are now walking to their cars, adjacent to the event crowd.  Elon says Tesla has made 50 “production” cars this month – 30 of which go to customers, 20 of which will be used for production validation.

Here’s a photo of the first 30 owners claiming their cars:

Elon is now talking to early reservers, and telling everyone who reserved the car early that their loyalty “really matters” and they’re going to do everything in their power to get the cars to everyone as quickly as possible.  He spoke directly to the camera during this statement, and did seem quite sincere, perhaps even a little shaken up, when talking about the loyalty that customers have shown to the company.

Elon is off the stage now, and the livestream has switched to music and generic images of the cars.  Looks like the presentation is over folks.  We’re in the future now.

Another periscope video of our test ride in the Model 3.