Tesla Model 3 design is “pretty much final,” plus new insights from a batch of high quality photos 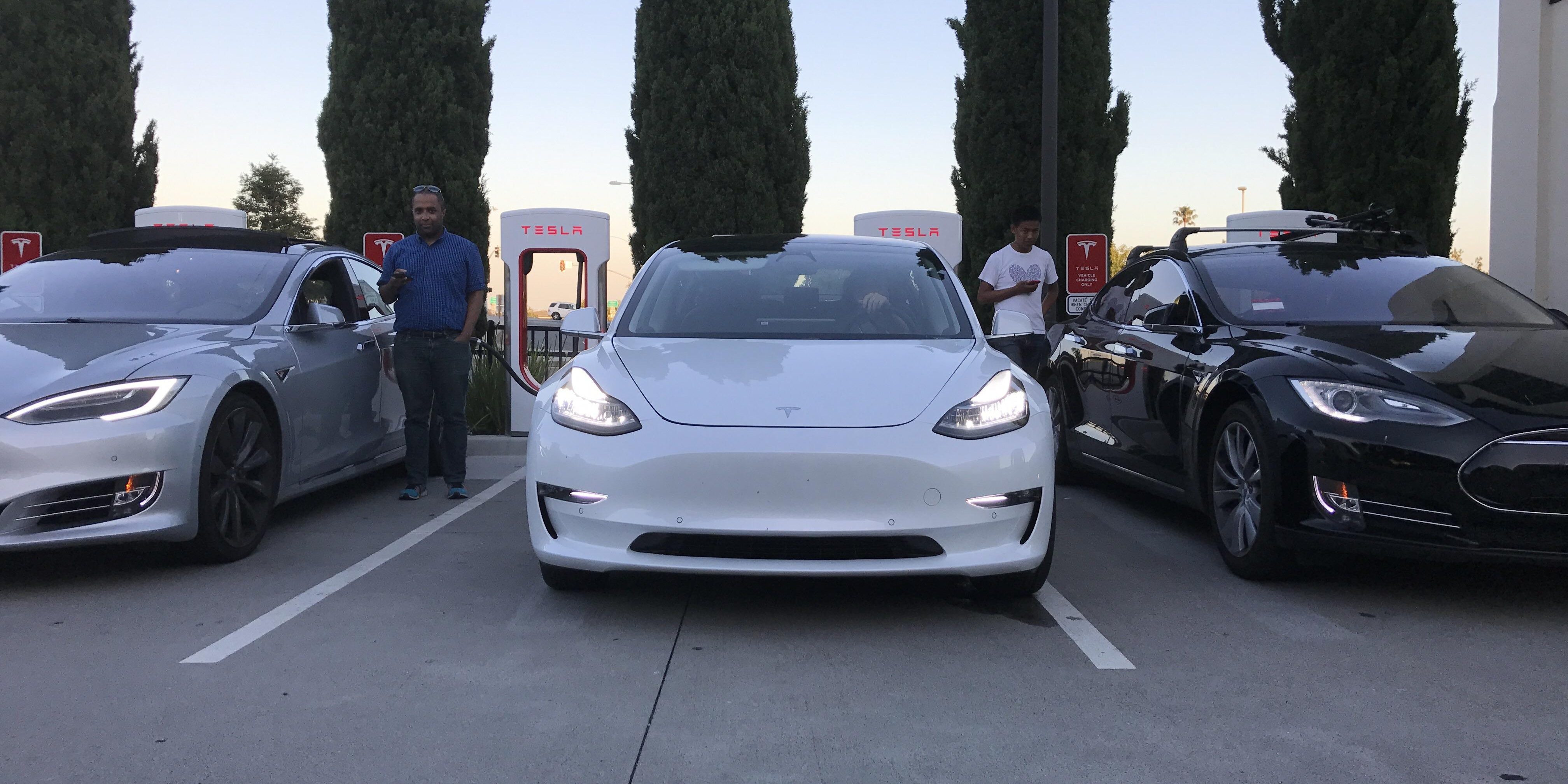 Another day, another batch of Model 3 photos, and more new insights about the car’s design.  This time the photos come from multiple posts on reddit by You You Xue, u/youyouxue, who spotted the Model 3 at the San Mateo supercharger and got several high quality photos which we’ll have a look at below.

Xue said he spoke to the employee who was driving the car, and that the employee stated that the car is pretty much the final design before the first delivery (*not a direct quote from the employee, but Xue’s summary of the conversation).  One thing to note is that the cockpit and steering wheel looks the same as it did in the other recent batch of photos we saw of them, so if this is pretty much the final design, then it’s likely that we’ll end up with a rather conventional steering wheel design on the finalized vehicle.  It’s still possible that it might change, but looking less likely as we get closer and closer to release.  Today’s photo of the steering wheel and interior does look the same as those other recent photos, so if Tesla is still keeping any secrets, they must be keeping them rather close to their chest. 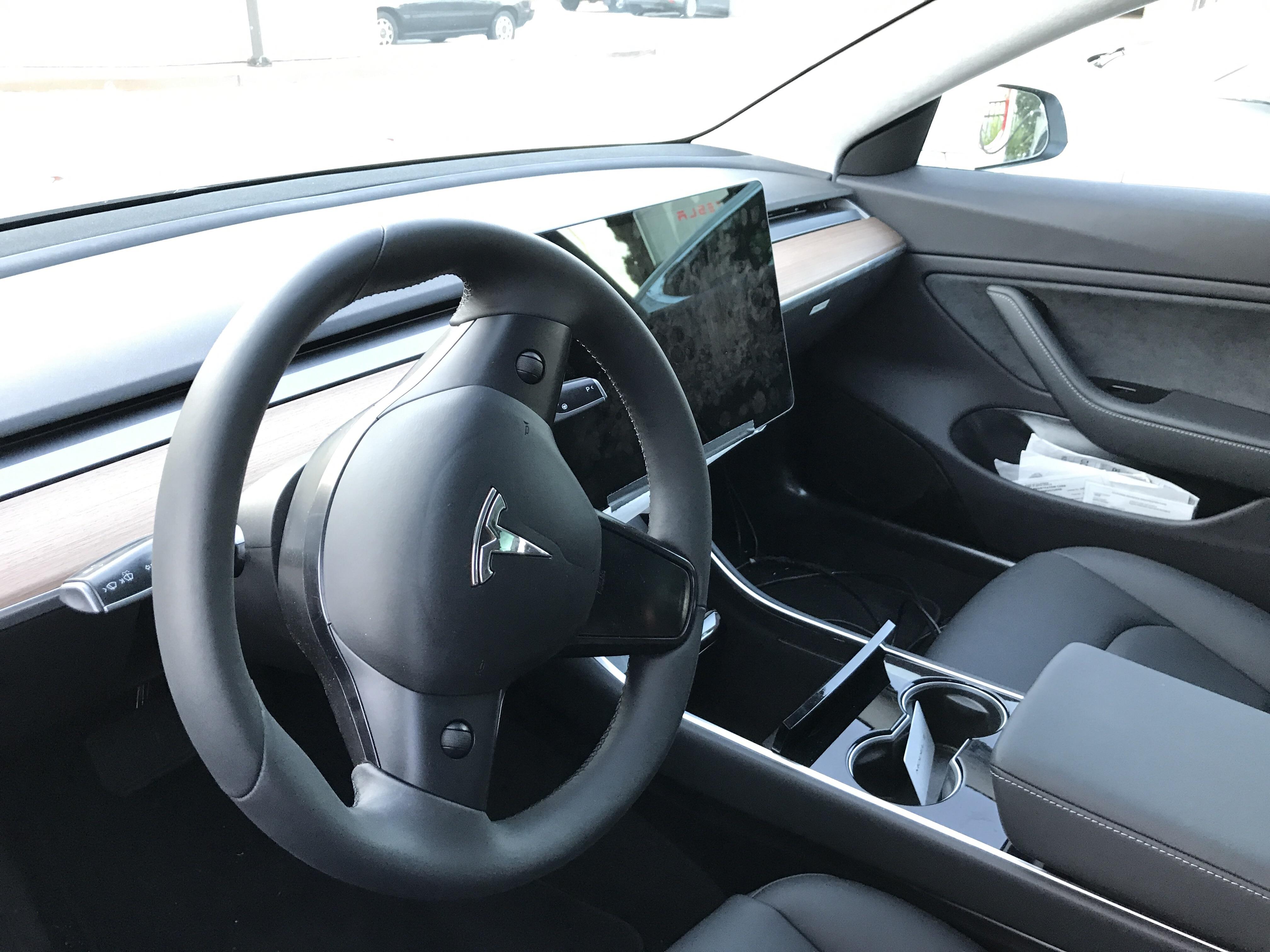 We’ve seen the car exterior several times, but youyouxue managed to get an up-close photo of the wheel and AP sensors.  It looks like the prototype uses Michelin Green X tires for low rolling resistance, which should pair well with the aerodynamic wheels which we’ve seen several times.  I quite like the look of the wheels, and Tesla says they will make it to production.  All I hope is that they don’t suffer the same fate that the aerodynamic wheels for the Model S did (very few cars exist with them, as they were cancelled as an option not long after going into production). 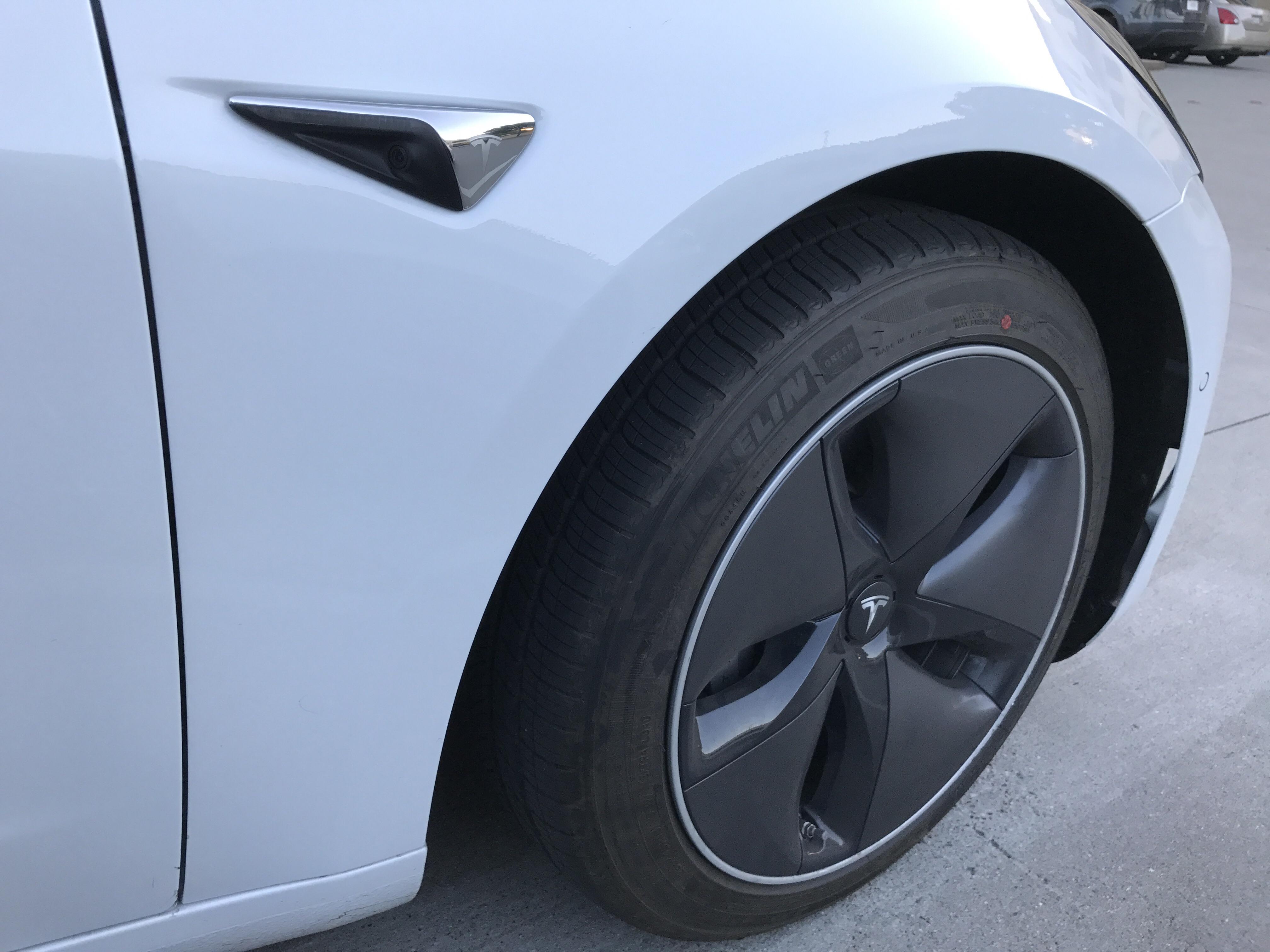 And here’s a photo of the main front cameras, including dedicated rain sensor in the upper right: 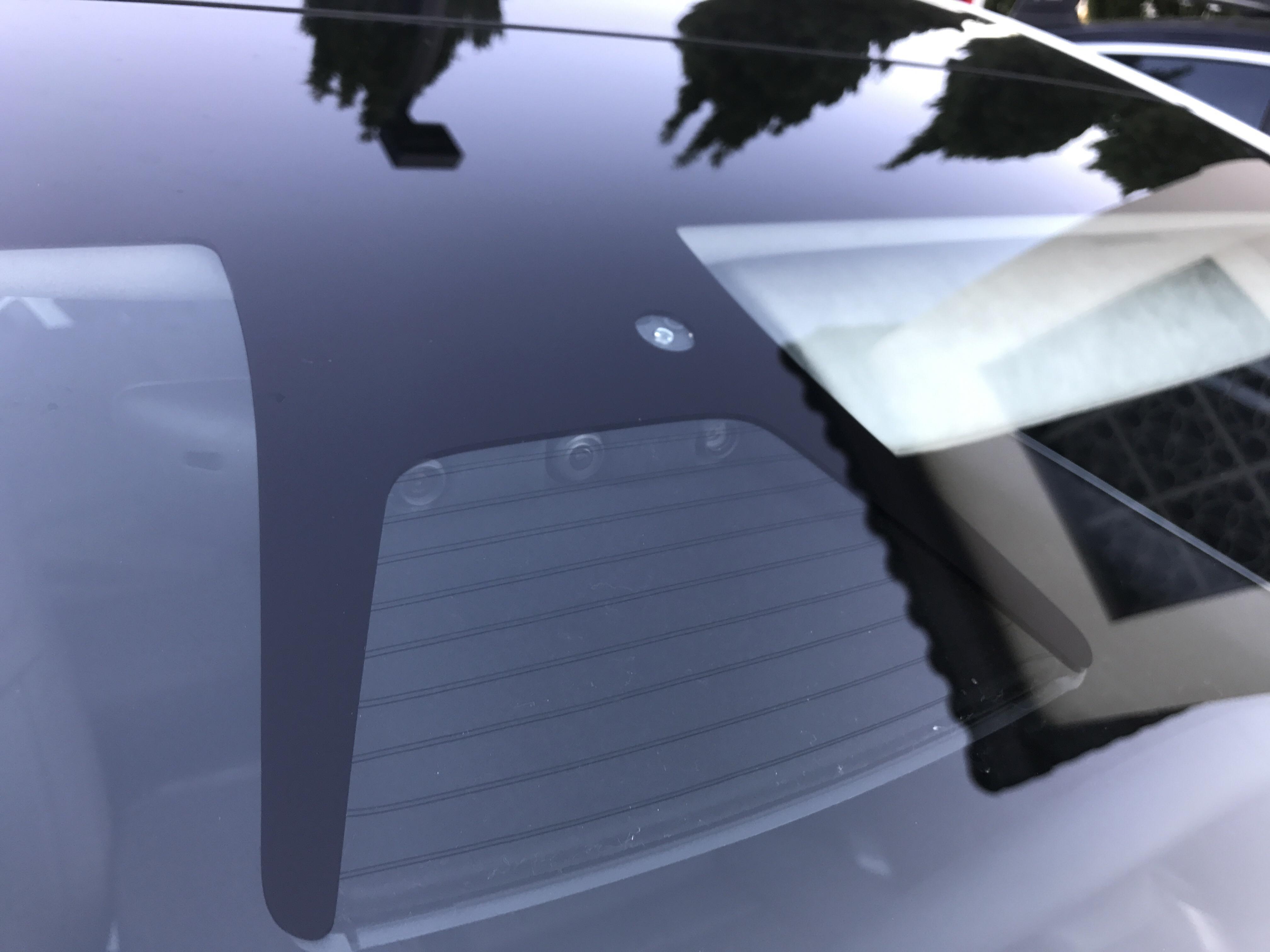 Other exterior photos show us mostly things we’ve seen before, but one reveals something which current Model S owners will probably be quite excited about: 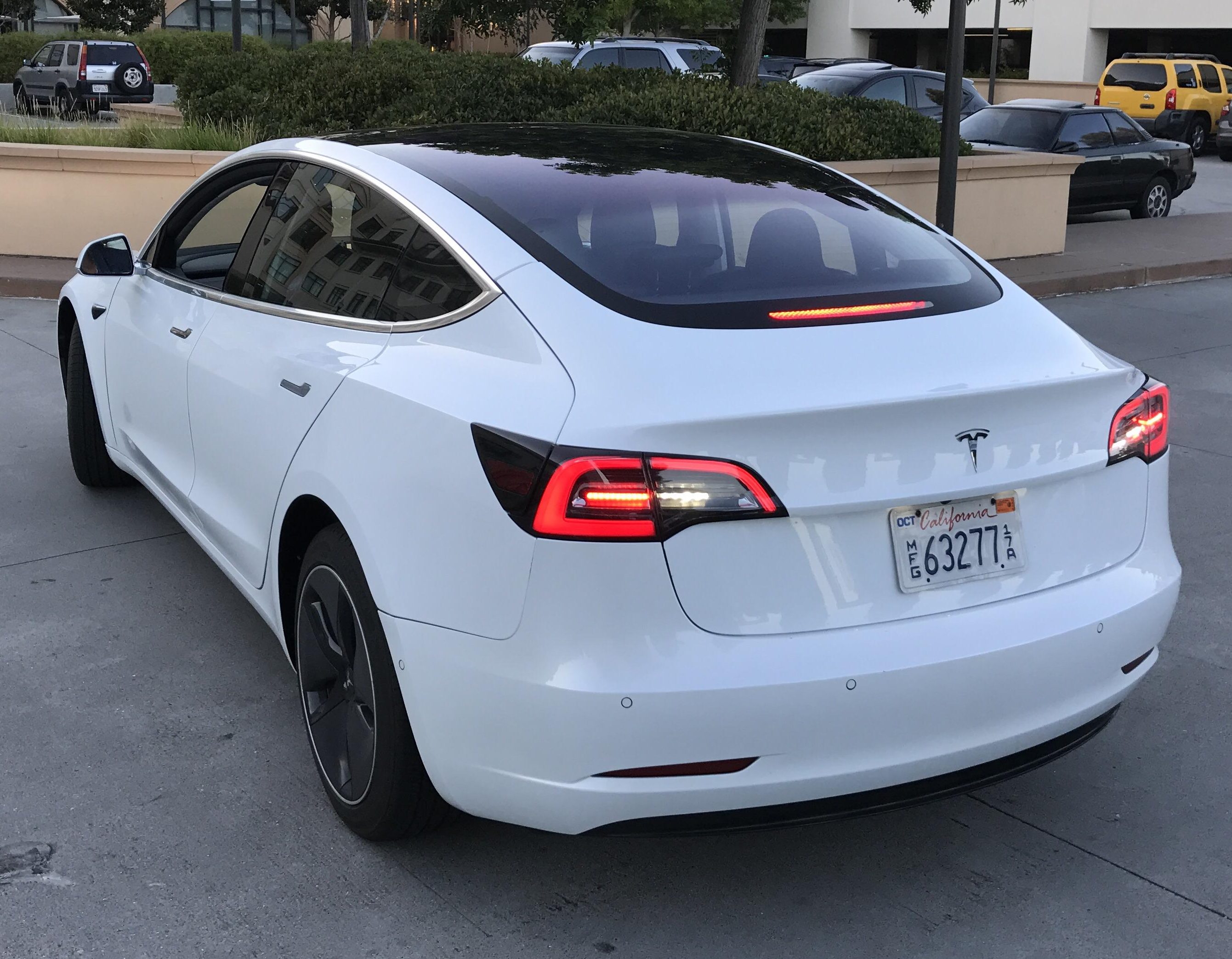 Looking closely, you can see through the rear window that the center head restraint for the rear seat is folded down.  One of the more common complaints from drivers of the Model S is that rear visibility through the narrow rear window is compromised by the fixed center head restraint, and the Model 3 looks like it will at least partially solve that problem by allowing drivers to fold the headrest down to clear up a little more rear visibility.  Having a narrow rear window is a necessary sacrifice in an extremely aerodynamic car, but offering a solution to at least get the headrest out of the way when it’s not in use should help a lot.

A clear shot of the all-glass roof shows its heavy tint, and the relatively conventional sun visors (unlike the really interesting fold-out sun visors for the Model X’s awesome panoramic windshield): 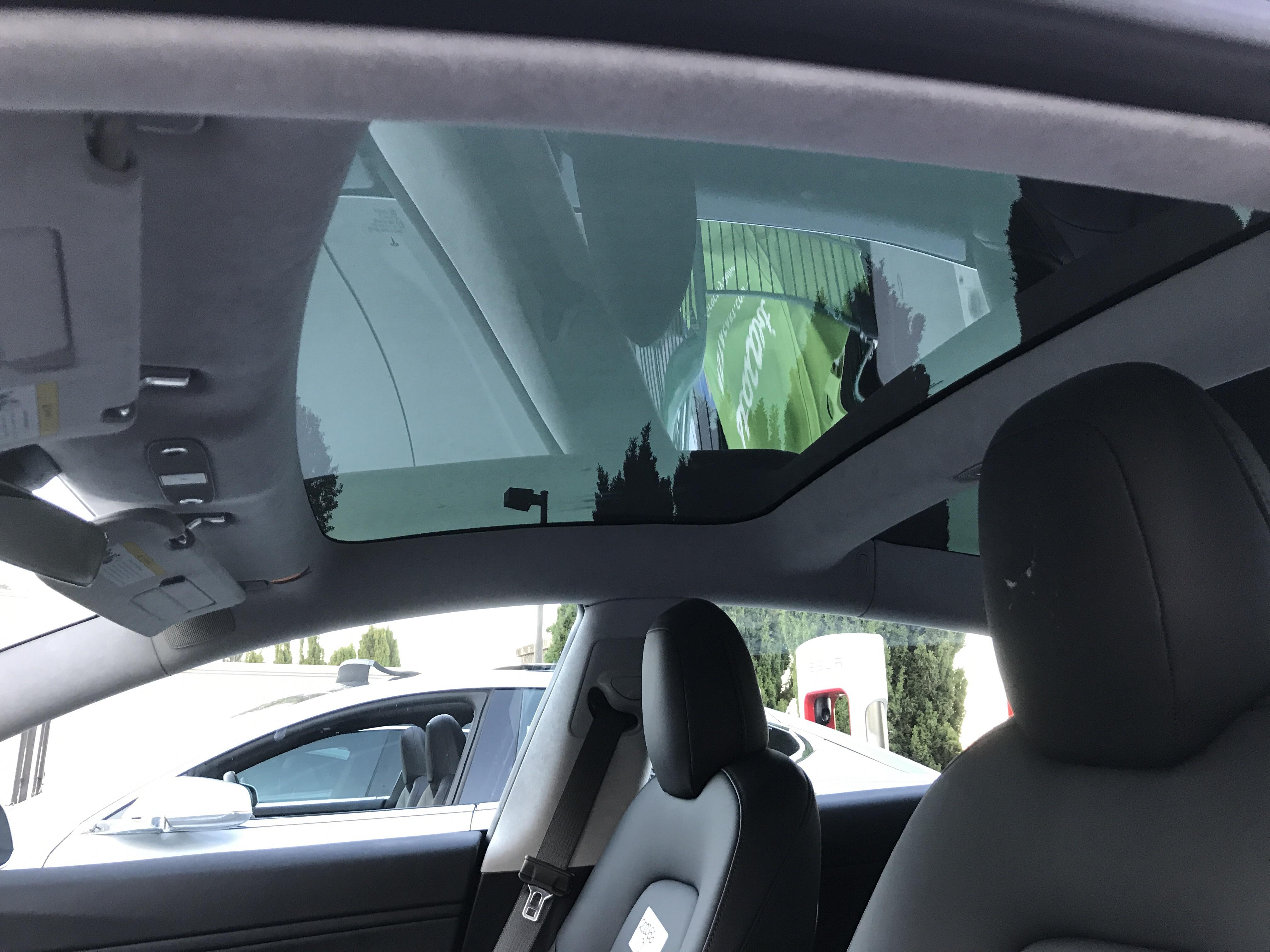 Finally, since the car was at a supercharger we need to see something about charging, right?  Well, we got an up-close photo of the charge port while in use: 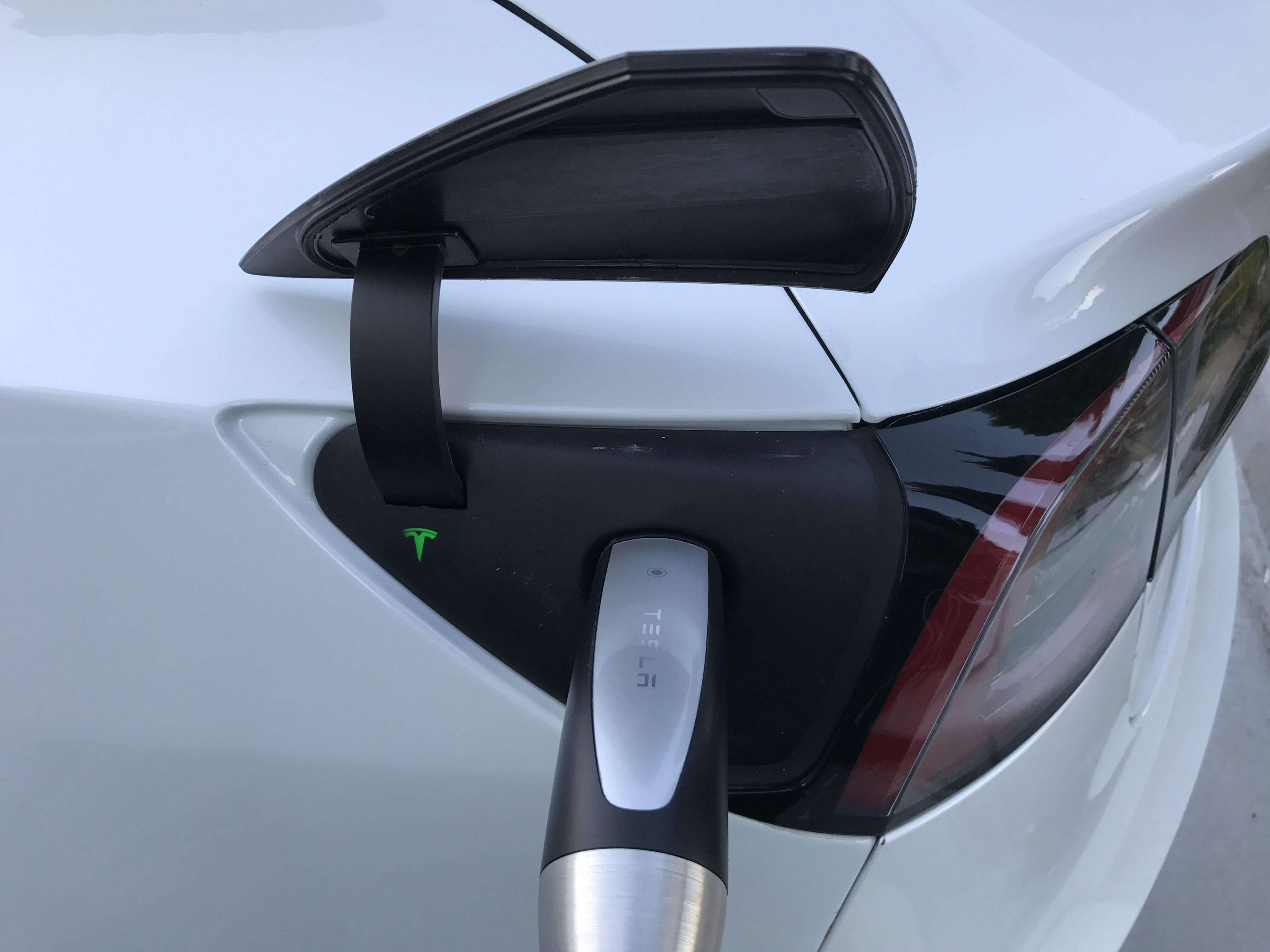 The charge flap folds upwards, revealing charge port and charge indicator light.  Instead of a ring around the charge port, we get a light with the Tesla logo, which lights up and flashes with the same colors as the current Model S charge port.  According to Xue, the charge flap does not close itself – similar to early Model S, but unlike current Model S which can both open and close by itself.  I wonder if we’ll still get the rainbow charge easter egg like the Model S has? 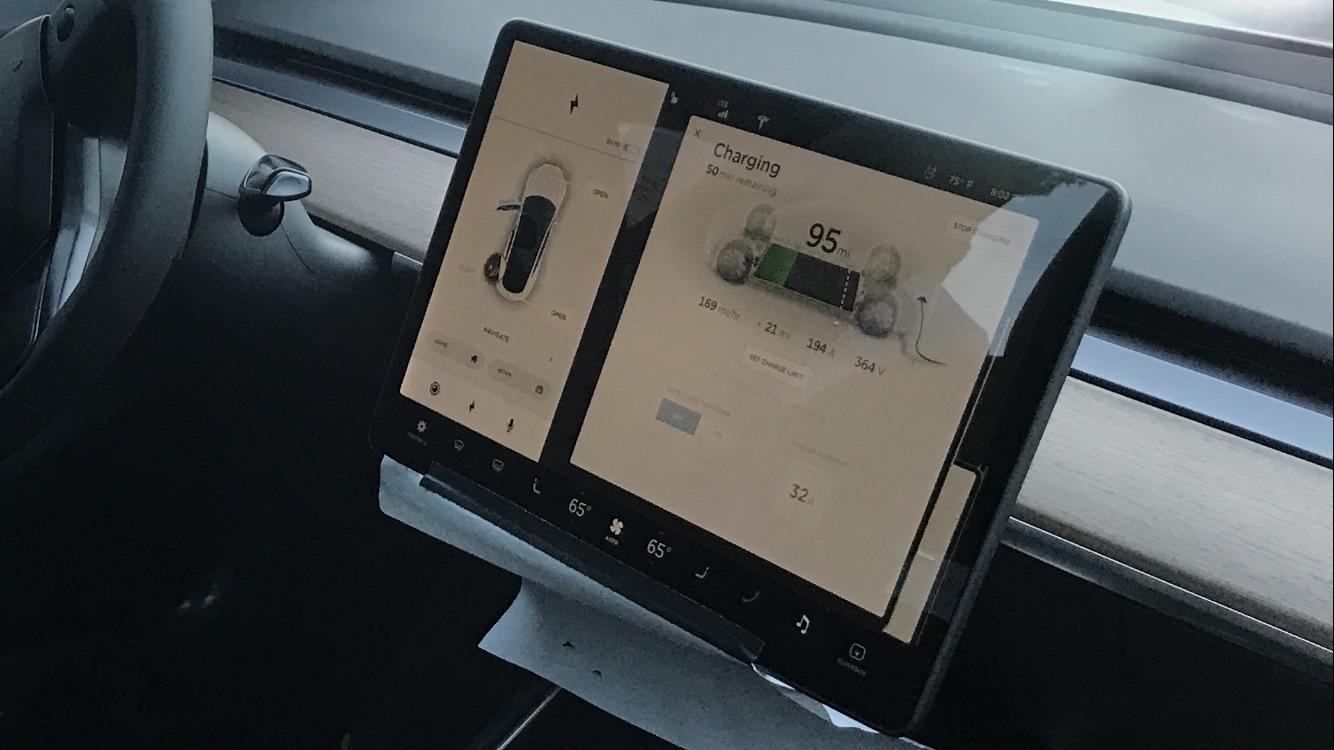 The charging screen doesn’t show us much we haven’t seen before.  The car is charging at 70kW here, but Xue said he was charging from the next supercharger over at 110kW.  Superchargers sometimes split amperage between adjacent stalls, giving more juice to one car than another, so this may not be a full reflection of the top charging speed of the Model 3.  The car looks to be charging at a rate of 169 miles of range per hour, which is still plenty respectable compared to every other EV out there, but not as good as Tesla’s top 145kW rate can deliver.

Update: Here we look at the implications on the range of the Model 3 based on this UI.

Anything else you’ve noticed in this most recent batch of photos?  Let us know in the comments.