Since its unveiling, the Model X wowed quite a few people with its all-glass panoramic windshield, which Tesla claims is the largest in production. Even though Tesla manufactures a surprising number of components in-house, the company doesn’t make its own glass parts, as it would be expected.

Consequently, Tesla became one of AGP’s biggest clients. The company built a new state-of-the-art facility in Lima, Peru, where it now manufactures the new windshield. The company started operation at the new plant last summer, around the same time Tesla launched the Model X.

AGP describes the new production line at its new facility:

“As of summer 2015, AGP has the ability to make even larger glass with more complex curvatures than previous capabilities, which were already some of the highest in the industry. Our new moving line boasts one of the largest bending furnaces in the industry with the latest automation in robotics and glass processing equipment. This new production line not only allows for the production of complex shapes, but gives AGP the ability to do them at OEM production volumes.”

And volume production is well on its way as you can see:

The company also claims a focus on the latest in lightweight technology, which they point out is especially important to the electric and hybrid carmakers where less weight means more mileage achieved on a single charge.

AGP was founded in 1965 and over the years developed an expertise in laminated glass, and especially bullet resistant laminated glass. It eventually entered the market of replacement glass and only relatively recently started supplying glass to OEMs like Tesla. 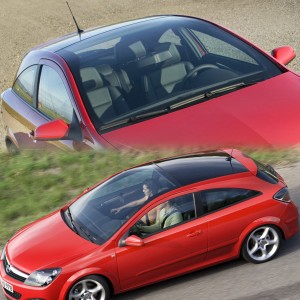 Interestingly, the company was involved in the development of the Opel Astra GTC’s “panorama” windshield option (see on the right), which is probably the closest thing to the Model X’s panoramic windshield.

Much like the glass going all the way up above the driver and front passenger to the Falcon Wing doors on the Model X, the Astra GTC’s windshield goes all the way to the glass top.

The design offers an unparalleled obstruction-free view, but it required Tesla to develop a relatively complex sun-visor system, which remains tucked in the side when not in-use. The system is visible on the featured image above.

Tesla managed to overcome the sun-visor problem, but another possible drawback could be the cost of replacement in case of an accident, which is still unknown.

In the meantime, it’s interesting to see suppliers grow with Tesla. AGP’s new factory is certainly worth a look. It has a minimalist and somewhat futuristic design. Design Boom visited the plant last week for a feature – visit the site for the full gallery: