Roborace debuts their driverless “Robocar” on track at the Paris ePrix 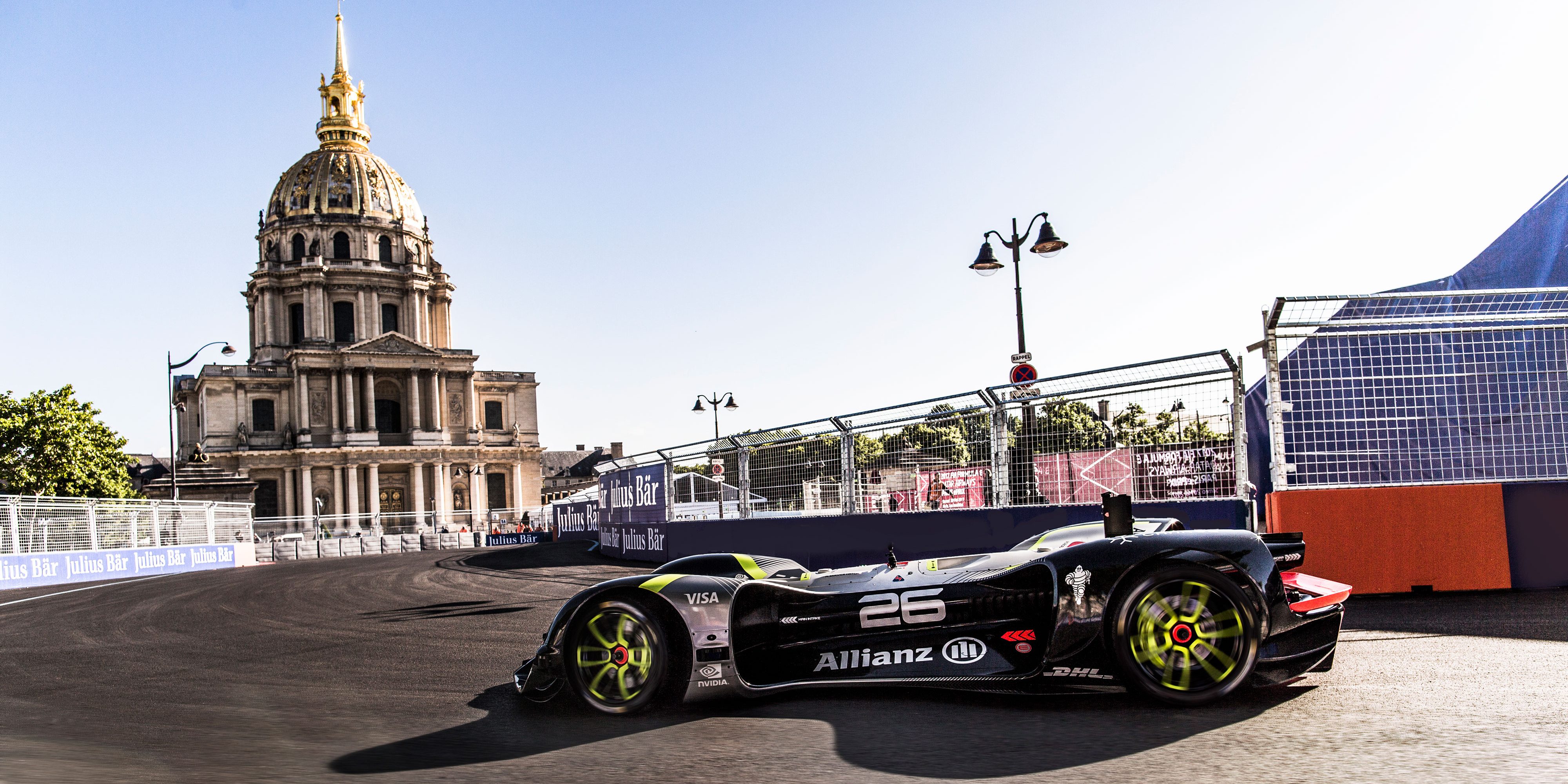 In February, we brought you news of Roborace’s first self-driving car “race” at the Buenos Aires ePrix, using two of their “DevBot” development cars for the upcoming autonomous car racing series.  But earlier today at the Paris ePrix, Roborace took their actual car, dubbed “Robocar,” onto a public track for the first time.

Previously, while Roborace has been testing the Robocar around a private test track, it has only demonstrated DevBots in public.  The actual design of the Robocar which will be used for the series had only been shown at their unveiling event back in February, or parked in the paddock at last week’s Monaco ePrix.  The main difference between the two is that DevBots are a stripped-down version of an LMP-style racecar, complete with a cockpit for a human driver for testing purposes.  The Robocar however has no cockpit, and there is no place for a human driver to sit.

Eventually, the Robocar will be capable of speeds over 200mph.  It has four 300kW motors and the battery is capable of supplying 540kW, or 724hp.  This is quite a lot of power compared to the car’s 2,204lb (1,000kg) weight.  To sense the track, it uses 5 LiDAR, 2 radar, and 18 ultrasonic sensors, along with 2 optical speed sensors, 6 cameras and GNSS positioning, all powered by an Nvidia DRIVE PX2 computer.

Several short videos of today’s test have surfaced on twitter.  The demonstration lap was done at low speed with a human-driven chase car following for safety purposes, as you can see in these videos:

Roborace is on track!!! #FormulaE pic.twitter.com/P7o7Bj3L9X

While this certainly seems like a snail’s pace, the car was in “sensing mode,” trying to learn the track environment.  At one point during the lap, the Robocar stopped while engineers checked the accuracy of the car’s line around one of the turns – apparently it was coming a little bit too close to the barriers for comfort:

Well that's not what you want. @roborace in the barrier. Driver OK though. pic.twitter.com/jGbpg78Bwp

Obviously this is not what you’d like to see happening, but we have to remember this was their first time out.  And it’s an improvement from the crash that happened the last time their DevBots took the track together.

Roborace hasn’t posted any official video of the lap proper, but has posted a couple tweets showing the car driving in the pit lane:

Pit lane testing and a congratulations from @LucasdiGrassi. A great start to the day. #Roborace #ParisePrix pic.twitter.com/vclD8leUrF

Out at #ParisEPrix today, watching @roborace's Robocar take to the track for the first time 👌 pic.twitter.com/dTfjBLVAji

Roborace should have more updates for us as they continue testing next week.

So it’s clear that the concept still needs work to get up to its full potential, but that’s the point of the racing series.  While an autonomous racing series seems sort of boring to many race fans at first glance, the real test will be when teams get to jump in and start writing their own software for the Robocars.  Inevitably, the competitive nature of racing will lead to teams taking more risks, finding more opportunities for overtakes, and finding ways around a track or split-second opportunities that human drivers may not ordinarily look for.  This race fan, for one, is excited to see how it all turns out.