Last month I had the opportunity to travel to beautiful Durham, North Carolina on Hyundai’s dime to check out the new IONIQ EV and hybrids. The IONIQ, you’ll recall, is a 3 car strategy from Hyundai aimed at the high-efficiency vehicle market traditionally dominated by Toyota’s Prius line.

Though the Prius-beating 58 mpg and nifty new 12V battery replacement technology in the IONIQ Hybrid was impressive, it’s the IONIQ Electric we’re all here to talk about. I spent the bulk of my time driving the EV – and boy was I pleasantly surprised…

My recent test drive and review of the Toyota Prius Prime left me feeling disappointed. The Prius, once the undisputed champion of efficiency and environmental friendliness, has seen little progress since its debut nearly 20 years ago.  In fact, during those two decades Toyota has succeeded only in adding a few miles per gallon, making appearance and cockpit updates (for better or worse) and incorporating diminutive batteries that can propel the cars 20+ miles almost on their own.

With all this in mind, it shouldn’t come as a surprise to see an increasingly crowded EV market emerging. Seeing the potential demand for green vehicles, Tesla’s founders cited wealthy people trading in their expensive Lexuses for the Corolla-based Prius as part of its rationale to build electric cars more than a decade ago. Tesla’s success has moved the industry to skip ahead of the Prius and Hyundai, a company known to quickly pick up on trends, is now at the forefront. I have to my knowledge never driven a Hyundai vehicle before this event (perhaps a rental?).

Here’s a rundown of the bottom-line IONIQ EV spec numbers we’ve covered over the past year:

In addition to the very impressive IONIQ EV, and the 58 mpg Hybrid IONIQ Blue we mentioned earlier, Hyundai is rolling out a plug-in Hybrid that’s scheduled to hit the streets by the end of the year. We’ll keep following the full IONIQ lineup to bring you all the details but again, I’m here to talk about the IONIQ EV.

It was sunny and relatively warm in Durham for our test drives.  I tested the IONIQ Hybrid only briefly to see how it felt against the EV. As expected, the EV blows away the hybrid on acceleration, especially off the line and on the low end. Also, obviously, it is way quieter, smoother and a better experience all around. As a 2012 Prius owner, however, the hybrid experience was pretty similar to what I was used to in this type of vehicle. One big thing to note here: The Android Auto/Apple CarPlay experience is good vs. non-existant Prius smart connectivity.

Most Hyundai dealers nationwide won’t offer the EV IONIQ on the lot for test drives, they will be special orders and arrive within 2 months of ordering. But at least they are available nationwide (ahem Chevy) so you can take my advice above: Test drive the hybrid, if you like it, you’ll love the EV.

Yes, Hyundai has a rep for emulating other maker’s cars and this one screams “last year’s Prius” to me. But I think many drivers will opt for last year’s Prius-like design against this year’s Prius design. On the inside you get 5 seats vs. the Prius Prime’s 4 seats. That is going to be a big sell for families who need that extra seat. Our family opted for a 2012 Prius plug in over the Chevy Volt back in 2012 almost entirely based on that 5th seat – ironically, last year the Volt added the 5th seat, sort of, and Toyota removed it from its Plug in version this year. The middle seat, likewise, in the IONIQ is mostly a carseat or emergency seat unless you like leaning back on an armrest. 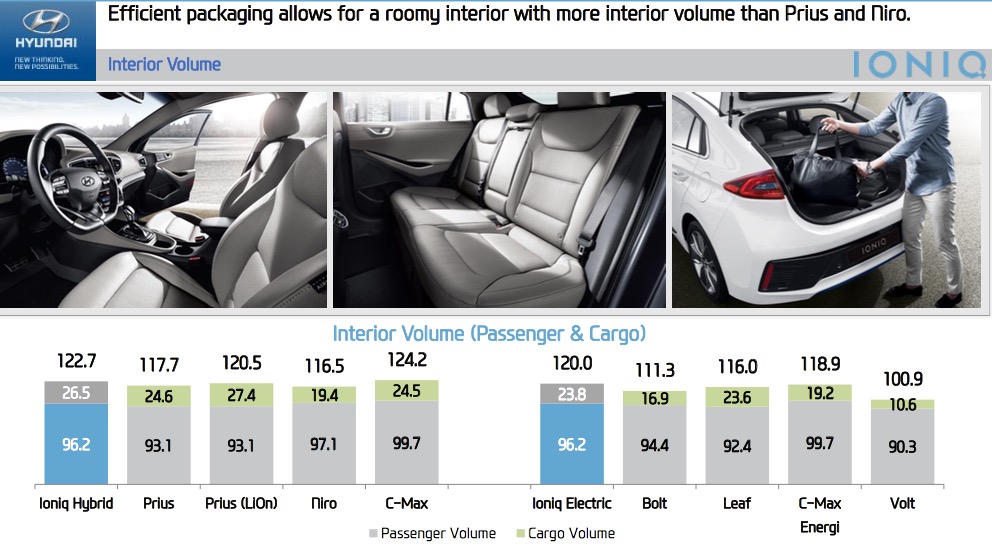 The interior is certainly not offensive and our loaded testers were decked out with the ‘high-end’ styling. I’d call it more utilitarian than luxurious but what do you expect for a $20,000 EV?

The outside, while Prius inspired, is much more toned down and sedan-ish than its competitor. It isn’t offensive and downright sporty if you consider the price point.

Trunk and cargo space is a little bit better than a Prius and you could tell the Prius was the vehicle that Hyundai was chasing when it designed this car. It is both a little wider and shorter than the Prius and has more room inside. 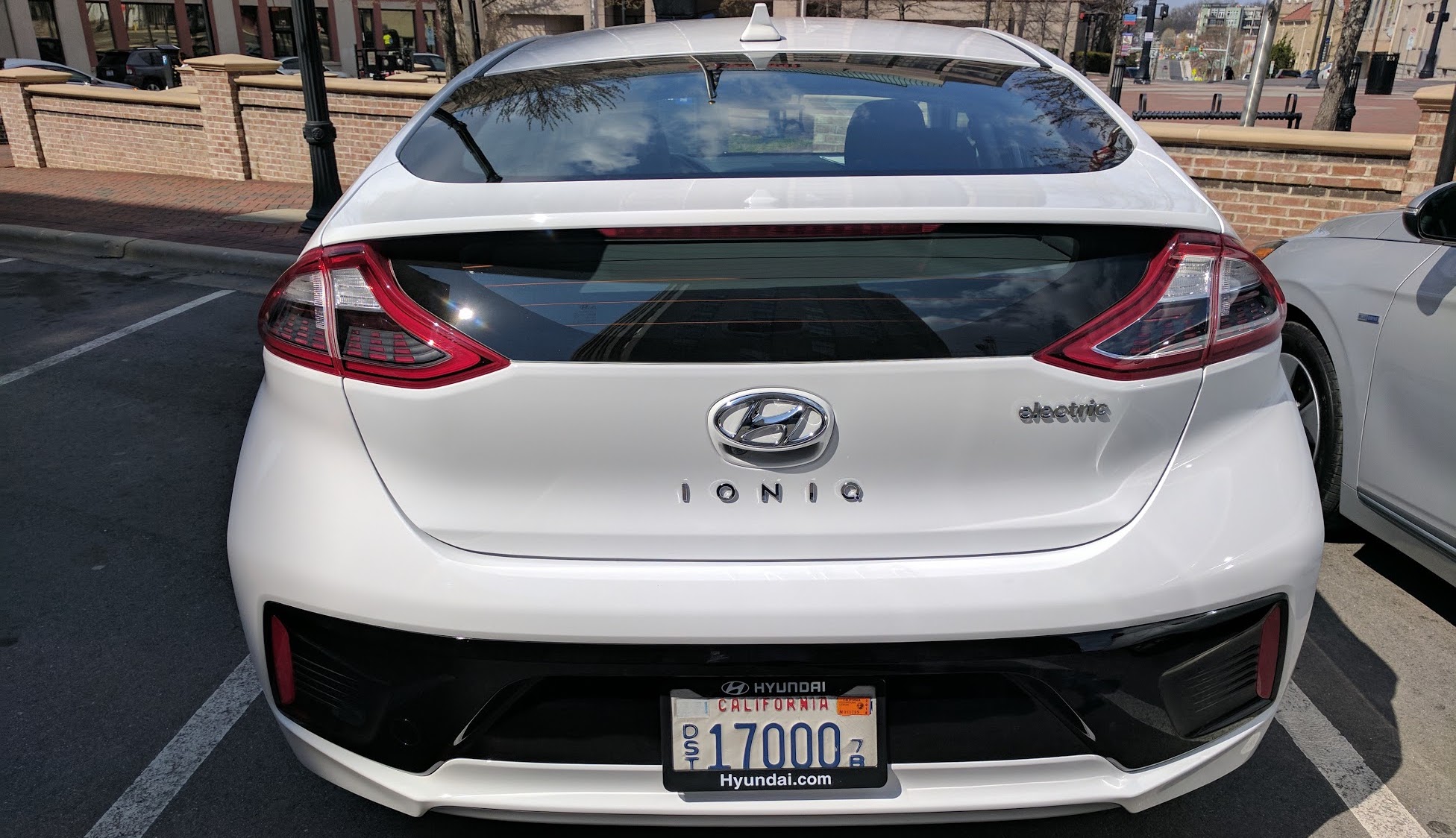 Here’s a look from the back:

Here’s a look at the dashboard EV settings:

Again, what you are getting here is a very pleasing but not luxurious design that fits well with the car’s price and demographic.

Where the IONIQ differentiates itself is its price/EV range. Hyundai does this by making the car super-light compared to other EVs. Compared to the very heavy Tesla Model S, it is about 40% lighter. That helps it get about 40% more miles per kWh of battery capacity. Check out the below table compiled by Bjorn Nyland in a very good video here. I’d expect Tesla’s Model 3 to have similar specs to the IONIQ.

The IONIQ has the same-ish .24 coefficient of drag as Tesla’s vehicles so it slips through the air as well. The plastic nose-cone from the original Tesla Model S design made it over to the IONIQ EV (vs. the grill on IONIQ hybrid) so that helps too. 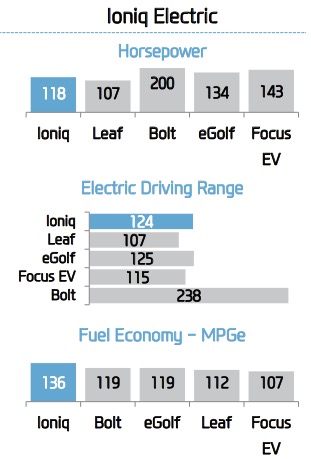 Compare the IONIQ’s 125 miles from 28kWh pack specs with the new Nissan Leaf’s bigger 30-kWh pack but significantly smaller EPA-rated 107 miles of range. Or the BMW i3’s, which is the second best MPGe contender at 114 miles from the 33kWh pack. The Kia Soul EV gets a little over 100 miles from a 32kWh battery

This is by far the most impressive bit of engineering to me.  Hyundai is squeezing more miles of range out of a smaller battery than the competition while not losing much, if anything in cargo space and acceleration.

If you’ve driven a Prius or similar, you know that the driving experience of a hyper-efficient vehicle leaves something to be desired. That’s the efficiency calculus: Smaller wheels, lighter parts, efficient engines all are sacrifices you make which comes out in the driving experience. That said, I found the IONIQ EV to be surprisingly smooth and responsive.  Acceleration wasn’t nearly as quick as a Bolt EV or i3 (Tesla? LOL) but it blew away the Prius Prime and Kia Soul EV off the line and in traffic. Handling was absolutely fine and frankly better than expected.

I drove the car hard in the test drive, gunning it on-ramps and stoplights, hitting pot-holes and speed bumps and never strayed far from the stated range. It will be interesting to drive this in the winter with its small 16″ Michelin Green, low rolling resistance wheels and still untested cold weather range.

I didn’t have time to drill down on the safety features so I’ll just put up Hyundai’s marketing until I have a chance to update with some longer range testing. In my time with the vehicle I didn’t run into a situation where I would have needed the features but we all know real world driving can be fraught with danger. 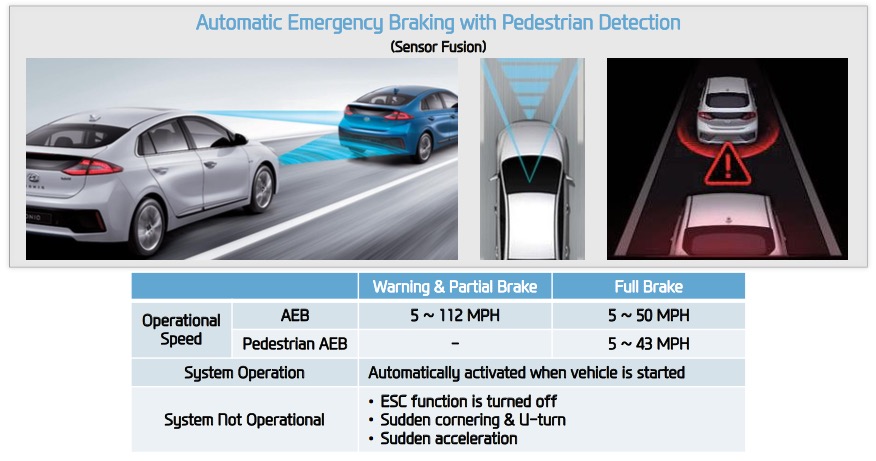 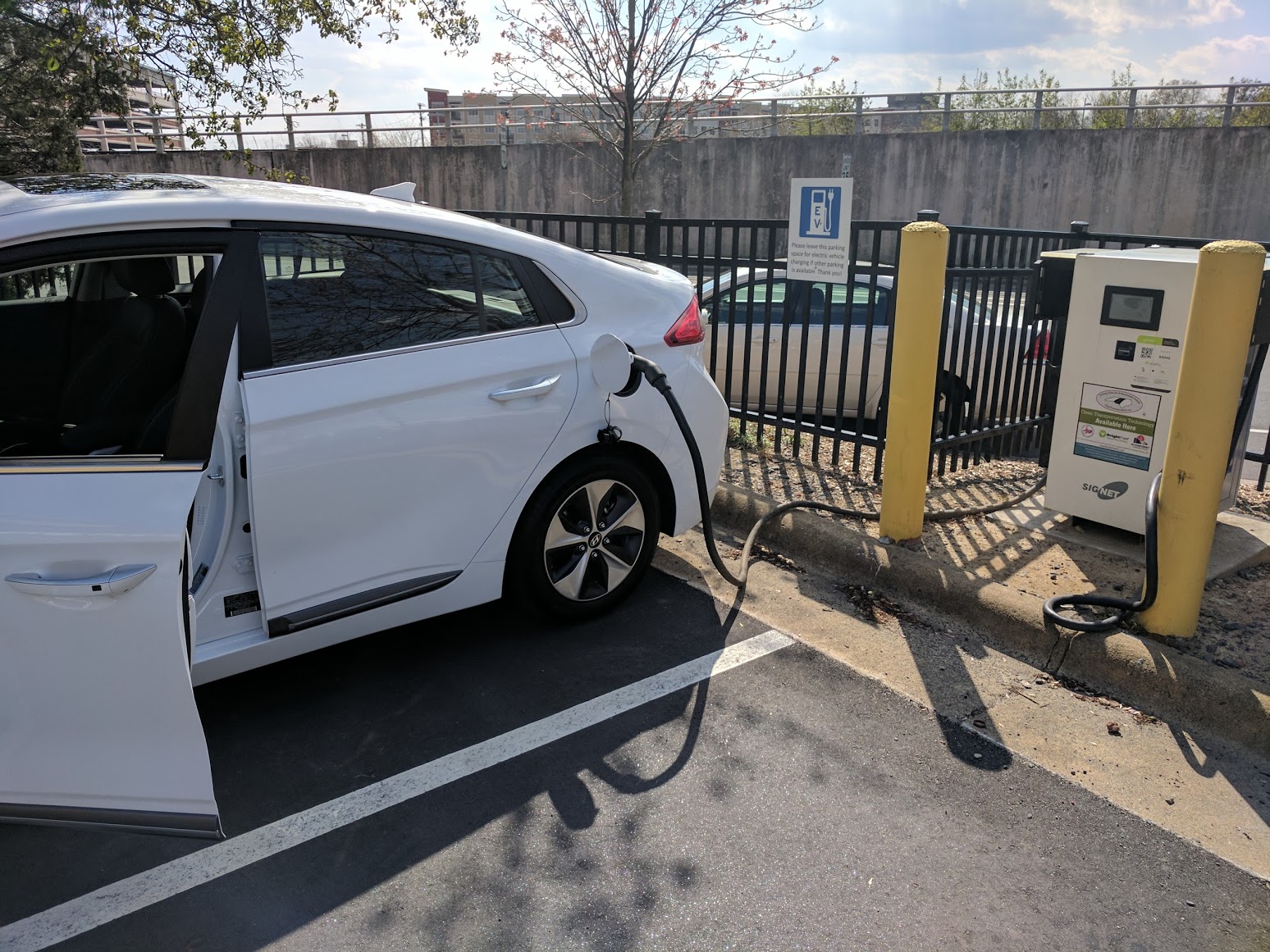 A huge surprise from a Korean company, the CCS combo adapter (standard) is used instead of the Chademo adapter that Japanese and Korean cars typically employ. This decision might be the nail in the coffin for Chademo and the decision was a good one in my opinion. With 100kW charging capacity, the IONIQ can charge faster than the Chevy Bolt for the first half hour clocking in 99 miles in 23 minutes on a hard to find 100kW CCS charging station. While on the more common 50kW charging station, it can add 99 miles in 30 minutes.  This is about 9 miles more than a Bolt adds in the same amount of time – despite the Bolt’s faster 54kW charge rate, the Ioniq is a much more efficient car and thus gets more mileage from less electricity. The problem of course when we are thinking of cross country travel is that the Bolt/Tesla goes 3 + hours of highway travel on a charge vs the under 2 hours of the IONIQ between charges. Think 90 minutes of driving, 30 minutes of charging. Repeat.

To me, that 125 miles makes the IONIQ still more of a commuter/2nd car than a Bolt or certainly a Tesla. The 100kW charger is a nice addition but in reality you aren’t going to want to travel long distances here – at least not regularly. 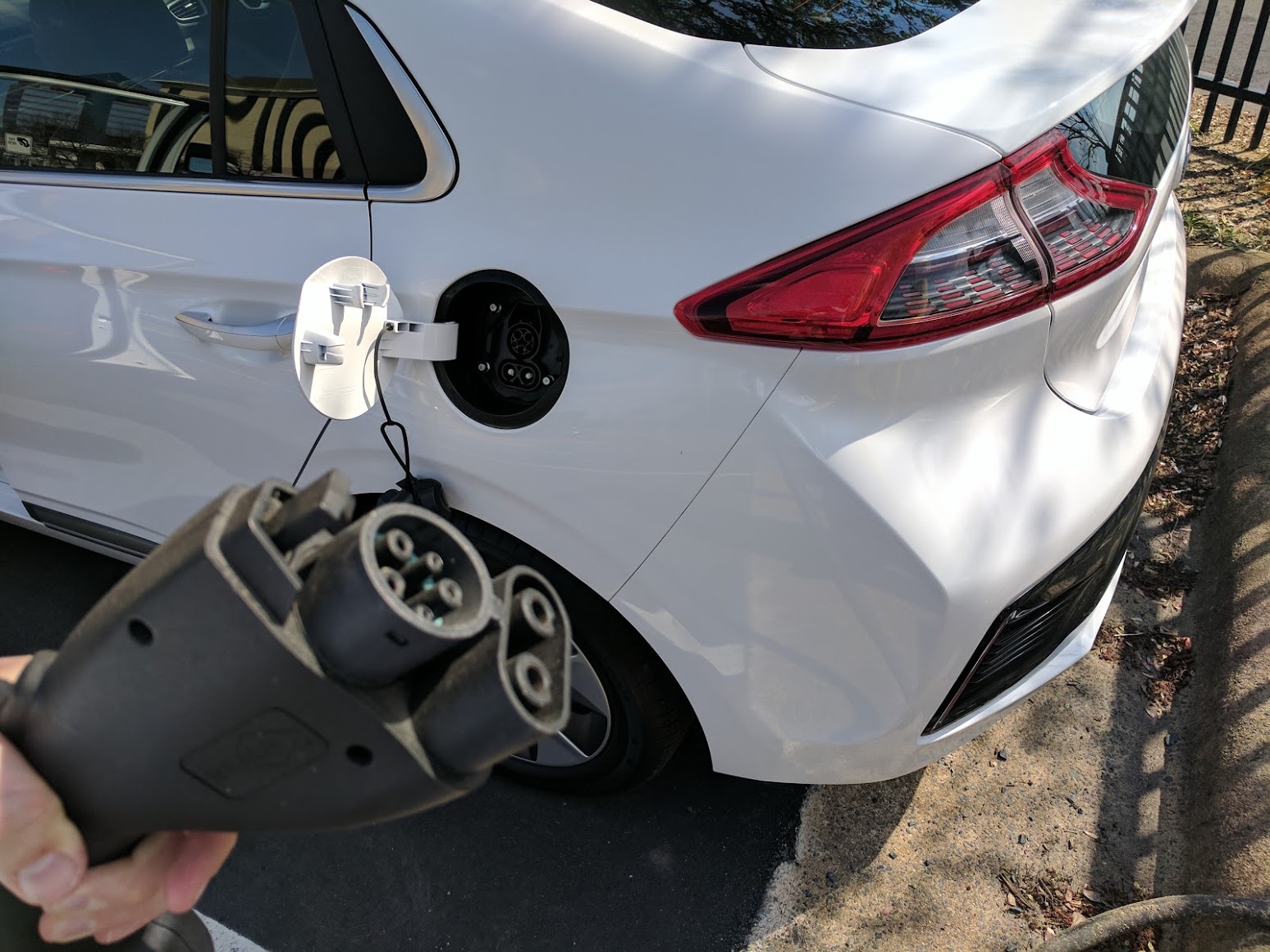 As for charging at home, the IONIQ comes with a Level 1 charger that will be enough to get around 60 miles of range per 12 hour night or about 40 miles per 8 hour work day. Certainly respectable and more miles per hour of charge because of the car’s high efficiency, but many will opt for a 240V charger which will fully charge the IONIQ from dead in under 4.5 hours. At 6.6kW, it isn’t as fast as Tesla or Chevy’s charger, but you’ll wake up every morning or finish every workday with a full charge which is what Level 2 chargers are meant to do.

Hyundai’s biggest innovation for the IONIQ might be its new “Subscription model” pricing option. For a flat fee which hasn’t been finalized, you’ll be able to rent with unlimited miles an IONIQ EV for 3 years at a set monthly price. The subscription price will include Title, License and Dealer fees and be $0 down after incentives. It will also include scheduled maintenance and wear which isn’t much on an EV and even some charging options. 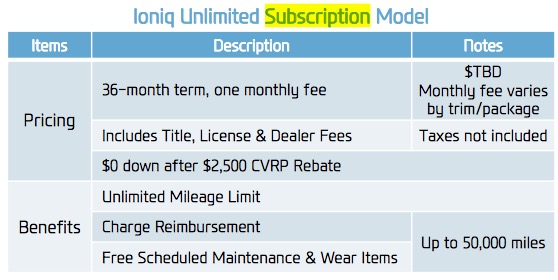 I love the Hyundai IONIQ EV and many of the decisions the engineers made on this vehicle. At around $19-23,000 after $7500 US tax credit and various state incentives, it is the cheapest EV I’d recommend and opens the EV segment to a whole new swath of the population. If Hyundai is able to communicate the total cost of ownership to its customers, I think it could be a huge hit.

Take the slide below as an example. The IONIQ EV costs $.81/25 miles to drive over the life of the car. Compare that to Most EVs around $1 and Hybrids over $1 and of course, ICE vehicles are over $2. That is a significant savings – about a third the cost of a typical ICE car. If you drive 2500 miles/month, that’s savings of $150/month which runs up pretty close to the leasing price of this car. It is almost free! 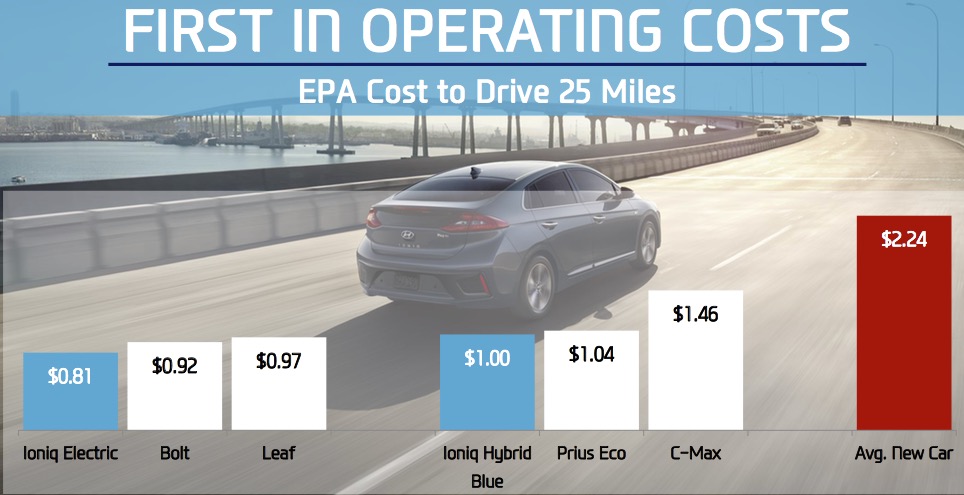 Add in that it is reasonably speedy and sporty, has features like CarPlay and Android Auto, roomy interior and cargo space and overall great feel, it is hard to imagine folks looking to save significant money with a $20,000 budget and need for a 2nd/commuter vehicle passing the IONIQ EV up. Oh, and that whole not destroying the climate thing, too.