The Electrek Review: The Kia Soul EV shows how easy it is to do electric

After my initial pickup/intro of the Kia Soul EV, I’ve spent the last week driving the vehicle as my daily driver. I normally drive a 2012 Prius Plug-in or a 2013 Tesla Model S so I know my way around EVs but this was the first time I’ve had the opportunity to really dig deep into both a Kia branded vehicle and a 100-mile range Chademo electric vehicle. I’ll spoil it a little saying that I was pleasantly surprised …

The Kia Soul EV is in many ways exactly what you’d expect if you are an EV optimist. It is so similar externally to the regular Kia Soul that most people don’t even recognize it is an EV. It lacks a gas input and has a hidden electric input on the front grill, slightly different lights and has some aerodynamic rims and low rolling resistance wheels. But besides those little nuances and of course the small ‘EcoElectric’ label on the car (below), it is pretty hard to tell this is an EV.

On one hand that is great –Kia didn’t put together a BMW i3-like “look at me, I’m a Freak EV” design. On the other hand, it didn’t really work very hard on this model which was born a compliance car and even after expanding, is still only sold at some dealerships in 10 states.

From a drive train perspective, Kia ripped out the gas tank and internal combustion engine and all of the bits that go with it. In its place (and about 3-inches into the rear seating/legroom area) it put 32.7kWh of batteries. Under the hood it switched out the 4 cylinder ICE with a tiny 109HP AC engine, but surprisingly capable engine thanks to 210ft/lbs of EV torque. On top of that is a charge controller and inverter. There’s a ton of empty space up there in the front that wouldn’t exist if this was designed as an EV first. 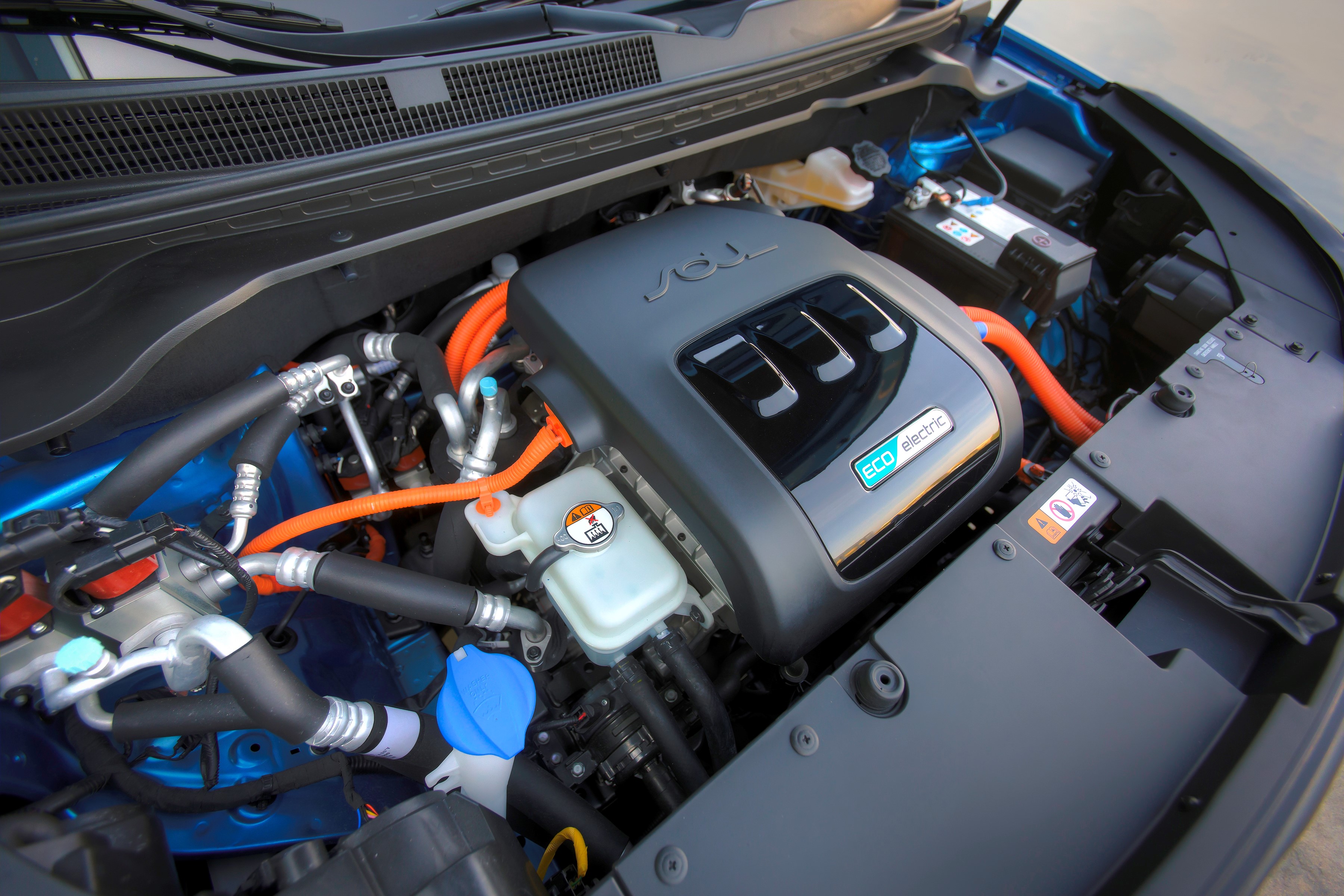 And that’s part of the bigger takeaway here: The Soul EV looks a lot like an amateur EV conversion than a car that was designed from scratch to be an EV. But somehow, this works really well. It seems so easy, really. Rip out the combustion bits and put in a bunch of batteries and an electric motor. Double the price.

The problems here begin in the details. The one I imagine is on many of the Electrek readers’ mind is range and charging. The 32kWh of batteries carry the Kia Soul EV around 100 miles but because of the box-like aerodynamics, that can mean significantly over 100 miles in the slow driving city or under 100 miles on the highway. Every time I fully charged the car I would get fewer miles of estimated range. 1st time 115 miles. 2nd: 105, last time was 95.  But I’ve been driving it hard so I guess it is taking that into consideration. 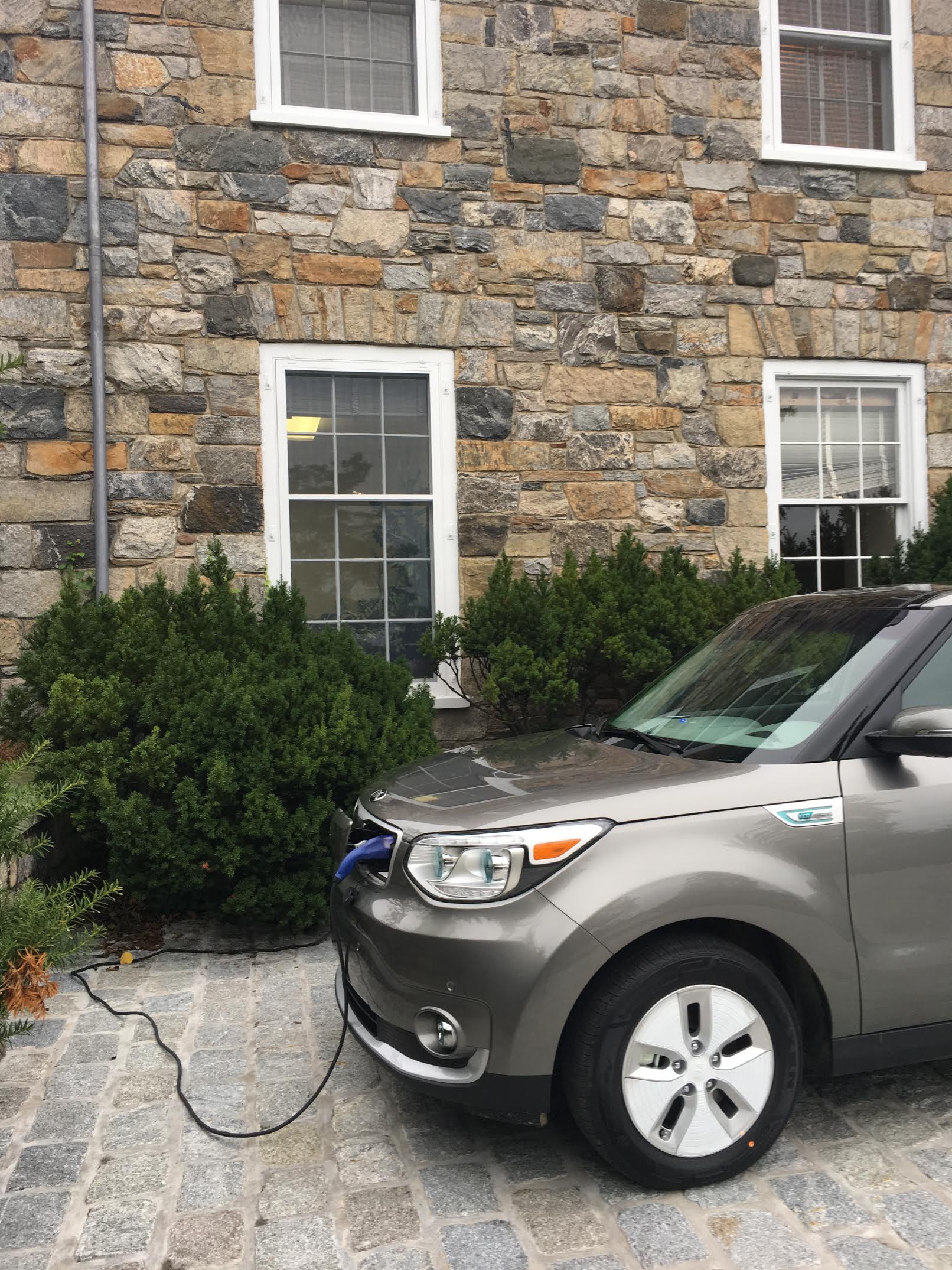 The big variance in range is fine and really you’ll see that to a certain degree in all cars, but what I thought would be an easy “fix” in DC Chademo charging access turned out to be a jerry-rig at best. I tried 3 different charging spots offered by evGo in my area -the nearest ChargePoint access is in New York City, over 40 miles away.

I was only able to get one of the 3 evGo stations working. On the other 2: one was broken (but I was still charged $10) and the other one was occupied by an ICE vehicle and a non-charging Chevy Volt (which was taking advantage of EV parking without actually charging – almost a worse offense than being ICE’d in my opinion).

The evGo station that worked did charge pretty fast (see previous post) but it stopped charging at 80% and turned off. I’m not sure if this was on purpose, a factor of the air cooled batteries vs. liquid cooled ones in higher end cars (which can take a stronger charge, especially when nearing completion), or it was just a fluke. 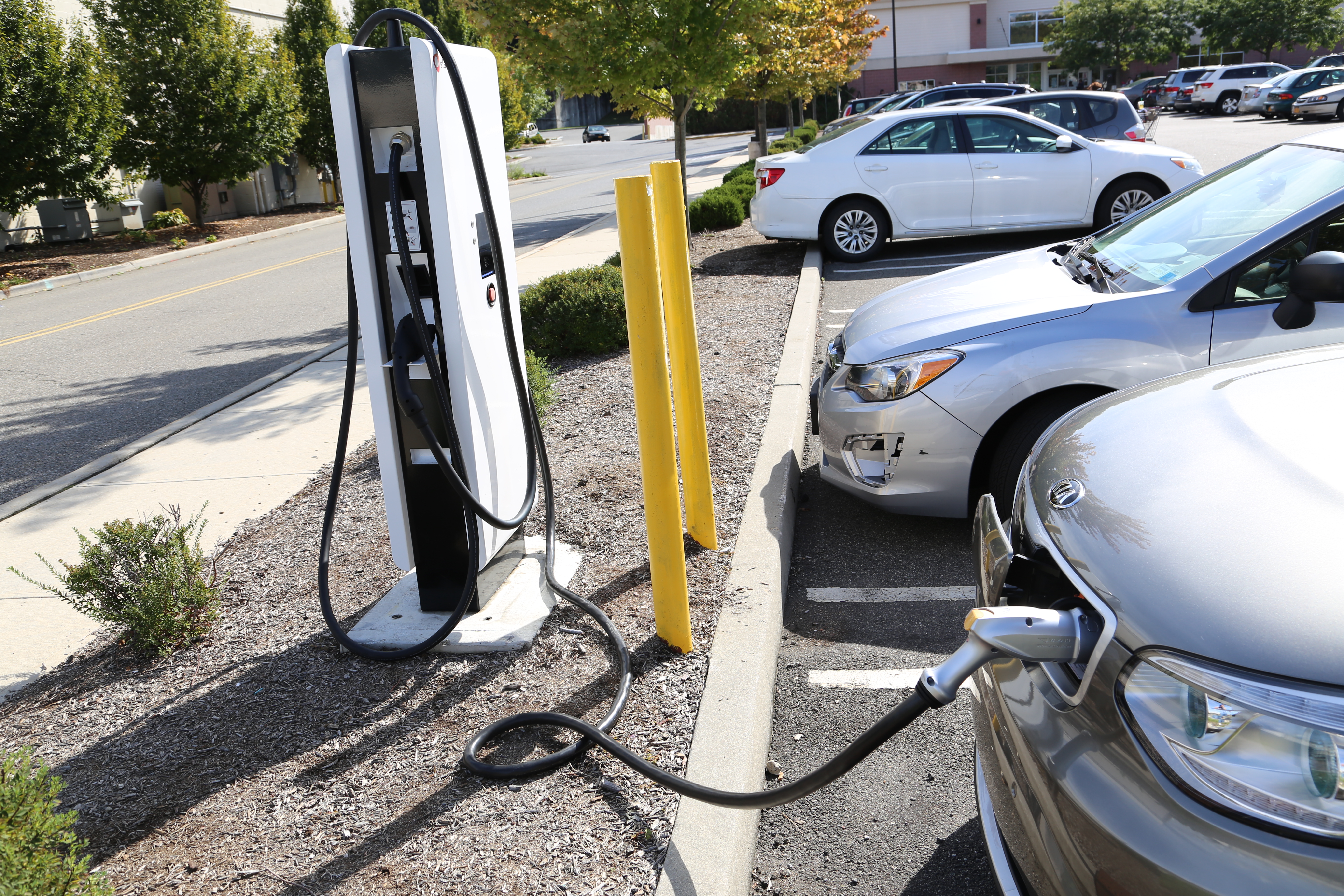 My takeaway on Chademo access is that it is very unwise to depend on DC fast charging at the moment. And that makes the 100 miles a pretty hard stop on range.

At home I charged using the 110V 12A charger that was included and an Aerovironment TurboCord. Here is one (of a bunch of) places where I think Kia should have taken a note from Tesla. Including a 110/240V level 2 charger (which have dropped to under $300 – not a lot for a car in the high $30Ks) would have been a huge improvement. 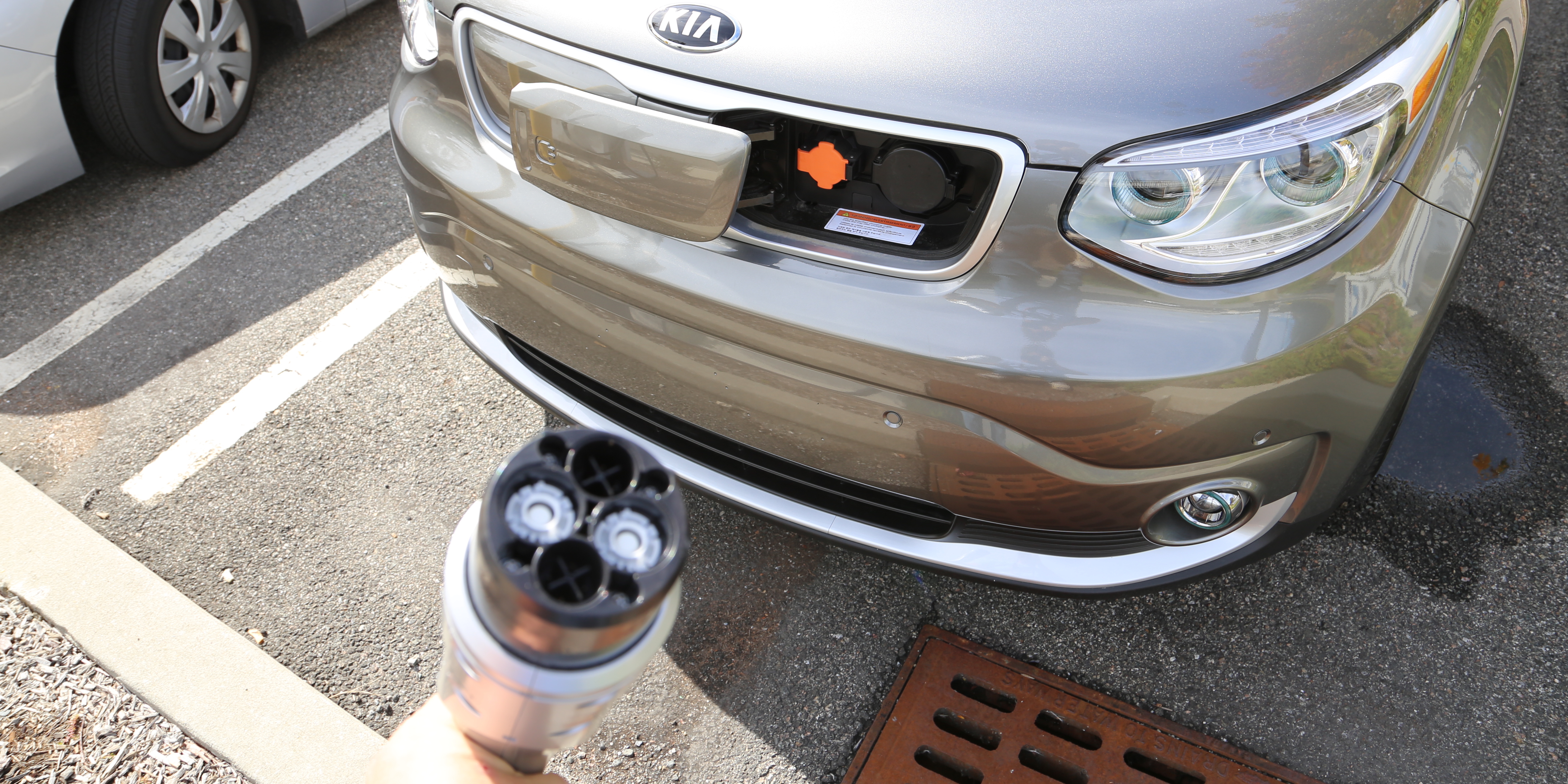 Home 110V AC charging puts on close to 5 miles per hour of charge and extrapolated out over a nightly 12 hour recharge time and you can expect to recoup 60 miles per night. Obviously if you can get it to 16 hours/per night – say 5pm-9am: 80 miles. The bottom line here is that unless you push your car very close to empty or you don’t have a lot of overnight charging, you are going to wake up with that 100 miles of range almost every morning. For ICE drivers, that’s like waking up every day with about a third of a tank of gas – not something that should induce any kind of stress. Also, if you are going to grandma’s house 80 miles away and can stay overnight, that means you’ve got a pretty good chance of making it back in the morning.

This is a 2016 Kia Soul EV which didn’t come with Apple CarPlay nor Android Auto. A commenter pointed out (and indeed we covered on 9to5mac) that an update was available via this crazy process. The car I got wasn’t updated, the rep somehow wasn’t aware it existed (“sorry, it is only available on the 2017 model”) and it didn’t have the SD card the update required. I tried to use a off the shelf SD card to do the update but it didn’t work. Nuts. I imagine people buying these things from dealers should demand that the SD updates are done. You also need that SD card for maps too. It isn’t an over-the-air update, but at least it isn’t a floppy disk! 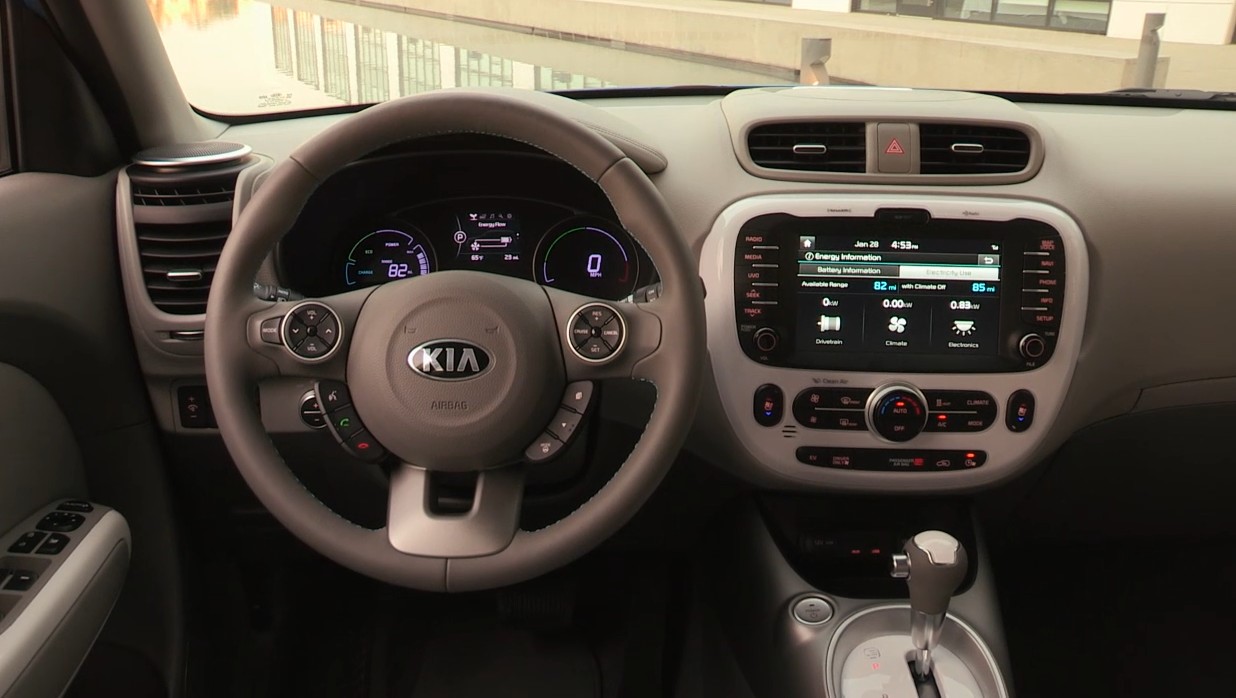 Low rolling resistance EV tires + 210 ft/lbs of EV torque = slipping. I got caught slippin’ on a number of occasions: On wet surfaces, going up hills, on gravel and generally speaking when gunning it, I felt some slippage. I know those extra miles are important but I wonder if some better tires for those 16-inch rims would be a good option. 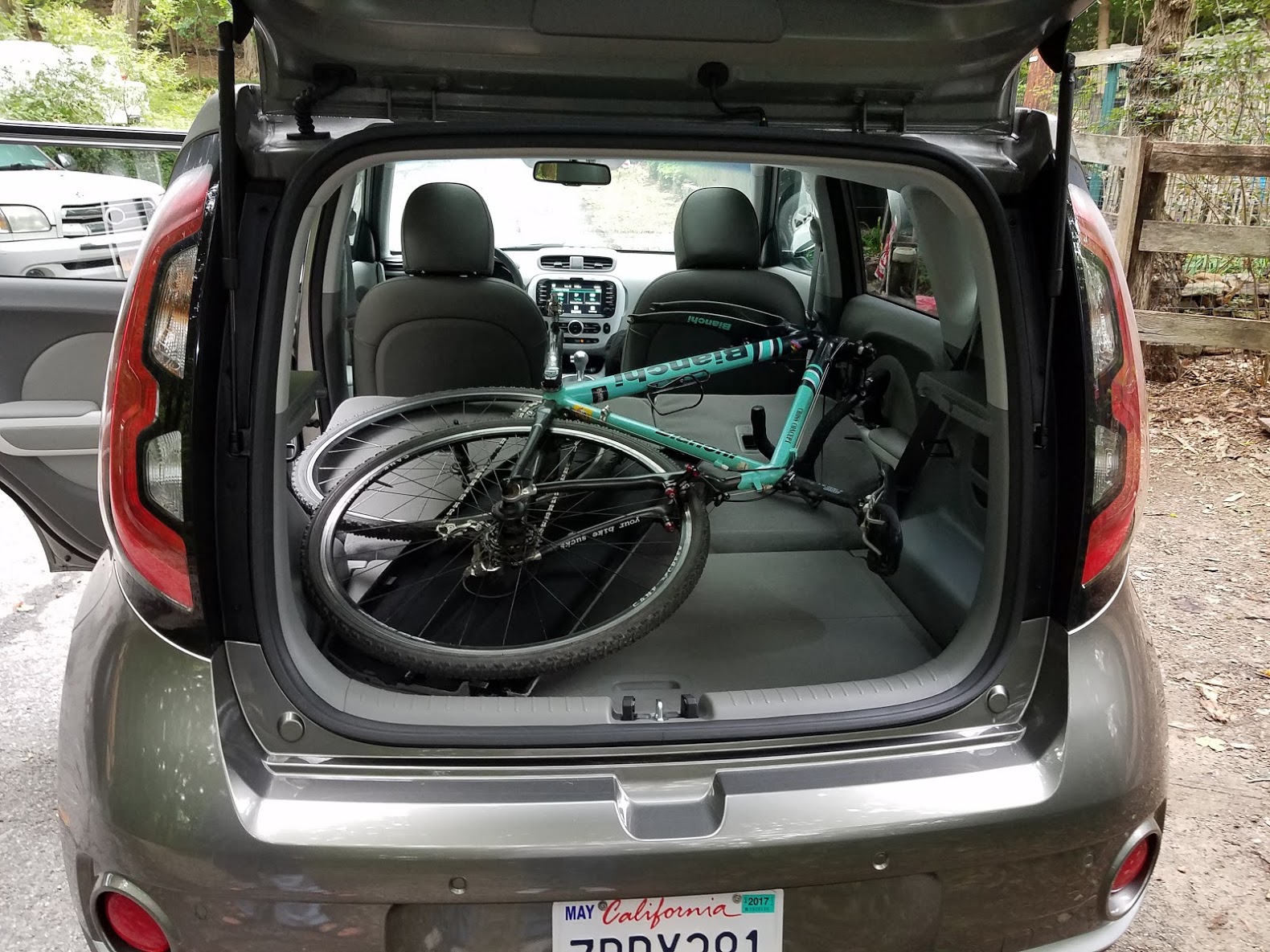 The Soul EV seats four people very comfortably. Even though the battery does take up some space vs. the ICE version, there is absolutely no problem seating 4 normal sized adults in this car. Five gets tight in the back but for kids isn’t a stretch at all. The trunk room is shallow but at 50 cubic feet overall, there’s plenty of room in here. 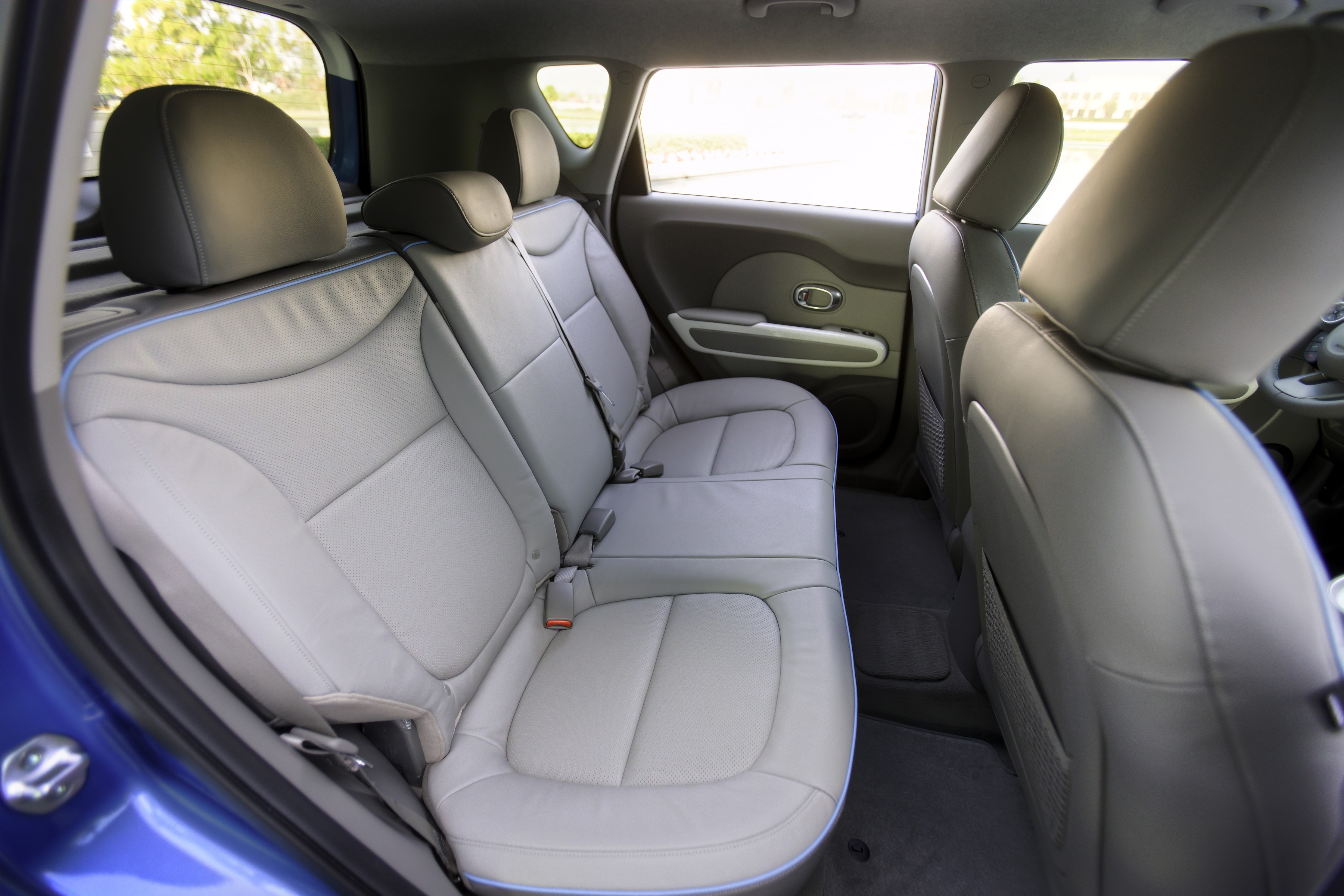 The moon/sun roof is very cool and provides lots of perceived space for the folks in the back. I’d definitely recommend this option.

So what do I really think?

This car is great for commuters…but…

For those 90% of us that commute less than 40 miles a day and/or have charging options at work, the Kia Soul EV makes a perfectly adequate car. I’d even say it is a nice car and way better than most ICE options out there. It is pleasant to drive. it offers ample storage and it is one of the only EVs to ride higher than a typical car.

But the elephant in the room of course is that the Chevy Bolt is coming in a matter of months. It offers similar size and utility but because it is designed as an EV first, it packs double the battery for over double the mileage in a relatively similar form factor. It is also faster and sportier and it costs about the same price.  Those 238 miles are a huge difference and there isn’t really anything about the Kia that would sway me from getting a Bolt – besides GM’s corporate practices perhaps. In my initial test drive of a prototype at CES, I loved the Bolt. We’ll see how GM does with the details.

Without the Bolt however and obviously the Tesla Model 3 and Model Y coming in the years ahead, this car would be a definite buy. As it stands however, I don’t see a reason to get this over waiting for a Bolt again or a Tesla…unless you can grab a really good deal, soon.