Tesla Model S caught fire in Yorkshire, Tesla says cause is due to a crash 2 months before the fire

Tesla has been under scrutiny before over several instances of vehicles catching on fire. The media made a big deal out of it despite the fact that almost every instance happened after a high-speed accident. Statistics showed that Tesla’s vehicles caught fire significantly less often than the national average and NHTSA eventually conducted an investigation and found no problem.

But on other (rarer) occasions, Tesla’s vehicles caught fire without being involved in an impact, like a Model S catching on fire during a test drive event in France and another one in Norway burned down while Supercharging.

We now learn of another fire that is somewhat in-between the two types of fires.

In October, Philip Coates from Yorkshire parked his Model S 70 at his mother’s house without plugging in the vehicle for charging.

He told Electrek that about an hour later, he realized that his Model S was on fire and called the local fire department.

They were able to extinguish the fire since extraordinarily, the battery pack didn’t catch on fire which would have been much more difficult to stop.

Coates’ insurer investigated and told him that they tracked the origin of the fire to a “condenser for the BMS” located behind the bumper – near the wheel well.

Here’s a picture of that section of the vehicle after the fire: 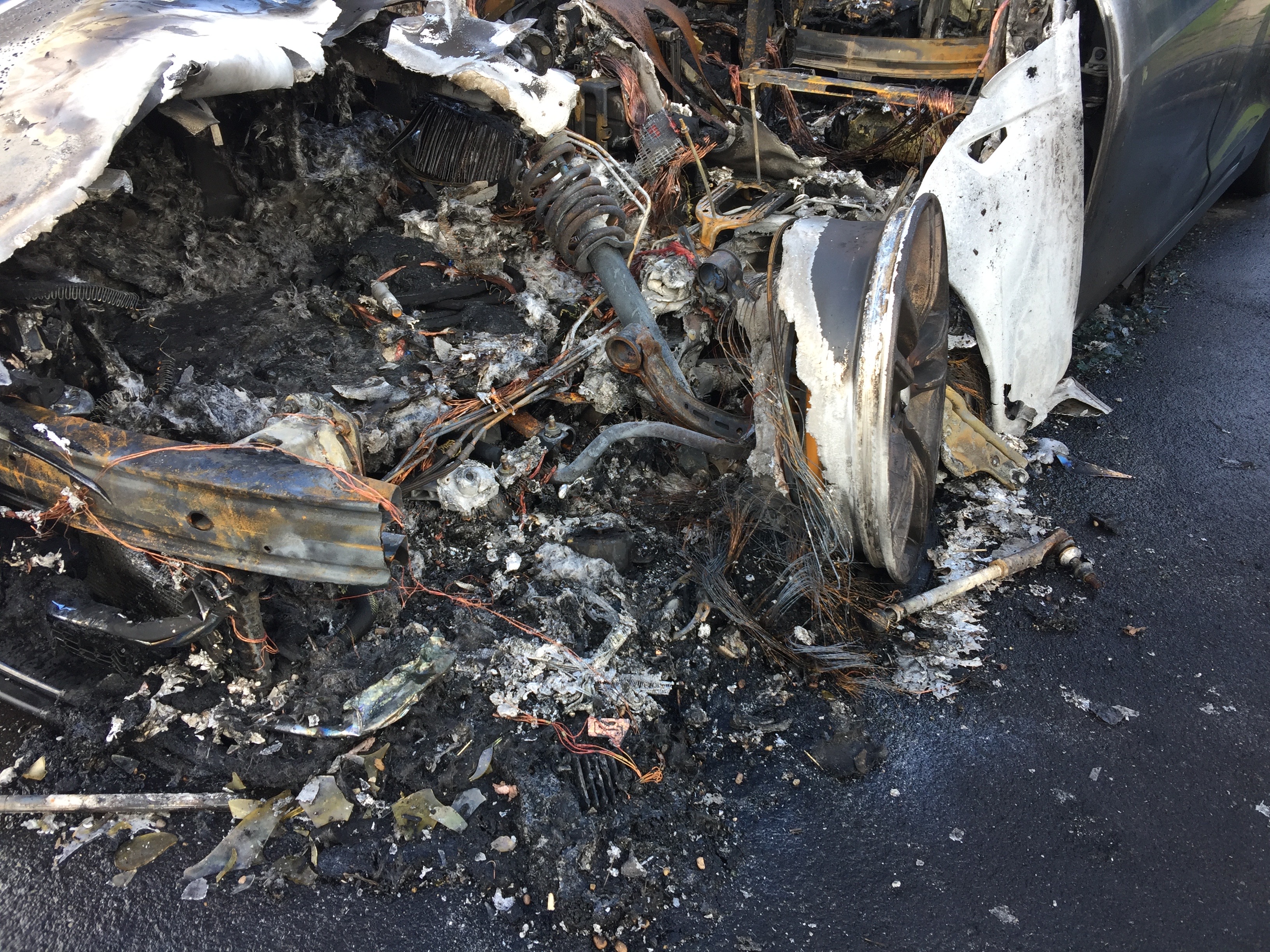 Since the vehicle was under warranty, Coates assumed that Tesla would pay to have it replaced, but the company wouldn’t and instead claimed that the cause was most likely damages that occurred in an accident prior to the fire.

“Tesla commissioned an independent investigator to determine the cause of the fire. We concluded that the fire in all probability occurred due to damage related to an earlier crash that the vehicle had been involved in. We are working with our customer’s insurance company with a view to ensuring that the customer receives full compensation for his loss.”

The accident happened over 2 months before the car caught fire. According to Coates, it was a relatively minor accident. As he described it to Electrek:

“I was approaching a roundabout and the person in front stopped for no reason at all while I was looking to see if any traffic was coming and collided with them, the impact was around 10 mph.”

The front bumper and the hood were damaged, but the vehicle was drivable without any alert: 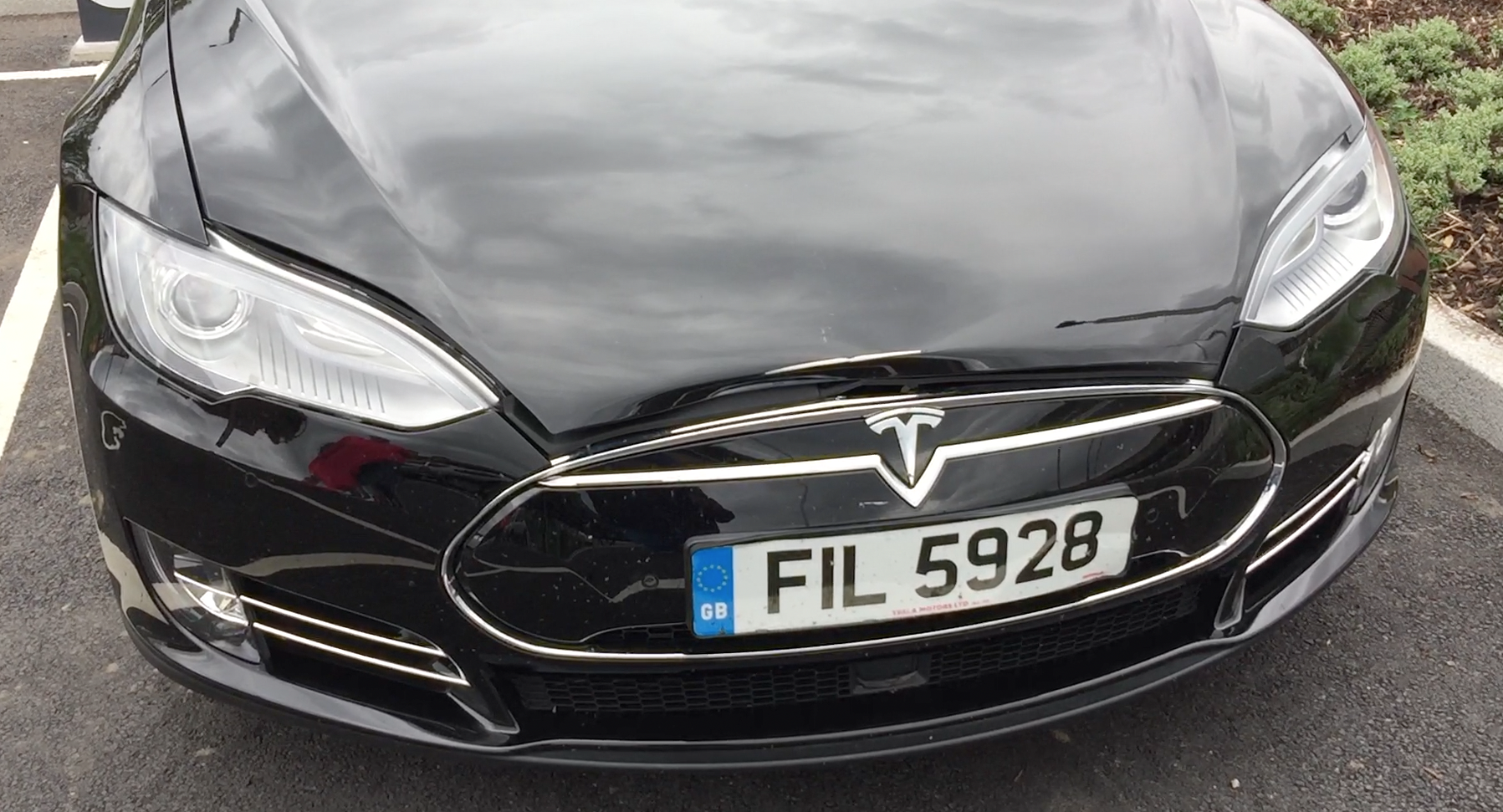 He said that even the Autopilot worked despite the radar being located in the front bumper. Only the parking sensors were not working.

The Model S was brought to a Tesla Approved shop to conduct the repairs. As evidenced by the bill, they extensively checked the vehicle for any problem:

Ultimately, the repairs were completed on September 23rd and were mostly aesthetic in nature.

Coates says that his insurer dismissed the idea that the fire was caused by damages that occurred during the accident. Nonetheless, they paid Coates back and he was able to buy a new Tesla.

The only other instance of a fire that comes close to those circumstances was a Model S that caught fire earlier this month in Shanghai while it was parked at a Supercharger without charging. Tesla is still investigating the cause.

As usual, it’s important to note that car fires are not exactly unique to electric vehicles. Ford just had to recall 570,000 vehicles due to a risk of engine fires.

Update: a reader pointed out something interesting in the comments from Elon Musk’s blog post about the risk of fires in Tesla’s vehicles:

Third, to reinforce how strongly we feel about the low risk of fire in our cars, we will be amending our warranty policy to cover damage due to a fire, even if due to driver error. Unless a Model S owner actively tries to destroy the car, they are covered. Our goal here is to eliminate any concern about the cost of such an event and ensure that over time the Model S has the lowest insurance cost of any car at our price point. Either our belief in the safety of our car is correct and this is a minor cost or we are wrong, in which case the right thing is for Tesla to bear the cost rather than the car buyer.